Islam is Not up for Negotiation 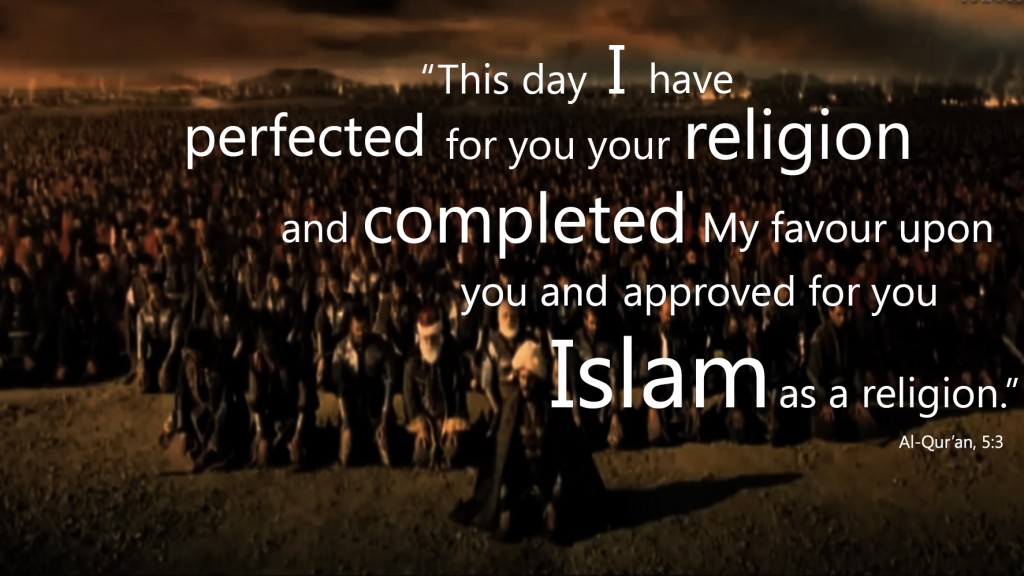 The “reform”-deform project has been engaged post-War on Terror on the pretext that, following the doctrine of pre-emption, there is, in the words of Douglas Murray, a “problem with Islam” because a Muslim has behaved in an (ironically, un-Islamic) unsavoury manner.[1]  This logical bent has seen funded voices clamouring to present their unique version of Islām and issue the call to deform Islām into one which is concomitantly subservient to Western hegemonic interests.[2]

The Intellectual Failure of Deconstructing Islām

Neocons and various deformists normally associated with the counter-extremism organisations project a concerted effort to inject uncertainty in Islām through postmodernist deconstructionism. This has given rise to free-for-all hermeneutical gymnastics of Islamic source texts. Thus, established legal doctrines are undermined,[3] creedal discourses are distorted and conflated with legal views,[4] or, taking the Ayaan Hirsi Ali approach, calls are made to drop verses of the Qur’ān because some choose to interpret them in their own destructive way, i.e. in precisely the same way deformists encourage.[5]

The dominant Western narrative is that Islām should undergo deformation in order to comply with secular liberalism, modernity and progressivism.

In addition to the abject failure to convince Muslims of such a need, there are a series of fatal flaws with the deform notion, some of which I have already addressed in previous articles. The first is that this requires twisting and distorting Islamic texts (as highlighted above) which no credible jurist will permit.  Secondly, the demand of Islām to contort or “convert” to the “universality” of human rights – being rooted in Western, Christian, Eurocentric and liberal conception of “human rights” – is hollow. As I have aptly demonstrated, such a demand is fraught with problems of a non-universal, ambivalent nature.[6]

“The liberal project is in effect a missionary project to convert Islam to the “highest stage” of Christianity reigning in the West [i.e. secularism rooted from Protestant Christianity], even if this is carried out under the banner of a “reformed” Islam.”[7]

Thirdly, uncertainty is also born from the associated “progressivism” as espoused by the likes of Nawaz, one need only review his attacks on the Left,[8] and the born-again neoconservative “Muslim Reform Movement”.[9] Constitutive of modernity and Enlightenment rationalism is the doctrine of progressivism, i.e. a movement towards “civilisation”. In its blind desire to run from history – its own history of problems which did not afflict the Islamic world – it posits science and reason as the modes by which to attain and designate the “truth” of the present. Yet this truth of the present is to be superseded by a further set of truths establishing perpetuity of ever repealing truths, never fully justifying whether the forgoing truths were superior or inferior from a moral perspective. In other words, “progress” is ultimately self-referencing – its own god. It is uncertain, fluid and essentially docile and vulnerable to the intellectual repression of the pre-reform Church variety as demonstrated by the neoconservative-cum-Quilliam attitude towards mainstream Muslims. This is projected through the intolerant “muscular liberalism” policy, and the imposed extreme secular liberalism of the equally dogmatic counter-extremism strategy. It is, in the words of the German philosopher Max Scheler, “the Western thought-structure of domination”.[10]  Such dogmatism, contrary to Nawaz’s claim of “non-dogmatism”,[11] intrinsically enables supremacy. It thus arrives at the precipice of an undeniable reality: that the intellectual justification for imperial colonialism, which destroyed the Islamic paradigmatic structures of society and unsettling the unprecedented stability in the lands it governed, are resurgent once more. The doctrine continues to destroy the natural order, from nations, through their past and present day imperial colonialism and the “arms race” which has brought forth devastating technology to kill, to the deregulation and unfettered growth of corporations at the expense of society, environment and wildlife. Islām was never a barrier to the pursuit of worldly, scientific knowledge, but, in stark contrast with progressivism, its moral grounding in divine scriptures ensured boundaries were maintained.

Conforming to what Neocons Reject

Perhaps the greatest of ironies in the deform project is that it is driven primarily by neoconservatives who categorically reject liberalism, modernity and progressivism. It is a spectacular display of deception and hypocrisy.

“…liberals were wrong, liberals are wrong, because they are liberals. What is wrong with liberalism is liberalism…”[13]

“Secular rationalism has been unable to produce a compelling, self-justifying moral code… and with this failure, the whole enterprise of secular humanism – the idea that man can define his humanity and shape the human future by reason and will alone – begins to lose its legitimacy.”[14]

His son, William Kristol has also stated that neoconservatism’s “more fundamental mandate is to take on the sacred cow of liberalism – choice”.  Following Strauss and Kristol senior, Douglas Murray calls equality – including racial equality – a “piece of false or bad logic”.[15]

As for the doctrine of progress, neoconservatives advocate a return to a closed society based upon fascist, imperial principles, governed by pre-modern ideas.[16] Kristol argued that America was required to start the “long trek back” explicitly towards “pre-modern political philosophy”.[17] By “pre-modern political philosophy” he meant the Straussian-Platonic conception of the ideal state which is encapsulated in the oligarchic society marked by immanent inequality.[18]

Why should Islām, then, be forced by neoconservatives to undergo a deformation in line with those ideologies which neocons themselves regard as obsolete? If neoconservatives see modern ideologies as producing a society which they believe is philosophically bankrupt then, by implication, the call to deform Islām concordant to modernity, liberalism and progressivism, is a deliberate call to trigger failure in the faith.

Deform and Fostering Hatred of Islām

If the deform project is a failure amongst mainstream Muslims, who then is the target of the rhetoric of the likes of Nawaz, Hasan et al? Indeed, what purpose does this deform project serve?

A brief look down the social media timelines of the deformists show that their supporters include those who hate Islām, such as the far-right, and hawkish pseudo-secular liberals who require affirmation of their own insecurity, superiority trips and prejudices. In short, deformists seem to be fulfilling a very neoconservative objective, which will now be further explored.

Put simply, in order to manufacture the Machiavellian enemy of the West, neocons have for years attempted to create hatred of Islām. Deform efforts reinforce the suggestion that there is a problem with Islām itself.

Of pertinence is the fact that Quilliam was founded under the “advisory” of Michael Gove, who sees normative Islam as “Islamism”,[19] and therefore an enemy open to securitisation and discrimination. Githens-Mazer and Lambert, explain the function of organisations like Quilliam. They state that, according to Charles Moore and Dean Godson of Policy Exchange,

“[such organisations are a] re-make of a 1980s Thatcherite counter-subversion strategy in which [Quilliam’s Ed] Husain is cast in the role of Frank Chapple the “moderate” trade union leader who was, they suggest, used to discredit and undermine the “extremist” miner’s trade union leader Arthur Scargill.”[20]

The general themes found in the rhetoric of Quilliam and neoconservative assumptions in books like Celsius 7/7 are shared with US neoconservatives like Daniel Pipes.[21] Githens-Mazer and Lambert, noting that the focus on ideology has “no credible evidence”, state,

“…it is one that Husain shares with influential thinktanks including [Gove’s] Policy Exchange and [Douglas Murray’s] Centre for Social Cohesion in the UK and Daniel Pipes’ Middle East Forum in the US.”[22]

In a revealing passage from a 2005 interview with Pipes, the aim is made clear:

“According to Daniel Pipes, it is now important to find alternative leaders and ideas that can take up the fight against militant Islam. “In the confrontations with fascism and communism, we were victorious because we managed to marginalize the enemy’s ideology, making it look repulsive in the eyes of the majority.””[23]

This is the neoconservative objective.  To make Islām look repulsive in society. The façade of Quilliam and various other deformists as representatives of the “alternative leaders and ideas”, which Pipes speaks of, are the tools to achieve this purpose.

Disconcertingly, neocons have achieved the aim of creating a “repulsion” of Islām. According to a Yougov poll last year, 56% of Britons regarded Islām as “a major” or “some” threat to Western liberal democracy – a ten percent increase from the figure taken soon after the 7/7 bombings.[24]  There is now a climate of anti-Muslim animus, where the press and politicians can freely associate crime with Islam in a manner echoing Nazi propaganda about Jews.[25][26][27] The manifestation of this hatred of Islām and association of criminality now sees women in ḥijābs brutally attacked,[28] and a defenceless pensioner on his way to the mosque killed by a white attacker who cites stereotypes endorsed at the highest level of government.[29][30]  In short, neoconservatives and pro-Israel activists have successfully conditioned xenophobia, anti-Muslim hate and discrimination of the Muslim minority at the policy level, which has, to a large extent, permeated society.

Questions must be asked.

Is the neocon tool of persuasion, argumentum ad metum,[31] which fosters prejudice against a minority resulting in violence against the vulnerable, a benefit or threat to social cohesion?

Are those who advocate totalitarian, closed-society policies, those who subvert democracy and actively promote a clash of civilisations from the pulpits in Parliament a threat to Britain?[32][33] Or are Muslims the threat, those who believe themselves an integral part of Britain despite experiencing cold-war era subversion strategies of repression?

Despite the attempts to dissect the hearts of Muslims, Islām will survive these culturalist attacks to the dislike of neocons. Introducing uncertainty into any system, be it one grounded in physics or the metaphysics of modern law, would undoubtedly lead to anarchy and ultimately destruction. How, then, can Muslims accept such uncertainty in their faith?

The message is clear: Islām is not up for negotiation.

“[This is] the revelation of the Book about which there is no doubt from the Lord of the worlds.”[34]

“This day I have perfected for you your religion and completed My favour upon you and have approved for you Islām as religion.”[35]

“The best of people are those who bring the most benefit to the rest of mankind.”[37]

[17] Kristol I., Reflections of Neoconservative, p.76, as referenced in Thompson/Yaron, Neoconservatism: An Obituary for an Idea, Boulder: Paradigm, 2010, p.87

[18] As alluded to in the Allegory of the Cave. C.f. https://en.wikipedia.org/wiki/Allegory_of_the_Cave