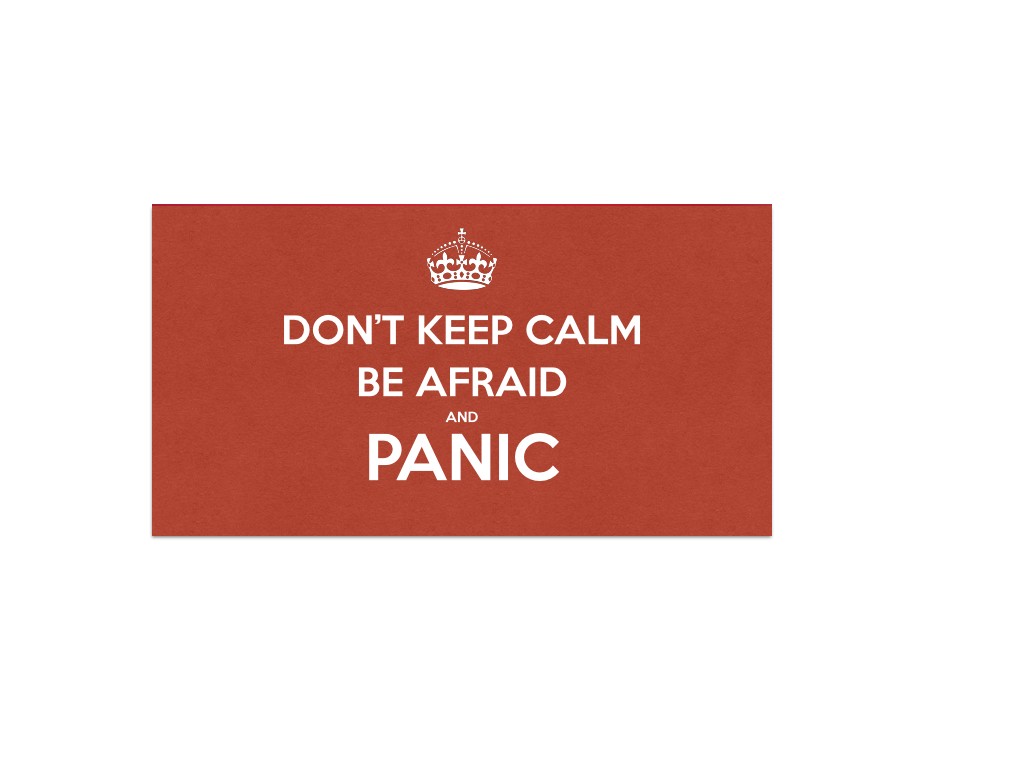 As someone who lived in London during part of the IRA bombing campaign I remember the “Keep Calm and Carry On” attitude. I came out of a building on Regents Street one evening, not realising I was in the middle of an area that had been cordoned off by the bomb squad. I got pulled into a doorway by a policeman while a controlled explosion was carried out a few hundred yards away. I never found out if it had been a live bomb or not as nothing was later reported about it on the news. Fast forward to today and, instead, there is a heavily promoted call to “Be Afraid and Panic” at the slightest thing and I find myself unwittingly playing the part of the suspicious package.

Back in 2011 Baroness Warsi declared that Islamophobia had “passed the dinner table test”. A rather cute way of saying that casually hating Muslims is the socially correct thing to do. Now in 2015 it has clearly passed the “saying it out loud on public transport test”. Within a week social media saw and, to its credit, helped apprehend two blatant Islamophobes caught on camera trying to fight a pregnant woman and a man who needs a walking frame. Not a few seconds of bad temper but each was 5 minutes of extreme frenzied hatred against people they had never met before. Bad enough that no one had offered either a seat in the first place; bad enough that no one came to their aid and in both cases the driver, who must have been fully aware of the aggressive ranting which could have easily turned violent, just carried on his route. Presumably he would never finish his route if he had to stop every time someone aggressively screamed abuse at disabled and pregnant Muslims.

The government will of course have to be seen to deal with these incidents. Both abusers handed themselves in and quickly apologised for getting caught, seeming to know how to play that game.

Some take matters further like the man who entered a school in a predominantly Muslim area in Sweden and started randomly killing people with a sword. Well, it will be portrayed as random by the press and governments who do not actually want to get to the bottom of why everyone has agreed consciously or subconsciously to hate Muslims, because they know very well whose fault it is. They will instead pin the blame on an older far right ideology, not their own.

In something akin to the holders of Third World debt giving those same poor countries a hand-out of foreign aid the Tory coalition set up sympathetic sounding working groups to tackle Islamophobia. They set up the ‘All Party Parliamentary Group on Islamophobia’ and ‘The Cross-Government Working Group on Anti-Muslim Hatred’. The latter was set up to “tackle head-on one of the core claims that violent Islamists make to ordinary Muslims: ‘western governments are not interested in helping you’.” After 4 long years of not working it out, one founding member finally declared: “the government was simply not that interested in anti-Muslim hatred. In fact, to my knowledge, and despite increased concern over extremism and disillusionment among British Muslims, the government has still not undertaken any research into what causes Islamophobia and what might be done about it.”[1]

Well that is a little telling. In fact, far from being interested in preventing Islamophobia it has become gradually more obvious that those in the government are the biggest long-term loyal supporters of it.

Back in 1997, the Runnymede Trust published a report titled “Islamophobia: A Challenge for Us All”[2] in which they decided that “Islamophobia was identifiable where: Muslims and Islam were represented as or seen to be the enemy, violent, aggressive, threatening, separate, and “other”.”

Instead of using the report to avoid or prevent Islamophobia, it seems the “leaders of the free world” have been ticking those points off like a to-do list on a handy manual of how to increase Islamophobia.

Of course there was no difficulty convincing the public that Muslims are the enemy once the West launched wars that no one even bothers trying to justify anymore against two Muslim countries and stood solemnly by as coffins returned home. To paint Muslims as violent and threatening came by the continual exaggeration of the danger faced in Britain after one violent attack on our soil now over 10 years ago, in extreme contrast to the “Keep Calm and Carry On” attitude we were previously so proud of. And now it seems the finishing touch was this season’s drive to convince the public of the unwillingness of Muslims to integrate and our “otherness.”

Ever careful though, just in case non-Muslims misunderstand attempts by Muslims to be a part of the decision making process in a democracy, who might naturally hope that things could be run in a way that takes into account their interests, as being the innocent and normal signs of an integration to be welcomed, the government simultaneously raised the spectre of “Entryism”. Now if you see a Muslim who does not appear to be integrated—maybe he works in a halāl butchers rather than Waitrose or wears a thowb instead of jeans—he is dangerously “isolationist”. On the other hand if you see a seemingly well integrated, overtly practicing Muslim in your workplace or local council you should be afraid and probably report him. He is an Entryist. The Western governments and the corporate media seem to have created perfection in Islamophobia propagation.

How pleased they would be if they read this chilling thread on a kindergarten teachers forum, to see that Islamophobia has now passed the kindergarten test:

Having just taken the latest online Channel training one teacher says: “To be honest I am a bit confused in this area as well. Still cannot understand how it can apply to children under 5 years of age.”

Another more enthusiastically replies “I would have to agree, but as ever it is “us” who have to begin the process I suppose.   Plus there are families who “disappear” maybe we could be the ones to notice subtle changes in the parents coming to our settings, or hear things said in role play by the little ones which they have overheard adults in their lives saying (how many parents think their children aren’t listening or have the ability to take on what is being said – so many parents talk about their partners, ex partners or troubles in front of their children and don’t consider what they are saying). We may even have staff members or students coming into our settings who could become radicalized.”[3]

The government have created an army of civilian investigators and informants from the militaristically termed Frontline Staff. Everyone who comes into contact with the public are being taught to single out Muslims, scrutinize them and if possible why not sneakily interrogate their toddlers to use their unguarded innocence to inform on their own parents. They can then consider if what they hear or see fits into the bogus sinister context that has been imprinted on their minds, so they can feel heroic for being the first to “out” a radical. Not a “terrorist” as this drive started with, or a “Violent Extremist” as it morphed into, or a “Non-violent Extremist” as its mission crept over to but now someone who simply chooses to hold opinions or ways of life that differ from the majority in this no longer pluralist society.

To save the nation from differences of thought Ofsted have assumed the role of “Chief Inquisitor” and are interrogating primary school children to eradicate Islamic beliefs and the institutions that teach them. Pity the condemned school where one 5 year old failed his ducking highchair test by saying it would be wrong of him to participate in music and dance,[4] which was then translated to “If I study music I’ll go to hell!” by the media.[5] Of course Ofsted inspectors and the public alike have been programmed to believe this heinous thought crime, which no one has proven is in anyway harmful to him or anyone else, is the first step on the also disproven conveyor belt[6] that leads to murderous fanatical tendencies in later life.

Will this inquisitor role be pushed out to the wider public? As a typically fear mongering Cameron said in his conference speech there is a “shadow of extremism – hanging over every single one of us.”[7] Sure enough Ian Hopkins the new Chief Constable of Greater Manchester Police recently said police would rely on members of the public “recognising the signs of when things are not right and when people are appearing to be radicalised and flagging those concerns.”[8] No doubt we should expect more propaganda aimed at the general public keeping them up to date with the ever-lowering bar of what constitutes “radicalisation”. There is no doubt at all now that the state is deliberately teaching the entire British population to primarily view all Muslims with suspicion; therefore to fear Muslims and be Islamophobic.

As a regular orthodox practicing Muslim I struggle to feel dangerous enough to warrant all this fear and attention so I do wonder if we are just the excuse needed to create a full blown Thought Police infrastructure. The interesting thing is how this framework of state and civilian snooping and informing is being accepted unquestioningly by many of those 95% non-Muslims. This weapon of control is clearly aimed at someone other than them and after so many years of constant Islamophobic propaganda from all angles, so much moral panic, and the box set binges of, so far, 50+ hours of “Homeland”, 86 hours of “Spooks” and 200 hours of “24” they would have to be deaf and blind not to believe Muslims need this kind of oversight.

The signs that this is not just aimed at Muslims are becoming clearer now that the infrastructure is in place. With the inclusion of people who spread conspiracy theories, any one of the 95% currently going along with this might wake up one day and find that questioning the system will simply place them one at a time and defenceless onto the list of harmful extremists who must be silenced.

One British value I used to take for granted was free speech but these days just writing what most Muslims are thinking I am expecting James Bond to crash through my window and shoot me between the eyes any minute now. GCHQ will probably be watching it happen through my hacked webcam. Number 1 on his list of targets during the crescendo of Cameron’s conference speech was to “tear up the narrative that says Muslims are persecuted”. So by critiquing policy, for saying it is a cause of Islamophobia, for saying it is a cause of right wing extremism, for saying it is persecuting us, he is promising to persecute us. Welcome to Tory British Values.