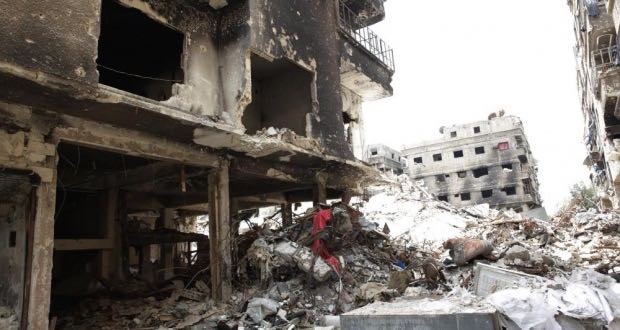 What does ISIS really want with the Yarmouk Refugee Camp?

Suspicion continues to increase about this organisation that calls itself Daaish or (non) ‘Islamic State’. Questions about its origins, its agenda and its financial backing only return ambiguous answers. Its skirmishes and battles in and around Syria are especially peculiar. Since its inception from nothing, from no religious or known political foundation, its main targets have been the Syrian resistance and the other factions fighting against the established brutal regime. Not long ago, ISIS threatened to carry the fight all the way to Rome. Strange then, that they never made any such threat to reach Damascus to topple the Alawite regime, despite Damascus being significantly closer.

Today, this organisation attacks the Palestinian Yarmouk refugee camp, which has been under brutal siege by the Syrian regime since 2013, after another crippling siege in 2012. More than 200 of the camp’s citizens have died from hunger and disease, while the relentless regime’s cutting off of water and electricity has created utterly detrimental conditions, slowly ‘annihilating’ the remaining populace at the camp.[1] This is not to mention the many families forced to eat grass and cats and whatever else they can find to preserve their lives. So why, then, does ISIS attack this refugee camp, inflicting heavy losses on those fighting against the Syrian Regime?

Before answering these questions, let us consider the most significant factions that have been opposed to the Syrian regime operating out of the Yarmouk Refugee:

1. Aknaaf Bayt Al Maqdis – this faction was founded before the siege on Yarmouk began, in March 2013, in order to defend the camp from attacks led by the Syrian Regime and its allies. The Arabic ‘al Quds‘ newspaper reports that this faction is predominantly made up of Palestinians and claims its affiliation to Hamas,[2] among other Palestinian groups who had supported the Syrian Revolution. Other sources report that these groups left their previous affiliations to unite under the banner of Aknaaf Bayt Al Maqdis after the various factions failed to unite under a single banner.

2. Jabha Al-Nusra – some sources claim that this group has a presence of 300 fighters in the camp. There is also a definite presence of a pro-regime sentiment in the camp, united under the banner of Fath al Intifadah, The Popular Front’s (al Jabha al Sha’biyah) General Command, and the Palestinian Jabha Al-Nidaal.

The declared reason for ISIS’s attack on the Yarmouk Refugee camp at the beginning of April is allegedly a form of revenge to the actions of the Aknaaf group [3] [4], who had previously arrested associates believed to have been involved in the assassination of a leading Hamas figure; Yahya Hawrani. He was assigned to head the camp’s humanitarian effort on the 31th of March and was killed ruthlessly by masked gunmen on his way to his work at Palestine Hospital at Yarmouk. Aknaaf’s attempt at arresting the perpetrators led to some minor skirmishes on the borders of Yarmouk, only to expand to an all-out ISIS assault. Despite resolute resistance by Aknaaf fighters, and vicious fighting inside the Camp, ISIS and its allies were able to take control of the majority of the Yarmouk camp. The fallout between Hamas and the brutal Syrian regime has resulted in the assassination of at least seven notorious activists in the latter half of 2014. [5]

ISIS’s declared justification does raise eyebrows. If the assassination of Hawrani was the direct reason behind its assault on the camp, notwithstanding that the attack made no other political or military sense, the only conclusion we can come to is that there is a some sort of mutual interest between ISIS and the Syrian Regime to quell resistance at the Yarmouk camp, something that the Syrian Regime had previously been unable to do. Accusations towards ISIS for the assassination only emphasises this, and its bloody sentiment against flags and defenceless civilians has not spared the remaining 18,000 civilians from the original 200,000 at Yarmouk.

What further points to this conclusion is the fact that the Syrian Regime used up to 20 explosive barrels during the ISIS onslaught, none of which reportedly targeted ISIS themselves. [6] This is despite the media outcry from Syrian and international outlets that ISIS is the one real enemy and threat. Not to mention the concurrent accusations levelled at the leader of the Popular Front, General Commander Ahmed Jibreel, that he assisted ISIS in entering the Yarmouk camp. [7]

Strategically, the biggest beneficiary from this adventure has been the Syrian Regime, which has long aspired to gain control over the Yarmouk Camp in order to protect Damascus’ four sides, particularly its southern and Eastern borders. It is well known that the location of the Yarmouk Refugee camp is of extreme strategic importance to protect the Damascus power base.

Yarmouk is a mere 7km from Damascus, and with Damascus ever expanding some people even suggest it is actually part of the Capital. Also, Yarmouk adjoins the area called Maidan; it is one of the front runners in protesting against the Syrian Regime and some of the very first people who lifted arms against the tyranny of the Syrian regime were from here. As well as this, Yarmouk lies in the heart of an extremely volatile area. In its North is the capital itself, and surrounded at its other three sides are the towns of Qadam, Tadamun and Hajar al Aswad, all struggling against the regime. By ISIS taking the camp out of the equation, this has solidified the Syrian Regimes position from the southern direction. With ISIS’s questionable resistance against the regime, often non-existent, the link between them and the Syrian regime is becoming yet more stark. Now its ruthless targeting of Palestinians and the Palestinian Islamic resistance, adds another streak of perversity to the ideology it espouses.