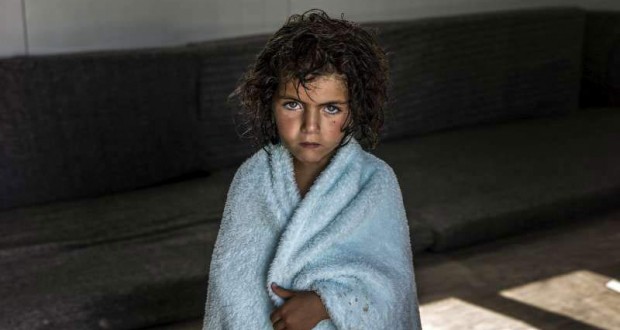 Class: I didn’t finish my education

Only these three short lines were written on the tag of an oil painting notebook owned by a little Syrian girl, a refugee residing in al-Zaatari camp in Jordan. I was touring one of the Youth Empowerment Centres at the non-governmental organisation (NGO) that I work for that operates on the Jordanian border. After stopping by this notebook, I asked the responsible adult volunteer who Rula was. I was told that she had left. I wish I had met Rula to hear her express her feelings and explain the phrases she had written. Through my experience in the Palestinian Diaspora and from statements of those who witnessed it, I have come to know that humans do not survive on bread alone. Humans need to keep a fine balance between every need.

My intention was to listen to her concerns and frustrations. I knew that it is not in my capacity to end the conflict in her country, but perhaps I could encourage her, teach her or develop in her a sense of belonging. Perhaps I can do my share to protect this vulnerable and vital layer of the refugee society; seeing this first hand, for the first time really put my potential in perspective. I am from the “developed” world and this is an invaluable opportunity to give something back to society. This requires assessing their needs, persuading them to adopt a coping strategy and perhaps encouraging them to justify their answers and input.

As we entered the Zaatari camp for the first time, officers advised us to use another entrance as refugees were hurling stones at cars and demonstrating for their ‘rights’. ‘Rights’ are deemed taboo for a Syrian refugee to ask, after all, “Is it not enough that we let them enter our territory?” as one officer in the heartbreaking scene said. At the other gate, police officers asked us why we were helping those “bad-tempered animals. Instead of giving them Musa’adāt (humanitarian aid) [we] should give them lethal injections.” Leaving Zaatari, I witnessed two young Syrian boys playing. Their play soon developed into a light fight. Never did it need a policeman guarding the camp to pounce on these boys, hitting them with full intent. After all, they are refugees, in need, destitute and helpless. Man’s inhumanity to man can be boundless and were it not for the consolation the oppressed will find on the Day of Accountability, what life in injustice could be bearable?

The Jordanian authorities, particularly low-ranking officers, have little understanding of what it is to be a refugee; to sleep rough in a tent, to be exposed to the heat and dust that makes children’s and adults’ skin red with soreness, to suffer from respiratory illnesses. These are only a fraction of the ailments that are rampant among Syrian refugees. Indeed officers are also exposed to some of these conditions, and I understand their concerns about maintaining security and attempts to protect everyone. However, deploying security should be a professional task and without the need to insult the subjects of their protection. Syrian refugees have very justifiable fears derived from the uncertainty of their livelihood, notwithstanding the somewhat hostile host environment and culture they now live in.

Another family was sitting with its children under the burning sun. The father—the head of the family—was very sick with a crippling fever and as such, could not pitch his family’s tent. If only I knew how to pitch a tent. I never expected that such a simple skill could save a family from the agonising harshness of the dessert. Can it be that this is all this family needed? I am grateful that I am part of a reputable NGO that endeavours to reach out to our brothers and sisters in faith and in humanity. Many times, our colleagues need to strike a balance between helping and being firm, so we can be consistent in our distribution of such limited resources. I always wonder what the situation of Syrian refugees would be if they were left to the mercy and moods of these low-ranking officers, without the supervision and very hard work of Institutions like the UN Refugee Agency (UNHCR), The United Nations Children’s Fund (UNICEF) or NGO’s like International Medical Corps (IMC), Save the Children, and so on.

Syrian refugees did not leave their country voluntarily, thus, they are not in Jordan to seek better life opportunities. An Arabic proverb can be translated as: “What obliges you to embark on a hardship is a greater hardship”. I hope that people and authorities treat Syrians on equal terms, not as rivals who are trying to outdo them. The poor state of their children does not grant us the right to humiliate them and hit them, rather it obliges us to help them with all of our capacity. They are suffering in a way that should induce the same sentiment as if they were our very own families.

Yazan has an MSc in International Development from Bristol University and is an ardent Palestine activist, taking part in many initiatives in support of the Palestinian cause. Yazan has engaged in arranging student exchange programmes between Gaza and the UK and is a keen researcher and academic on the issue, delivered research papers at universities including Oxford surrounding the Palestinian identity problem. Yazan left the UK just over a year ago to work with a relief agency working with Syrian refugees on the Jordanian border. Through this work, he has come heard many first hand accounts of the Syrian struggle and the suffering of the refugees. He is now a regular contributor for Islam21c alongside the Middle East current affairs team.