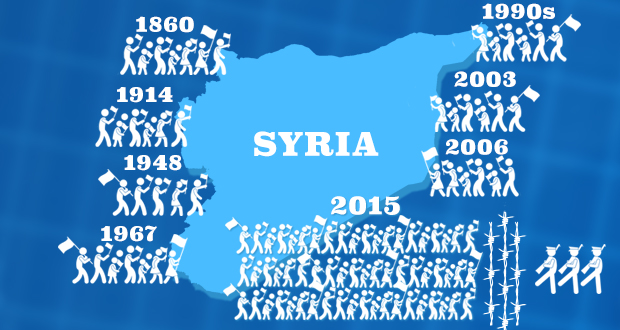 These will be those nearest to Allāh.

In the Gardens of delight (Paradise).

A multitude of those [foremost] will be from the first generations [who embraced Islām].

And a few of those [foremost] will be from the later time (generations).[1]

In a time wherein there exists multitudinous opportunities to attain such a status, why is it that the ‘Foremost’ on the Day of Judgement – those brought close to Allāh – will comprise of a majority from the first 30 or so years of Islām and only a few from the succeeding 1400 years? Never before have Muslims lived in such a borderless world, theoretically speaking, where opportunities are presented on a global scale. Comparatively, Muslims in the early generations of Islām were exposed to a small circle of humanity; they were limited to performing deeds of righteousness and attaining reward in the Hereafter with interactions solely within their immediate communities. An example of this can be seen in a narration detailing the attitude of Muslims upon learning the significance of giving and replying to salām (greetings of peace amongst Muslims).

ʿAbdullāh b. ʿUmar (raḍiy Allāhu ʿanhu) used to go to the market in the morning, and he did not pass by anybody without saying salām to him. One day he was asked, “What do you do in the market, when you do not sell anything, or ask about prices, or haggle, or join any gatherings?” He said, “We go there in the morning for the purpose of saying salām to whoever we meet.”[2]

It is evident here that the Saḥāba (raḍiy Allāhu ʿanhum) would venture out with the sole purpose of performing good deeds, making trips about the same locales simply to accumulate the reward of giving salām. This proactivity in implementing and making integral the Dīn in our lives was mastered by the early generations. People who perform righteous deeds in both the public and private domains solely for the sake of pleasing Allāh (subḥānahu wa taʿālā); solely to attain closeness to Him – it is they who will be ‘nearest to Allāh’ and ranked amongst the Sābiqūn (the foremost) on the Day of Judgement.

Our primary concern should be our final abode and our daily preoccupations how to ensure it be Paradise. And yet, as the āyāt in the Qur’ān illustrate, amongst the foremost, Muslims from the later generations will only number a few. What does it mean, then, to be ‘foremost’ and how are Muslims able to achieve this valued position that was so widely attained by our predecessors and so neglected by us today?

Ultimately, and quite obviously, those who are foremost are those who race for the first position; those who race to achieve their goals; those whose thirst is apparent in their dedication and earnestness, their impatient and passionate drive and their determination to succeed. It brings to mind the account of Habīb b. Murā al-Najjār whose beloved action was preserved in the Qur’ān,

And there came, from the outskirts of the city, a man, running, saying “Oh my People, follow the Messengers.”[3]

Allāh (subḥānahu wa taʿālā) illustrates a compelling and vivid scene as Habīb’s proactivity and sincere desperation drives him to run from the outermost limits of his city, where sources say he had been exiled, and, against the tide, attest to righteousness.[4] What is astonishing, and often overlooked, is that Allāh (subḥānahu wa taʿālā) makes particular mention of the fact that this man ran across the city. To me, at least, this man will be counted amongst the foremost, inshāAllāh, for his attitude was one of exceptional proactivity.[5]

Unfortunately, however, today such proactivity and determination seems almost to be reserved for everyone but Muslims. As if an inertia has set in and doing the Farāidh (compulsory deeds in Islām), if even that, is sufficient for us. Look about us and we see the world turning to rot, and the only ones ‘stepping up their game’ are the puppeteers, the elite, as it were, who stand to profit from war and suffering.[6] In fact, in a recent broadcast, this proactivity was lauded;

“Russian military is stepping up its assault on the main source of funding from Islamic State. Dozens of ISIL held oil facilities, as well as more than 1,000 trucks loaded with crude, were bombed in the last five days or so”.[7]

“Government forces are fighting to push…”, “Paris promised a merciless response”, “Russia and France agree to join forces in fight […]” and other such language demonstrate just how driven they are. How depressing; that such an attitude be reserved for war. Why are we not doing more ourselves to counterbalance all the gore in the world with humanitarianism?

Allāh (subḥānahu wa taʿālā) instructs us on the imperativeness of helping others,

Those who give, out of their own possessions, by night and by day, in private and in public, will have their reward with their Lord; no fear for them, nor will they grieve.[8]

In another āyah, Allāh (subḥānahu wa taʿālā) mentions good-treatment of others in the same breath as the core belief in Islām, Tawḥīd (the oneness of Allāh):

“Serve God, and join not any partners with Him; and do good – to parents, kinsfolk, orphans, those in need, neighbours who are near, neighbours who are strangers, and the companion by your side, the way-farer (ye meet), and what your right hands possess: for God loveth not the arrogant, the vainglorious”[9]

This notion is further perpetuated in a ḥadīth in which the Prophet (sall Allāhu ʿalayhi wa sallam) is reported to have said,

“That man is not from me who sleeps contentedly while his neighbour sleeps hungry.”

– The Russo-Circassian War (1763-1864), which saw the ethnic cleansing of hundreds upon thousands of Circassians, resulted in their subsequent expulsion. The Circassians sought refuge in Syria in 1860, with their immigration into current Syrian territories continuing until the beginning of the 1920s.[10]

– Over half a million Armenians fleeing the mass genocide of their people during the First World War were given sanctuary in Syria in 1914.[11]

– In 1948 and then again in 1967, Syrians opened their doors to thousands of Palestinian refugees terrorised by the illegal occupation and torture in their lands.[12]

– In 1990, following an Iraqi invasion, Kuwaiti refugees were sheltered in Syria.[13]

– Syria has seen ‘a massive migratory movement from Iraq’ as it is the ‘primary destination of refugees’.[14] Since 2003, Syrians offered Iraqi refugees ‘care and assistance in spite of the limited nature of [their] material resources’.[15]

With the Syrian people, and I emphasise here: the average, every day, people, embodying such traits of hospitality and the true Islamic stance on offering safety and security to those in need, it is no wonder that in Prophetic tradition Syria is hailed as a blessed land. Zaid b. Thābit reported,

“When we were with the Prophet writing down the Qur’ān on animal skins he said, “Blessed be Al-Shām”. They said “Messenger of Allāh, why is it blessed?” He replied, “Because the angels of Allāh spread their wings over it.”[16]

They, who have given homes, food, shelter and hope, are now in need. Millions of Syrians are frantically making attempts to flee their homes. Innocent civilians, children, women, men, families and homes – destroyed; lives – destroyed.[17] Hope – is there any?

On the authority of Abū Huraira (raḍiy Allāhu ʿanhu) it is stated that the Prophet (sall Allāhu ʿalayhi wa sallam) said,

“The similitude of believers in regard to mutual love, affection, fellow-feeling is that of one body; when any limb of it aches, the whole body aches, because of sleeplessness and fever.”[19]

Are we behaving as such? Are we aching to help? Are we competing with one another in relieving their situation? It is reported that ʿUmar (raḍiy Allāhu ʿanhu) would go to serve an elderly, blind lady only to find that someone would cater to her needs before he arrived despite his trying to reach her earlier. In order to find out who it was, he waited, only to discover it was Abū Bakr (raḍiy Allāhu ʿanhu), who was the Khalīfa at the time. At this, ʿUmar (raḍiy Allāhu ʿanhu) exclaimed “I swear, it could only be you!”

Are we racing to do good; to take initiatives; to make waves; to compel our leaders and our representatives to action? Are we amongst the Sābiqūn when we have millions of opportunities, quite literally, knocking at our door? This is the crux of the matter. Our motivation to do any good should always be for the ultimate goal of gaining closeness to Allāh (subḥānahu wa taʿālā). Our race to be the foremost to facilitate aid and sanctuary for Syrian immigrants should be for the sake of Allāh (subḥānahu wa taʿālā) so we may be the foremost in the Hereafter. Allāh (subḥānahu wa taʿālā) describes the successful ones on the Day of Resurrection as being those who ‘give food in spite of their love for it to the needy, the orphan, and the captive, [saying] “We feed you only for the countenance of Allāh. We desire neither reward from you nor gratitude.”[20]

We should seek no recognition or aggrandisement in this life; neither are those we help under any obligation to thank us nor do they bear to us a debt. It is, in fact, their right over us. Those fleeing their lands do so out of necessity and, were it not for the gratuitous bombs raining down upon them, they would have no interest in doing so. The Syrian people dream of returning to their homes and rebuilding their nation.[21] Theirs is a blessed land. After all, above them are spread the wings of angels, and it is only the corruption of others that has caused them to leave. The role we play in this predicament is entirely our choice. How we behave is our choice, and our station in the Hereafter depends on our own actions. Run to goodness. Be the foremost. Relieve their distress; alleviate their concern; help our neighbours; so we may be successful.

“When a member of your community is in need, danger or illness or calamity has fallen on him, it is your duty as a Muslim to reach out and offer them help (regardless of the neighbor’s (sic) faith or background). To fail to do this is to fail in our duty to our neighbors (sic), and is to leave a gaping hole in the Ummah.”[22]

[22] “Top 11 rights neighbors have on you – Understanding a Muslim’s duty to our neighbors” http://www.zakat.org/blog/top-11-rights-neighbors-have-on-you/