The Brutal Truth About The Assassination of Jo Cox 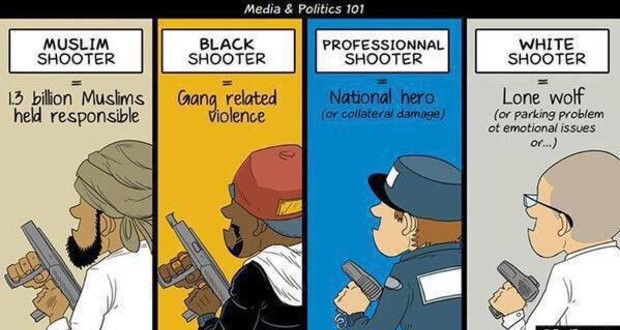 The shocking and brutal murder of Helen Joanne Cox, a Labour MP, by a neo-Nazi led to an outpouring of grief among the general population last week. People of all faiths and backgrounds paid tribute to the Labour backbencher as she was described by many as a devoted, kind, perfect and utterly amazing mother and politician,[1] who championed the rights of the less fortunate in our society, including immigrants, refugees and the oppressed in locations as far as Palestine and Syria.[2]

However, the feelings of sorrow quickly turned to anger and frustration among a number of different communities across the country. This was by and large due to the manner in which Ms Cox’s murder was portrayed in the media, with many incensed that the assassination of a well-known pro-EU and pro-immigration MP was not being referred to as a terrorist attack by the mass media, despite clear evidence from a number of sources supporting this claim.[3]

A terrorist attack is commonly defined as an “unofficial or unauthorised use of violence and intimidation in the pursuit of a political aim”.[4] Scrutinising the actions of Ms Cox’s killer, Thomas Mair, 52, leading up to, during and after the murder, it becomes clear that the underlying reason she was murdered was for the perpetrator to put his far-right political beliefs into practice.

Firstly, Mr Mair was allegedly heard shouting “Britain First” during the attack, a reference to an ultra-nationalist and anti-Muslim political party, known to despise the pro-immigration and pro-EU work that Ms Cox was engaged in.[5] Secondly, during the murder trial, when asked to give his name in court, Mr Mair shouted “death to traitors, freedom for Britain”;[6] another sign that the perpetrator’s motivation was to implement his far-right political ambitions. Thirdly, it was revealed by West Yorkshire Police that, during his arrest, Mr Mair referred to himself as a political activist,[7] and in the hours following his arrest far-right racist memorabilia urging people to leave the EU was found scattered around his home.[8]

Despite this information having been readily available to all media outlets, not only in Britain but also across the world, the right-wing media began “humanising” her murderer by referring to him as a “loner” and a “quiet”,[9][10] “helpful” and “polite” man with “mental health issues”.[11][12][13] It appeared as if there was a clear refusal on their part to acknowledge the attack as a terror related incident and the first terrorist attack to have taken place in Britain in just under a decade.

Therefore, it begs the questions as to why there was such reluctance among many media outlets to label Mr Mair as a terrorist? Only last week, over fifty people were brutally murdered in an Orlando nightclub by an individual who, just like Mr Mair, was described as a “quiet”, “polite”, “loner”; a “positive person”, with “mental health issues”,[14] yet no time was wasted in declaring him a terrorist.

This is not the first time the right-wing media have been found guilty of double standards in their coverage of crimes committed by people of different races and faiths. Such media outlets are guilty of gross levels of irresponsible reporting to the extent that it is now widely believed that a racial and religious criterion is the definitive standard used to determine who is labeled as a terrorist. In other words, if someone who happens to look like a Muslim commits a violent crime then it must surely be attributed to a destructive religious ideology and must automatically be a terrorist attack. Whereas, a violent crime committed by a White individual is routinely attributed to more reasonable explanations, such as mental health issues. Such a lazy and pernicious notion has been peddled by neoconservatives and Islamophobes now for decades and continues to be consumed by the majority who are frequently spoon-fed the ridiculous notion that not all Muslims are terrorists, but certainly all terrorists are Muslims, despite factual evidence showing that between 94% to 98% of terrorist incidents in Europe and America are committed by non-Muslims.[15][16]

Double standards have also been exemplified by the clear disparity in which Muslim and White non-Muslim criminals are treated by the right-wing media. One can draw parallels with the infamous case of Mohammad Emwazi and the present case of Thomas Mair. In February 2015 research director of CAGE, Asim Qureshi, retrospectively described Mr Emwazi as a “beautiful young man”; a reference to him before he became radicalised and turned into a brutal killer. Such a description about Mr Emwazi was met with widespread condemnation from media outlets across Britain, as well as politicians, who repeated the accusation that Mr Qureshi and CAGE were terrorist sympathisers, with Prime Minister David Cameron joining the public witch-hunt by labeling the organisation as consisting of a group of “extremists”.[17] Similarly, in recent days the Daily Mail and The Telegraph have repeated claims that Mr Mair, an individual who brutally assassinated a Labour MP, was a “helpful, polite and gentle man”. However, on this occasion, despite the gravity of the crime, which was essentially an attack on British democracy, no words of condemnation were used against the Daily Mail or The Telegraph and neither were they accused of sympathising with a terrorist.

Mr Mair’s links to far-right extremists has also largely gone unnoticed in the media. Last week, it was revealed that Mr Mair was a long time supporter of the American neo-Nazi National Alliance.[18] Referring back to his alleged reference to Britain First and his statement in court where he declared “death to traitors, freedom for Britain”, it provides a disturbing insight into his exposure to far-right extremist ideology. Mr Mair’s statement about “death to traitors” was identical to a speech given by Britain First’s deputy leader, Jayda Fransen, in September 2015 when she announced the Party’s leader, Paul Golding, would be campaigning to become the Mayor of London in 2016. During the speech she made a reference to the party’s “pro-EU, Islamist-loving opponents” for “ruining our country” and disturbingly went on to say

“they think they can get away with ruining our country, turning us into a Third World country, giving away our homes, jobs and heritage, but they will face the wrath of the Britain First movement, make no mistake about it! We will not rest until every traitor is punished for their crimes against our country. And by punished, I mean good old fashioned British justice at the end of a rope.”[19]

Firstly, it appears Ms Jansen’s words had an enormous impact on Mr Mair’s outlook as he not only repeated her claims in court but it appears he also enforced her words by killing Ms Cox; an individual Britain First would have had no hesitation in referring to as a “traitor” for her pro-EU and pro-immigration stance. Secondly, despite the far-right racist group denying any connection to Mr Mair, pictures of him attending an anti-Islam Britain First rally have been circulating on social media, which the organisation has attempted to conceal.[20] The connections between Britain First and Mr Mair are further strengthened by eyewitness testimony, with two eyewitnesses having heard Mr Mair say “Britain First” during the shocking murder.

Nevertheless, to place the entire blame of the brutal assassination on far-right extremism ignores the real mechanisms that have helped perpetuate and fuel the poison of far right racism and anti-Muslim bigotry in mainstream British society. Those who ought to be held equally accountable for Ms Cox’s murder are the journalists and news editors from right-wing newspapers, as well as neoconservative politicians and other racists who have played a pivotal role in indoctrinating the masses into believing that ethnic and religious minority groups in the UK, like Muslims, are their enemies.

While fringe groups like Britain First and the EDL should be despised for the bigoted views they espouse to their followers, they are the scapegoats in Ms Cox’s murder and a manifestation of the propaganda war that has existed for decades and continues to exist with great verve in Britain against Muslims, refugees and immigrants.

Bias media reporting by right-wing news outlets and the use of politicised rhetoric by some politicians to reinforce Islamophobia provides the likes of Thomas Mair and many like him with the ammunition and encouragement to hate Muslims and immigrants in Britain, through the repetition of lies and the disproportionate exaggeration of their faults. As a result, this has led to attacks against them and anyone like Ms Cox who challenged the establishment’s and right-wing media’s negative portrayal of them in the UK.[21]