Time to Devour the ‘Hero’ they created from a Minion 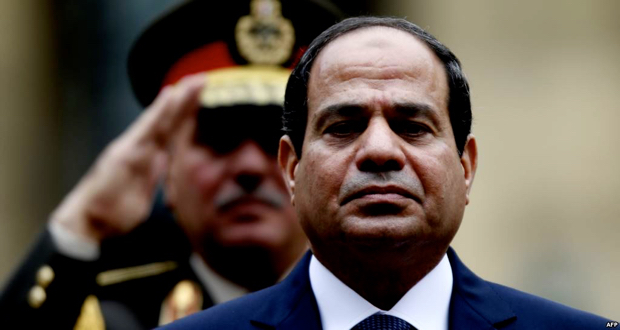 In an Islam21c exclusive, a member of President Morsi’s Government, and secretary of Foreign Affairs for the Muslim Brotherhood’s Freedom and Justice Party, Mohamed Soudan gives an inside look into the psychological siege that is constricting Sisi.

Time to Devour the ‘Hero’ they created from a Minion

Egypt’s military overthrew the nation’s first president-elect, Mohammad Morsi, rendering void the entire 25th of January revolution, only to replace him with the perfect candidate; one of the first ‘Officers’ to enter the cowshed of the ‘Military Council’.

The Generals gave their backing to Sisi with two things in mind: The first is, if the coup were to fail, he can be disposed of easily (‘disposable’) and a new strategy could be formulated. The second is, had the coup succeeded then he could be allowed to stay in office for a short while to carry out and be at the forefront of the ugly brutality that would be needed to put a leash back on the Egyptian people. After this, he could be disposed of in a number of ways. Without doubt, Sisi was one of the weakest members of the Military Council,[1] but in spite of this, events quickly escalated beyond its control and the council became unable to impose its will as it had hoped, especially considering the defiance the legally elected president showed in the face of their injustices. This in turn made the general population of Egypt even more defiant in the face of fierce pressure, persecution and crackdown and the ridiculous laws emanating from the ‘judiciary’ against them that have turned Egypt into a laughing stock.

Abdel Fattah Al-Sisi sensed that the rest of the Military Council was looking for a way to get rid of him. He thus began allying himself with the Israeli Government, carrying out atrocities in the Sinai desert,[2] and intensifying the siege on Gaza,[3] especially during Ramaḍān of the year 2014,[4] throughout Israel’s assault on the strip. He then declared war on the Bedouin tribes in the Sinai peninsula in order to create a no-go area between it and Gaza,[5] thereby appeasing Israel, whilst launching a propaganda campaign against Hamas in order to paint them as an enemy of not only the Egyptian people, but the Arab Community as a whole, and possibly the entire world.[6] He even went so far as to assign the Muslims of the entire world who espouse orthodox principles as terrorists that wish to destroy humanity,[7] caring to side vehemently with Egyptian Christians, carrying out their wishes at the expense of the majority Muslim population. His intent was to prove to the rest of the Military Council his adequacy, and to transform the thought of removing him into fantasy. What more of an effective way than to engage in a bloodthirsty crackdown on the Muslim Brotherhood and all opposition, killing thousands of innocents so far?[8]

In his desperate attempt at creating for himself some form of ‘legality’, Sisi tried to get close to some of Mubarak’s men, to earn their support against the legitimate president, which they provided.[9] But initially Sisi was incapable of completely freeing Mubarak, his sons and all of the old regime’s major figures. Mubarak’s supporters thus abandoned Sisi in the ‘Presidential Elections’ that he staged, and was shown as a candidate with weak political backing, with an incredibly abysmal attendance at many polling stations.[10] He was thus required to renegotiate his position with them and consented to the release of Mubarak and his regime’s major heads. But when Sisi felt that Mubarak and his cronies would regain the strength they had amassed prior to the 25th of January revolution, and to avoid displaying that he only carried out the coup to reinstate Mubarak and his sons, a ‘retrial’ followed and he clamped down on Mubarak’s men in order to hide them from the political landscape completely.[11]

Their release did not come without a cost. In fact, this freedom was in exchange for billions, I am almost certain of this. During Morsi’s presidency, a businessman, known for his close trade ties with Israel, offered President Morsi, through myself, 100 billion Egyptian pounds (around £10 billion) for the release of Mubarak and his men. Morsi completely refused and left the decision to the judiciary, assuming that it would provide a just ruling and restore the rights of a people subjugated by oppressors for three successive decades.

Ahead for the Generals in the Military Council is to remove this now burnt-out tool they used in the form of Abdel Fattah Al-Sisi. Sadly for them, Sisi’s relentless aligning with Israel, to the point that Ehud Barak recently roamed the globe to promote his merits and to request that the world stands by his side, has complicated matters. Recently, the National Security Strategies (INSS), one of Israel’s leading think tanks, emphasised the need to back Sisi on all fronts “to serve Israel’s security interests”[12] as well as Israel’s lobby in the US (AIPAC)[13] and the European Union. This alliance has become so close, that the Israeli army recently bolstered its presence in Sinai for the purpose of ‘fighting terrorism’, in response for it coming out of the Egyptian Military’s control, amidst an ‘upswing in ties’ since Sisi came to power.[14]

The current dilemma for Sisi is posed by the Generals of the Military Council making plans to remove him whilst the Israeli government fervently provides its backing. On top of this, he is still contending the revolutionary sentiment within Egypt that has refused to die away since the 2013 coup. Then, to add insult to injury, Sisi is faced with a resolute President Morsi, still standing firm despite all of the pressure from the US administration and European Governments on him to stand down.

Sisi seems to sense that his days are limited and in his attempt to rid himself of the headache of having a legitimate President, Mohammad Morsi behind bars, Sisi is doing all he can to accelerate the ‘legal process’ and have Morsi executed as soon as possible.[15] It is as if with the execution of Morsi and the senior figures of the Muslim Brotherhood, including its General Guide Mohammad Badie and demonstrators, that the country will settle down and accept Sisi as the incumbent President. Looking no further than the 2011 revolutions throughout the Arab world, believing that the execution of revolutionary figures will kill a revolution reveals a degree of political stupidity of the highest order.

The psychological siege on Sisi is constricting. His fear of travelling to South Africa and his reluctance to visit the UK indicate how much he dreads the repercussions of his crimes. Amidst all of this, the Egyptian Media’s propaganda machine continues to promote him as the saviour of Egypt from the Muslim Brotherhood, terrorism, civil war and the ‘factional divides’ between the Egyptian people. It conveniently overlooks the tribal conflicts that have raged after the coupe, the economic catastrophe that has resulted, a crippling public debt of around 2.2 trillion Egyptian Pounds (£220 billion)[16] and the external debt exceeding 45 billion Dollars.[17] The rate of unemployment has soared to 25%,[18] and 444 NGOs allegedly funded or owned by members of the Muslim Brotherhood have been completely shut down.[19]

The man and his clique are simply jumping from one failure to another, without anyone, neither from the military, police or general people willing to stand in his way or utter a single word against him as a result of the brutal reputation he has forged for himself. Egypt has become the ultimate militarised, police state.

Now I ask, is it not time that the Generals of the Military Council devour the hero they created from a minion before he steers Egypt further into the abyss? After all, they are all passengers on-board a ship that he is sinking. They oversaw the creation of this Sisi regime and are the ones responsible for how it is steered. These generals will not be beaten in finding a suitable scenario to get rid of him but it seems that the backing of the Zionist regime, the US administration and some Gulf countries have provided him with an unexpected backbone, all the more adamant to devour the generals of the military council before they have a chance to devour him. A solution to this quagmire will most likely stem from the Whitehouse.

In conclusion, will the international community stand completely powerless until Sisi and his regime drive Egypt into no return? How many more thousands must be murdered, injured and tortured in prisons, how far does the Egyptian economy need to tumble, how much does unemployment need to rise by and to what extent do Human Rights and proper judicial process need to be breached before a solution is sought? Is it enough for us to wait for a solution to parachute onto Egypt from outside or are the internal and external revolutionary movements strong enough to break this despotic regime? We are deafened by the UN and the international community’s silence, and antipathy towards all the heinous crimes committed by Sisi and his regime.