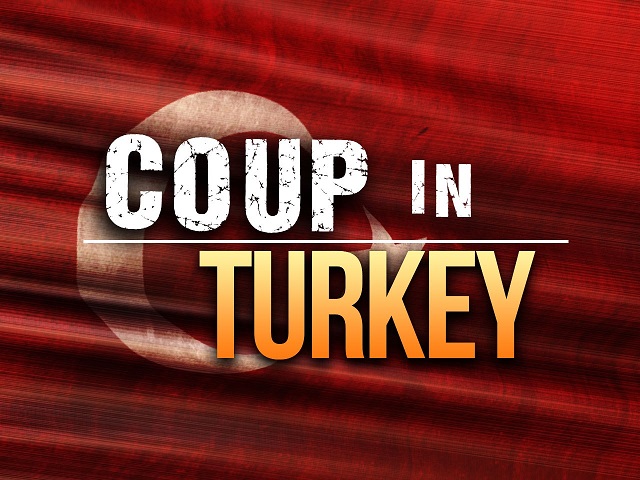 ”Good evening. Today’s development has developed by a small minority within the Turkish Armed Forces (TAF) and it is a movement that is being used by the parallel forces. I firmly believe that these people will receive the punishment they deserve with a response from all of our combined (Turkish/society) strength. They are using resources that have been given to them by our people in the form of tanks, canons, airplanes, helicopters, and they are using them on our people, which will have an extremely heavy price that they will have to pay. We as the government whether it be the Prime Minister or myself as the president will take the necessary steps in a confident and strong manner in this situation. We cannot say that the consequence to these actions can be any different (from what I have mentioned), and we also cannot leave the arena open to them. I firmly believe that we will erase the occupation that they have initiated and I want to inform everyone that we will go against this in full force and nobody’s strength will be enough to stop our nation. I also want to call upon our people, I invite you to our airports and let us see what these minority traitors will do against our people. I have never seen a higher power than the people of a nation.”

Message from Our Middle East Editor

A military coup, if true, will reveal the vile face and duplicity of secular thought; one so rotten, disgusting and repugnant that it forces itself down the throats of people, either through coups, or through deceit and lies. Will the world accept that a coup in Egypt is followed by one in Turkey? Let ‘democracy’ define for itself the way it wants to be played, then blame no one but itself. By Allah, Islam is here to stay, and will reach every corner of the earth.

In my life I have never seen so much commotion following an international event as I saw in the Masjid today at news of the attempted coup in Turkey. Under no contemporary leadership has Islam become more rooted in the hearts and minds, and under none have the many nations of the world benefited. Every sincere Muslim feels the tribulation Turkey is going through and every Muslim stands in solidarity with its legitimate and successful leadership, authorised by over 22 million voters.

With them is Allah, the Messenger and the righteous believers. And by Allah, those gloating are but hypocrites or enemies of Allah and His Messenger.

Make dua tonight for Erdogan as the sahaabah did for Najashi when his authority came under attack (full Hadith below).

May Allah preserve Erdogan as the leader of Turkey. May Allah protect him and Turkey from the plots of His enemies as it has been decades since the Muslim world has had a leader with the principles, pragmatism, vision and leadership as this man has. Hence, the collective efforts to overthrow him.

“She said: By Allah! We were upon this (peace and security) until a person from the Ethiopians challenged his kingdom. She said: By Allah! I did not see us become upset more severely than us becoming upset on this, fearing that this person might defeat al-Najashi, so he may come to power not acknowledging our rights as al-Najashi would. She said: al-Najashi went ahead to engage with him in a battle while between them was the Nile River. She said: the companions of the Prophet SAW said: Who from us can go out to witness the battle and then tell us the news? She said: al-Zubair ibn al-‘Awam said: I will, to which they said: Then you surely will. He was the youngest one of them. She said: They blew into a water skin, and he placed it on his chest. He then swam on it towards the place in the Nile River where the battle was taking place, until he reached it. She said: We then made Dua to Allah Ta’ala for al-Najashi that He gives him Dhuhoor upon his enemy, and al-Tamkeen (authority) in his land.”

Why am I delighted upon Erdogan’s victory?

erdogen sufferingoftheummah2016 TURKEY
Share. Facebook Twitter LinkedIn Email Telegram WhatsApp
Previous Article“Not the Words of a Poet, Little do you believe”
Next Article The Muslims of Turkey: An Inspiration to All