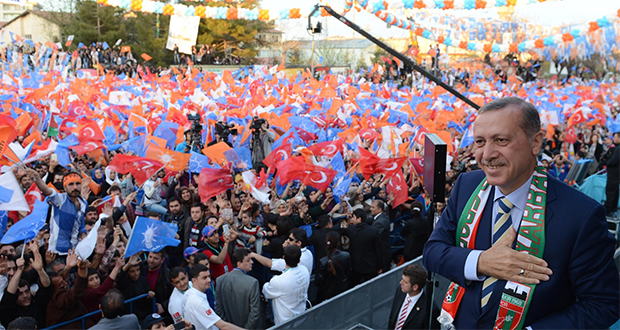 Of the few places in the world that celebrate their own leaders, Turkey is one of them. In any corner of Istanbul, the general sentiment is contentment at the remarkable achievements of the leading party, rightly in power, reelected on the 7th of June 2015 for a fourth term, having never lost since its inception, to be the largest single party in Turkey’s 25th parliament, and from it will remain the Prime Minister. We dare say, and as so rarely we do, today is a happy day for politics. Rather, we as Muslims are ecstatic at the win of Turkey’s Justice and Development Party (AK Party) with a 258 seats, supported by 18.7 million meticulous voters. Voters who saw through the empty remarks of imprudent media outlets’ campaigning against them, and held that the best should govern and the evil be thwarted.

Although the AK party did not achieve the landslide victory they were ambitiously aiming for, their shortfall came at the expense of the party representing the many internal and cross-border problems for Turkey in the past – the pro-Kurdish People’s Democratic party (HDP). This goes a long way in showing the sincerity of the current government and their readiness to make sacrifices, clearly not seeking to hoard government.

Despite this, we, with our Turkish family, thank Allāh in celebration for this victory. The entire Muslim nation has experienced the benefits and enjoyed the shining light emanating from Turkey since 2001. We saw how it leaped to the help of the stranded Rohingya Muslims: Erdogan’s wife along with the current Prime Minister and other prominent politicians were on the ground distributing aid packages,[1] and offering to shelter them had Indonesia not done so,[2] when the Australian Abbott government preferred that they stay doomed in Burma.[3] We saw how it sided with Gaza, expelling its Israeli ambassador, cutting military ties,[4] and forcing Israel into apology.[5] We saw how Erdogan defied the western status-quo, siding with Egypt’s legitimate President Mohammad Morsi, defying al Sisi’s legitimacy and rallying the four-finger ‘Rabi’ah’ massacre sign in his presidential campaigns.[6] We saw how Erdogan, his family and senior cabinet members flew to Somalia through its ‘no-go zone’ in Ramaḍān 2011, carrying building projects worth $500m, to develop hospitals, mosques, schools and businesses, resuscitating the nation of “Muslim brothers and Sisters” ‘from near death’.[7]

We saw how the AK Party lifted the Hijāb ban in 2014,[8] after decades of crippling secularism imposed on the Turkish people; the building of 17,000 new mosques since 2002;[9] (as opposed to ‘closure orders’) and how it equated religious and secular degrees by supporting the Imām Hatip (clergy) Schools,[10]; how it sought the reinforcement of familial values; the revitalization of conservative values; separating male and female dormitories and private student housing, as per Islamic custom.[11] Erdogan now vows to restore teaching the Arabic language in high schools, to resurrect ‘Ottoman’ legacy, and to repair Turkey’s ‘Jugular Vein’ that was cut but the ultra-secularists, “no matter what they say”.[12] The AK Party has further clamped down on alcoholism, banning its late night sale, legislating that it is not sold within 100 metres of mosques and schools, while enforcing firmer penalties on drink-drivers and that the harm of alcohol is clearly stated on all bottles (like tobacco in the UK).[13]

“Ayran (lassi) is the natural drink of the Turks.” (President Erdogan)

Anyone who has been to Turkey can testify to its beauty, the resounding, melodious Adhān, the soothing Qur’anic recitation of mosque Imāms, the charitable nature of Turks and the spotless roads and lush green parks. These are only a few of the AK Party’s great achievements, rather hallmarks in Turkish history that are on par bringing it back to the pivotal Islamic nation, the empire that it once was, something every Muslim in the 21st century should celebrate and be enthused by.

“This religion has a guardian. And this guardian will protect this religion till the end.” (President Erdogan)

Elected into power in 2002, the party has transformed Turkey from a debt-ridden, ruined country, shattered by valueless secularism and rooted corruption to one of the strongest countries in the world. In only 10 years, from 2002 to 2012, Turkish exports hit $152 billion, marking a ten-fold increase.[14] Turkey’s overwhelming annual inflation rate of up to 100% was watered down to single figures, while its GDP has risen by over 45%. President Erdogan and the AK Party are now resolute on bringing the economy into the top 10 in the world by 2023,[15] having completely erased its 52 –year old debt to the IMF in 2013. The Turkish electorate continues to find no competition in the ballot but to re-elect the AK Party for a fourth time, after three successive victories; 2002, 2007 and 2011.

Born in 1954, Erdogan, the founder of the AK party is the son of a coastguard in the city of Rize. During his early life he sold lemonade and sesame buns for some pocket money, being a member of a poor family. Erdogan attended an Islamic school, before studying management at Istanbul’s Marmara University. Here he met Turkey’s first Islamist Prime Minister, Necmettin Erbakan and began his fascinating political career.[16] In 1994, he became the mayor of Istanbul, converting the city from a slum into one of the world’s key destinations for tourism, and a beauty of a city for its local residents. His commitment to Islām and its values were relentless and in 1998 he was detained for four months after reciting on a public stage:

“The mosques are our barracks, the domes our helmets, the minarets our bayonets and the faithful our soldiers.”

His release and rise in positions of leadership, from Prime Minister in 2003-2014 to President, the first to be directly elected in Turkey’s history with 52% of the electorate voting for him.[17] This landmark victory proves that secularism is a foreign phenomenon for our Islamic societies. Despite the fact that Turkey was once the mother and heartland of secularism in the Muslim world, it can so easily turn to Islām once the socio-economic pressure, applied by the secularists is lifted.

Muslims are ecstatic at the victory the AK Party has achieved. It marks a continuation to the unprecedented support Turkey has provided for the Syrian revolution. Many analysts confirm that had the authorities in Turkey acted against the interests of the Syrian people and their revolution, the tyrant regime in Syria would have regained power and wiped out the entire struggle. Turkey’s borders with Syria, particularly its southern border to Aleppo are the major or even the only source for ‘breath’ for the Syrian Islamic revolution. Moreover, none can deny that it is Erdogan’s AK Party government, amongst all governments in the world that is ardently supporting Gaza, and bitterly attacking Israel within what international politics allow.

There is no doubt that despite the atrocities the Ummah is going through, Allāh is showing us rays of light, and glimmers of hope to keep us optimistic and motivated and to give us the ability to bear the responsibilities He commanded us to bear.

“Allāh has promised those among you who believe, and do righteous good deeds, that He will certainly grant them succession to (the present rulers) in the earth, as He granted it to those before them, and that He will grant them the authority to practise their religion, that which He has chosen for them (i.e. Islām). And He will surely give them in exchange a safe security after their fear (provided) they (believers) worship Me and do not associate anything (in worship) with Me. But whoever disbelieved after this, they are the Fāsiqūn (rebellious, disobedient to Allāh).”[18]

Moreover, Allāh, in His ultimate wisdom often chooses that Muslims win in the way He wants, even if this may differ from their hopes or expectations. Such a decree teaches them many lessons. Among these is that they are taught to live a challenge as Paradise is not granted without struggle. They are taught to push harder and harder towards achieving constant improvement, away from relaxing or becoming complacent. It also reveals that the Turkish electorate is not of a single understanding, or that they do not necessarily appreciate fully what the AK Party has done for Turkey, and they are willing to place their nationalistic interests or personal leanings and desires above the collective good of the Muslim world. Nonetheless, the collective majority will prefer Islām, as has been demonstrated.

Finally, I must dedicate the end of this article to the neo-cons and the haters of the AK Party (east and west), who have managed to show as much staunchness in reaching this part as they did milk every avenue to disrepute the AK Party and Erdogan for their entrenched hatred of political Islām. The Turks have spoken loudly, and it is time to show respect for their choice and rise above this bigotry. Be it an outright majority, constitutional reform or whatever else, like Erdogan said, really if you think about it, “Who are you?”[19] to dictate to the Turkish people who by or how they are administered? With almost 18 million votes, the AK Party and the President are more incumbent and representing than most western governments. It is time to put aside the sensationalist archives, falsified reports and allegations of ‘corruption’, ‘autocracy’ (funnily enough through democratic means). It is time to focus on the mess caused by ‘developed’ systems in Syria and Iraq, corporate tax evasion, ‘parliamentary’ expenses, the abolishment of the Human Rights Act, the one in six UK children in poverty,[20] and the real autocrat in Egypt enjoying the support of so and so. Until then, the AK Party are here for at least the next five years, so as they say: “eat your heart out”, and to all objective, impartial observers: congratulations, Mabrūk and a prostration of thanks to Allāh is long overdue.