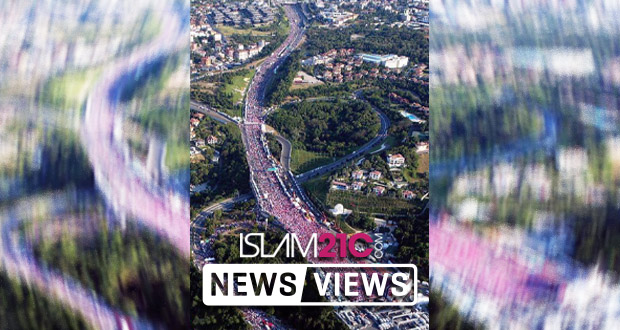 Since the 15th of July 2016 military coup attempt in Turkey, mainstream media has tried relentlessly to make us believe that support for Turkey’s ruling party had dwindled following its nationwide crackdown on those involved.

On the 15th of July 2017, hundreds of thousands of Turks from all over Turkey and from every political persuasion gathered in nationwide rallies marking one year since the failed coup, under a motto of National Unity. Participants headed for the ‘July 15 Martyrs Bridge’ previously named the ‘Bosporus Bridge’ prior to the coup attempt. The bridge was one of the many sites on which long night confrontations took place between soldiers and ordinary civilians who had descended the streets to counter the coup attempt.

Also read: The Muslims of Turkey: an Inspiration to All by Sh Dr Haitham al-Haddad

On the night, around 250 people were killed and over 2000 were wounded having confronted fighter jets, attack helicopters and heavy weaponry.[1] Were it to have succeeded, this would have been Turkey’s fourth military coup, except this time, against the most successful and repeatedly elected government in its modern history. The unprecedented civilian response, instigated by a Facetime message that President Recep Tayyip Erdoğan sent through an iPhone, marked a distinct turning point in a country once prone to military coups.

Mentioning the sacrifices of Turkey’s populace, the president, who himself narrowly escaped a commando assault on his residence, placed a remembrance plaque on the bridge and addressed the crowds between the two sides of Istanbul saying:

“On the 15th of July, the Turkish nation proved itself not reluctant to sacrifice souls in order to defend its sanctities,” before thanking “every member of the nation who defended their freedom, their Adhān (call to prayer) and their state.”  Adding:

“The Gulen Movement is not solely responsible… and the coup attempt on the night of the 15th was not the first and possibly not the last,” indicating his readiness to approve a bill that reintroduces the death penalty if parliament votes in its favour.

“On the night of the 15th, we sacrificed 250 martyrs, but we gained the future of our country.”

“That day the traitors used heavy weapons against the nation, but the people who came, just like today, only had their flags and their Imān (faith)… do you know what God has promised the martyrs? For those who fight in the way of God, or in the way of their nation, he has promised them paradise.”

Prime Minister Ben Ali Yildrim, former Turkish President Abdullah Gul and former Prime Minister Tansu Ciller along with other members of the Turkish Government participated in the event. On that Saturday, Ben Ali Tildrim addressed parliament saying: “a year has passed since the massacre that occurred on a dark night”, praising “martyrs who sacrifices their lives for the sake of the country.” Estimates put the number of participants in Istanbul alone, stretched over the bridge between 500-600 thousand whilst similar rallies were held in other major cities.

The event was introduced with recitation of the noble Qur’ān and included an emotional Duʿā (supplication) by the Mufti of Istanbul, Sheikh Hassan Kamel Yilmaz. It also included a broadcast of a documentary about the momentous event. At the end of the event, Duʿā and recitations could be heard from the minarets of Turkey.

Exactly a year ago, Turkish citizens took to the streets in their thousands, particularly in Istanbul and Turkey’s capital Ankara, where they came together to hamper some soldiers from overrunning the Parliament in Ankara, Istanbul’s International Airport and Security Directorates across a number of Turkish cities. This forced those members of the military surrounding the facilities to retreat in an extraordinary spectacle of unity, sacrifice, and resilience, finally failing the coup attempt.

Since then, around 170,000 have faced legal proceedings related to the coup attempt and 50,500 have been arrested, along with 169 army generals, 8800 police department members, governors, members of the judiciary and journalists. Many have been found legally complicit in the coup attempt or found to have associations with “terrorist organisations” like the PKK, PYD and YPD.

Muslims across the world have marvelled over how a scheme of this size was scuppered, returning the favour to Allah, then to the resolute Turks, divinely rewarded for years of service to the people of Syria, Burma, Somalia and Palestine to name but a few.