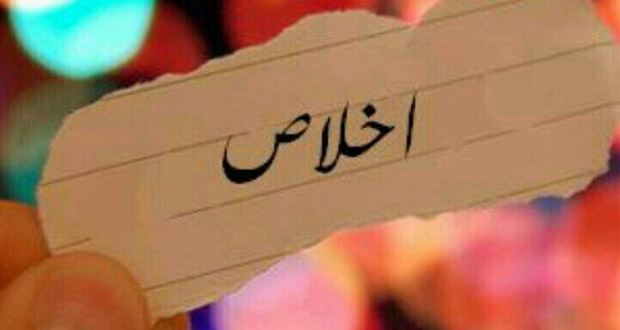 During our life we go through different phases; we go to school, then we go to university, then we graduate and get jobs in which we get decently paid. What necessitates the accomplishment of them all is hard work and sincere dedication which pays off in the long run.

However, at whatever point in life we may currently be, we become disgruntled and somewhat resentful of those who do not appreciate the efforts we go to and the hard work which consumes our time. We feel this same frustration while undertaking any project or worldly related affair that, if unsuccessful, could be a cause of heartbreak and a desire to give up. On the other hand, when it comes to Allāh (subḥānahu wa taʿālā), sincerity bares its fruits in both the short and long term.

Sincerity or Ikhlās, is the most important and core base of any ʿibādah as without Ikhlās the act of worship becomes invalid and rejected immediately. Allāh (subḥānahu wa taʿālā) says,

“Indeed, we have sent down to you the Book (O, Muḥammad) in truth. So worship Allāh (being) sincere to Him in Religion. Verily to Allāh belongs the Complete Religion”[1]

“And they were not commanded except to worship Allāh (being) sincere to Him in Religion, inclining to truth and establish prayer and to give Zakah. And that is the correct Religion.”[2]

“Verily, the reward of deeds depends upon the Niyyah (intentions) and every person will get rewarded according to what he has intended.”

“Allāh does not accept any deed except that which is done only for Him and to seek His Countenance.”[3]

Why the emphasis on Ikhlās?

There are several wisdoms in emphasising Ikhlās to such a degree:

I. Ikhlās is the core of Tawḥīd. Tawḥīd is the most essential element in being a Muslim. Without testifying that that there is no deity worthy of worship except Allāh and doing it purely for His Sake and His Sake alone there is a high chance that one could fall into Shirk whether minor or major, knowingly or unknowingly. Major Shirk takes one out of the fold of Islām, while minor Shirk i.e. Riyā, which is to do a deed to show off to someone and seek their attention, makes that deed null and void. Imām Al Izz b. ʿAbdi Salām (raḥimahu Allāhu) said:

“Ikhlās is doing an act of obedience for Allāh’s Sake, not wanting any religious benefit, nor avoiding a worldly calamity, nor wanting to be respected and esteemed by the people.”

“And mention in the Book Mūsā (Moses). Indeed he was Chosen, i.e. Mukhlasan, and he was a Messenger and a Prophet.”[4]

Allāh praised Mūsā (ʿalayhi al-Salām) in the Qur’ān because of his sincerity.

II. A person with Ikhlās may become one of the Siddiqīn, i.e. The Truthful Ones. Allāh says

“And those who obey Allāh and the Messenger, those are with the ones whom Allāh favoured from among the Prophets, the Truthful Ones (Siddiqin), the Martyrs and the Righteous (people).  And excellent are those as companions.”[5]

III. A person who consistently has Ikhlās could become one of the Awliya of Allāh (subḥānahu wa taʿālā) and reach a very high status. May Allāh make us from those. Allāh says

“No doubt! Verily, the Auliya’ of Allāh [i.e. those who believe in the Oneness of Allāh and fear Allāh much (abstain from all kinds of sins and evil deeds which he has forbidden), and love Allāh much (perform all kinds of good deeds which He has ordained)], no fear shall come upon them nor shall they grieve. Those who believed (in the Oneness of Allāh – Islamic Monotheism), and used to fear Allāh much (by abstaining from evil deeds and sins and by doing righteous deeds). For them are glad tidings, in the life of the present world (i.e. righteous dream seen by the person himself or shown to others), and in the Hereafter. No change can there be in the Words of Allāh, this is indeed the supreme success.”[6]

IV. People, by nature, are keen to be praised and appreciated by others and no one is more appreciative of our doing good deeds than our Majestic Creator, subḥānahu wa taʿālā. Allāh says

“And whoever seeks the Hereafter and exerts the effort due to it while he is a believer-it is their efforts which are thankfully appreciated.”[7]

Seeing that the Salaf were the best three generations of the Muslims, it is not surprising at all that they would display astonishing levels of Ikhlās that was unrivalled in the history of mankind.

Imām Abdulrahman b. Abī Layla used the Night Prayer at his house. Whenever he felt that someone was approaching, he would interrupt his prayer and lay in his bed pretending to sleep. Someone would walk in and say: “This man does not tire from sleeping. He spends most of his time asleep in his bed”, not realising that he had been praying during the night and was merely hiding it from them.

Tabiʿī ʿAbdullāh b. Al Mubarak went to engage in Jihād against the Romans with the Muslims and while he was there, a strong and fierce man from the Romans challenged the Muslims to a sword fight. A Muslim came forward only to be killed by the Roman. Another Muslim stepped forward but the Roman killed him, too. The same occurred with a third. At last a man from the Muslims came out, fought the Roman soldier and killed him. The Muslims wondered who this man was as he had covered his face with his shirt. The man who narrates this incident said:

“I took the edge of this sleeve and pulled it away to find that it was ʿAbdullāh b. Al Mubarak.”

He responded with a furious look on his face as if to say, “How can you reveal my face to the Muslims when I was trying to conceal my identity for the Sake of Allāh (subḥānahu wa taʿālā)?”

These are but two examples from a colossal sea of Ikhlās that the Salaf demonstrated. Indeed, the Prophet (sall Allāhu ʿalayhi wa sallam) spoke the truth when he said: