What happened to the “beautiful man” that became Jihadi John? 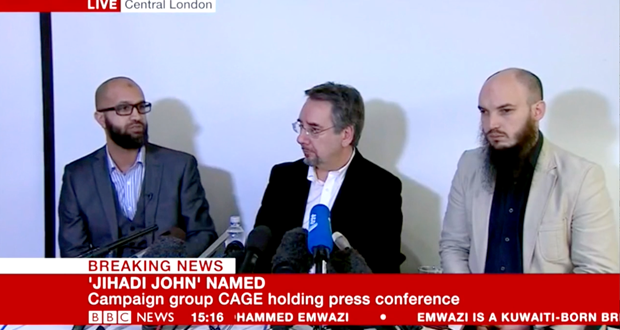 What happened to the “beautiful man” that became Jihadi John?

Most humans, irrelevant of race, religion or ideology, would unequivocally condemn the coldblooded murder of innocent people, whether the perpetrator was “Jihadi John”, named yesterday by the Washington Post [1] as Mohammed Emwazi, or the thousands of Iraqis killed in an illegal war led by the US. The problems is, in such a hypersensitive environment of Islamophobia and anti-Muslim bigotry [2], many people, intentionally or out of genuine ignorance, assume that the default position of Muslims is one which condones violence, hatred and extremism. Consequently, Muslims are then expected to demystify this gross assumption by endlessly condemning crimes committed by a minority.

Muslims living in the West have been condemning acts of terrorism since 9/11; in fact they’ve become an expert community at it [3]. But has this prevented the collective labelling and policy of ‘guilt by association of faith’ that is repeatedly applied whenever a crime is committed by a Muslim? Most certainly not. Such was the case yesterday when advocacy group, CAGE, published email correspondence between the alleged ISIS executioner, and research director Asim Qureshi [4]. During an hour long press conference, Qureshi described Emwazi as a “beautiful young man”, which became the focal point of most news headlines [5]. Unfortunately, the legitimate concerns highlighted by CAGE were lost in a coordinated media frenzy, some outlets overtly accusing the human rights group of being ISIS apologists [6].

Qureshi [7] and media spokesman, Cerie Bulivant [8], explained how Emwazi was harassed by the British security services, and stopped from returning to his birthplace Kuwait, to pursue his career and marry his fiancé. This was dismissed amid the emotional tornado surrounding Jihadi John – and many would argue, rightly so. However, CAGE’s narrative is not one that is unsubstantiated or untested for that matter, a prime example is the killer of British soldier Lee Rigby, Michael Adebolajo. It is public knowledge that the Kenyan authorities had detained Adebolajo at the behest of the MI6, where he was allegedly tortured and sexually abused [9]. In turn, Prime Minister David Cameron has ordered a new inquiry [10] to investigate the security services’ alleged complicity in the treatment of Adebolajo whilst in Kenya.

Neither CAGE nor any ‘Islamist sympathisers’ perceive the MI5’s harassment of Adebolajo and Emwazi as the defining reason for their criminal acts. Rather it is an undeniable fact that at the very least, it was a contributing factor to the radicalisation of both men. The difference between ‘sole’ and ‘partial’ blame must be distinguished, be it the security services’ negligence in preventing these crimes when the individuals were already known to them; or excessively harassing the culprits as part of their ‘counter-terrorism’ strategy. Ultimately, the wider picture would include legitimate foreign policy grievances, mistreatment by the security service, exposure to a fringe interpretation of Islam, as well as psychological issues, which can lead to exceptional cases such as that of Adebolajo and Emwazi. This was the differentiation that the British press failed to address.

The factual account of Qureshi’s relationship with Emwazi, and the issues that the Kuwaiti-born Londoner expressed should have been taken seriously from a national security perspective. Emails sent to Qureshi showed that Emwazi exhausted every possible avenue, which a democratic state has to offer to overcome the supposed hardships he was facing. When interviewing two former university friends of Emwazi, they echoed the same sentiments as Qureshi. They said that during his three years at Westminster University, Emwazi was a “kind, compassionate and understanding person”. Both friends were in absolute shock after hearing Thursday’s revelation in how their good friend, who they spent late nights at the library working on projects, became an ISIS poster boy for killing western hostages.

It is inevitable that the Western world is still recovering from the horrific images of British aid workers and American journalists being beheaded in orange jump suits, by a masked executioner with a London accent. But as difficult as it may be, there must be a genuine attempt in creating a nuanced approach to understand what leads individuals like Adebolajo and Emwazi to resort to such extreme measures. This does not mean that domestic anti-terror policies, foreign policy grievances, ‘jihadist’ ideology, and socioeconomic factors should be exclusively blamed, or over amplified in isolation. All these factors have to be taken into consideration holistically when trying to protect lives.

This cannot be achieved if the higher echelons within the Western political establishment, and pro-war industry continue their imperialistic policies to advance their ideological, and economic interests in the Muslim world. Similarly, those who hijack religion by adopting the militant secular principle of ‘total war’, without any consideration for contracts of security, and preservation of life, should be equally held to account.