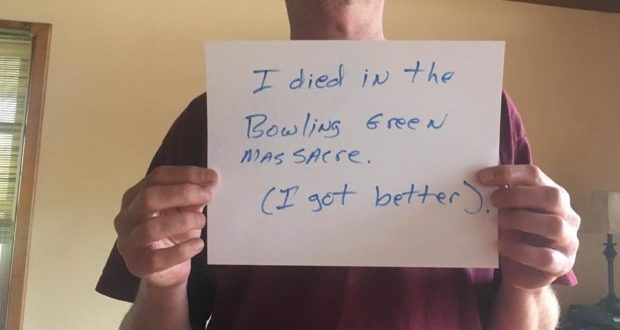 People all over the world have been mocking senior Donald Trump adviser Kellyanne Conway since Friday after she used a TV interview to invent a terrorist attack that never happened, before criticising the media for failing to cover it.

She described the pair as “the masterminds behind” the supposed Kentucky attack and added: “Most people don’t know that because it didn’t get covered.”

Such a massacre never took place and the Obama administration did not place a six-month ban on Iraqi refugees, as Ms Conway also claimed.

A more stringent screening process was imposed after Mohanad Shareef Hammadi and Waad Ramadan Alwan were arrested for trying to send money to al-Qaeda in 2011. They were later jailed for life and for 40 years, respectively. They had been living in Bowling Green and admitted to participating in IED attacks against soldiers in their home country.

One Twitter user mocked the President’s counsellor by posting a GIF of a man being struck between the legs by a bowling ball and saying: “I found evidence of the Bowling Green Massacre!”

Another Twitter user said: “RT if you died in the Bowling Green Massacre.”

“FOR EVERY $5000 DONATION KELLYANNE WILL MAKE UP A TERRORIST ATTACK IN YOUR NAME.”

#BowlingGreenMassacre and #BowlingGreen trended on twitter with many thousands more mocking the debacle, whilst New Yorkers even staged a fake protest.

The Bowling Green Massacre, where the only real casualty was the truth. #BowlingGreenMassacre pic.twitter.com/yvLhtSoaM9