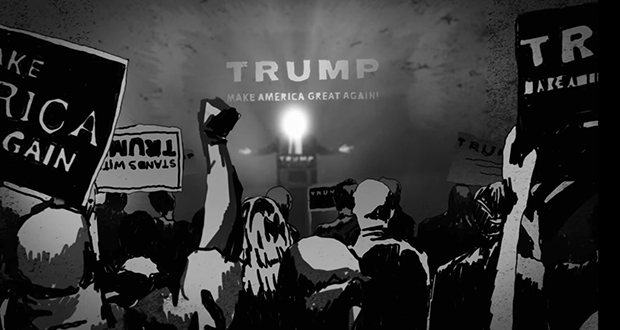 This is a worrying prospect for Muslim civil society, since these “affiliates” as alleged by far right anti Muslim lobbyists,  include mainstream Muslim civil society organisations including the Council on American-Islamic Relations (Cair), the Islamic Society of North America (ISNA) and the Muslim Students Association (MSA).

These are organisations which hundreds of thousands of Muslims have come into contact with over the years. The broad reach of the bill prompted Mike Merryman-Lotze from the American Friends Service Committee in Philadelphia to term it the beginning of the “Muslim registry”.

Banning the MB would be a clear sign that the US is following the politically motivated moves by the military regime in Egypt and its political and financial backers, Saudi Arabia and UAE. This is also in line with the despotic Syrian regime, Bahrain and Russia, all of whom have designated the MB as a “terrorist” organisation as of 2015.

An attack on Islam in the public sphere

The Bill follows the same lines as Trump’s Islam-centred Countering Violent Extremism (CVE) initiative, and the UK government’s PREVENT policy, which both criminalise and condemns as ‘extreme’, beliefs that challenge the status quo, that question aggressive Western foreign and domestic policy, and that support efforts to relieve the suffering of Muslims worldwide.

Not only is this a ‘divide and rule’ tactic, but it has strong potential for a kind of societal “mission creep”; the Bill’s broad definitions and targeting of MB “affiliates” can be widened to include other civil society movements, eventually threatening civil society itself.

The Bill represents a further institutional attack on Islam in the public sphere. A recent article by Alex Delmar-Morgan and Peter Oborne in the Middle East Eye revealed just how the use of the labels “extremist” and “terrorist” against charities in the UK are generated by right-wing organisations who then in turn influence the press and government policy here and in the US.

It is abundantly clear that the labels “extremist” and “terrorist” are deliberately abused to smear Muslim led civil society organisations which encourage active and constructive Muslim participation in public life. This constructive activism is clearly opposed by both PREVENT and CVE agendas, which seek a more pliable Islam.

No evidence in targeting the Muslim Brotherhood

Trump is even ignoring the US State Department and Security Services who say there is no evidence to support the notion that the MB is “terrorist”.

But his position could well be influenced by Arab regimes. The influence of Saudi Arabia in broadening the ban of the MB globally has been evident on both sides of the Atlantic. In an article for the Financial Times in 2014, senior UK officials admitted to being put “under huge pressure, as have the Americans, from the Saudis to do something about the Muslim Brotherhood.”

In Britain, a government review of the MB was conducted in 2015 by Sir John Jenkins, ex-UK Ambassador to Riyadh, and Charles Farr, at the time Director General of the Office for Security and Counter Terrorism in the Home Office, and it concluded that “aspects of Muslim Brotherhood ideology and tactics, in this country and overseas, are contrary to our values and have been contrary to our national interests and our national security”.

The report was strongly contradicted by the Foreign Affairs Committee in its own publication. It stated that Saudi Arabia might have had undue influence on the report through Jenkins. This was given added impetus when reports emerged that the review was launched just six weeks after BAE Systems struck a major sales deal with the Saudis and just three weeks after Saudi Arabia designated the Muslim Brotherhood as a ‘terrorist organisation’.

In a U-turn in state policy, the FAC also said that the MB was in fact a “firewall” against “extremism”, and, like similar political Islamic organisations, “a vehicle through which a significant element of citizens can and should be able to address their grievances”.

A world of increasing “extremes” is dangerous

Finally, we must also not lose sight of the aims at the heart of the Trump government, which is essentially giving the green light to right-wing nationalist movements while honing its sights on Islam. Nothing could be more evidence of this than the statements of Trump’s advisor Steve Bannon of the necessity for the West to ensure that Islam is “kept out of the world”.

Also read: Could Trump actually be good for Muslims?

This hints at a deeper malaise in Western society: the tendency to see Islam and Muslims as “other”, and a corresponding attempt to control and refine a way of life with which it refuses to engage meaningfully, preferring to rely on fear and bullying.

Instead of reading groups like the MB and other Muslim organisations within their context and with all their complexities, the West rather seeks to forcefully impose its own interpretations and worldview on them. This is a violent approach that will result in a more divided world.