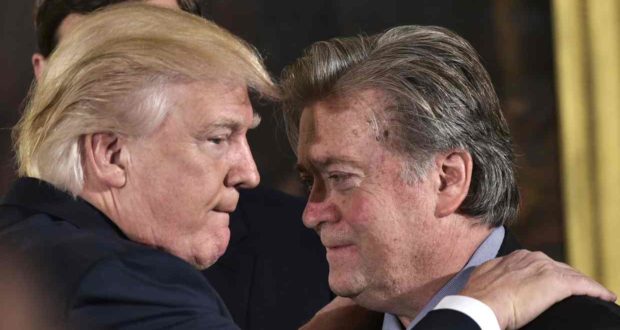 A rightwing network of British bloggers and social media activists has emerged as an increasingly influential voice for white nationalists and for those who oppose multiculturalism. The network is also credited with helping propel Donald Trump to the presidency, a new report has claimed.

In its annual audit of the far right, Hope not Hate, the UK’s largest anti-racism and anti-extremism movement, said that although conventional far right groups such as the English Defence League continue to fracture, new forces have surfaced that can reach a vast international audience and bolster support for the “alt-right”, which is defined as the far right with a fringe “white nationalist element” that opposes multiculturalism and defends “western values”.

Analysis of the global far right network during 2016 – a year that witnessed Brexit and a marked populist resurgence throughout Europe and the US – identified 28 far right groups active in the UK but also named a cohort of Britons that it said were instrumental in propagating “alt-right” views and masterminding attacks on liberal democracy.

“It was a year where a new far right threat became more evident, one that played out largely on social media and to an international audience,” the report states. “It is a threat that has been at the heart of the global fake news phenomenon and one that can engage and mobilise far greater numbers of people across Europe and north America.”

An example of these activities is provided by London-based Paul Watson, described as “editor, staff writer” for the conspiracy website InfoWars – whose most popular article on Friday morning was headlined: “Trump destroys leftist judges.” Watson, who has 483,000 Twitter followers and 764,872 subscribers on YouTube, is named as a central disseminator of the conspiracy theory concerning Hillary Clinton having debilitating health issues in the runup to the US election, including the “Is Hillary Dying?” hoax.

During a series of unashamedly conspiratorial videos that were viewed millions of times, Watson, originally from Sheffield, suggested Clinton might have had syphilis, brain damage and Parkinson’s disease as well as alleging she was a drug abuser. Watson’s conspiracy theories were also taken up by Fox News, the right-leaning US broadcaster.

Another Briton said to have had an influential intervention in the US elections is 52-year-old Jim Dowson, a Scottish Calvinist who founded the far right, anti-Muslim party Britain First. Dowson, from a hub in Hungary, set up a network of US-focused websites and Facebook groups with the intention of promoting Trump and denigrating his rival during the US election.

Dowson’s websites include Patriot News Agency – whose postings have been viewed and shared tens of thousands of times in the US – and whose articles on Friday include a critique of a new Netflix series which it accused of stoking anti-white racism. An investigation by the New York Times in December claimed that although a sizeable volume of US election fake news emanated from central and Eastern Europe, Dowson’s operation was the only obviously politically inspired intervention.

Among the increasingly internationalised far right movement, Dowson is considered adept at building an online fanbase, managing to attract 1.4 million Facebook followers to Britain First. Dowson himself has described his strategy as spreading “devastating anti-Clinton, pro-Trump memes and sound bites into sections of the population too disillusioned with politics to have taken any notice of conventional campaigning”.

According to Hope not Hate’s report, Dowson spent much of 2016 building an international network of far right parties, militia groups and religious extremists. His anti-immigrant group Knights Templar International opened a “branch” in Budapest, Hungary, where former BNP leader Nick Griffin was witnessed as a frequent visitor along with known far right faces from Sweden and the US.

Hope not hate expects Dowson’s influence to grow this year as he fosters relationships with Russia and far-right agitators in Europe and the US. A recent Dowson alliance involves Aleksandr Dugin, a facist with alleged links to the Kremlin and who is understood to be helping Dowson construct a new office in the Serb capital Belgrade that will promote far right news sites entirely in Cyrillic script.

Nick Lowles, chief executive of Hope Not Hate, said: “The fact that a young man sitting in a small flat in south London can create headlines in the US or a British extremist can use the Hungarian capital as a base to influence politics in central, eastern and southern Europe makes monitoring and countering these groups very difficult.”

Another Briton named as a highly effective voice for the far right, even though he has attempted to distance himself from the movement, is Milo Yiannopoulos, technology editor of Breitbart News, the US website which claimed to have 45 million unique readers in the weeks up to and during the aftermath of Trump’s election.

The former executive chairman of Breitbart News, Steve Bannon, is now Trump’s “chief strategist”, a man promotedto the National Security Council and who Time magazine referred to last week as possibly the second most powerful man in the world. In a speech to a conference at the Vatican in 2014, Bannon made it a political objective to undermine liberal democracy in Western Europe through the advancement of nationalist movements.

Yiannopoulos, banned from Twitter in July for “inciting or engaging in the targeted abuse or harassment of others,” reportedly recently signed a £200,000 book deal with Simon & Schuster. The 33-year-old from Kent, recently defended by Trump as a symbol of free speech after demonstrators violently protested against his planned speech at the University of California, Berkeley, has more than 525,000 fans on YouTube.

Other key British figures include vlogger Colin Robertson, who produces white supremacist YouTube videos from his parents’ home in West Lothian, Scotland. Despite such humble surroundings, Robertson was invited to speak at thenotorious far right rally in Washington DC last November that was organised by nationalist thinktank the National Policy Institute (NPI), and where crowds chanted “Hail Trump” and made Nazi salutes.

The 34-year-old also spoke at an inaugural meeting last year of the rightwing Seattle Forum, a branch of a UK network which, according to Hope not Hate, is expanding rapidly. The London Forum held five meetings last year, the latest in September, with speakers including Holocaust denier David Irving and US far right writer F Roger Devlin who contributes to the white nationalist journal Occidental Quarterly. Other Britons who addressed the NPI event in Washington included Matthew Tait, a former British National Party organiser who organised a series of “alt-right” socials in Holborn, London, at the end of last year.

Another development was the government’s decision to proscribe the neo-nazi group National Action as a terrorist organisation. Supporters of the group celebrated the murder of the Labour MP Jo Cox who was killed last June by rightwing extremist Thomas Mair, 53. The authorities are understood to have intelligence that some of its senior activists were trying to encourage younger recruits to conduct acts of terrorism and were required to place antisemitic stickers on Jewish buildings and neighbourhoods as part of their initiation.