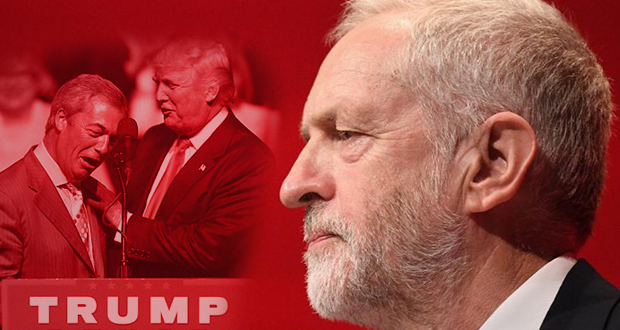 Jeremy Corbyn has insisted Labour will not make “false promises” on reducing immigration as he accused Theresa May of complicity in whipping up hatred against migrants.

The Labour leader warned against sowing division by pandering to anti-migrant sentiment, saying it had already had consequences with hate crime rising in Britain and the US following the Brexit vote and Donald Trump’s election as president.

Both the leave campaign and Trump made cutting immigration central in their pitch to voters and were criticised for what many saw as alarmist rhetoric.

Corbyn derided the “fake anti-elitism” of Trump and the interim Ukip leader, Nigel Farage. He described them as “rich white men”, and stressed that the vote to leave the EU and Trump’s election were together “the most important moment in politics for a generation”.

Rejecting some Labour MPs’ calls to commit to net migration targets, Corbyn told the party’s national policy forum in Loughborough: “We have to choose a different path. There can be no accommodation, now and never, with hate.”

When Asian and Caribbean migrants came to Britain in the mid-20th century, wages were not undercut because workers were protected by strong trade unions and employment rights, he said.

“We will not make false promises on immigration targets as the Tories have done or sow divisions, but we will take decisive action to end the undercutting of workers’ pay and conditions, reinstate the migrant impact fund to support public services and back fair rules on migration,” he said.

He also attacked the Tories for fanning “the flames of fear over immigration, whipping up hatred in the referendum campaign, egged on by their Ukip sidekicks”.

Corbyn said: “This is a government led by Theresa May who, as home secretary, authorised taxpayer-funded vans to tour the streets emblazoned with ‘go home’; who, as home secretary, made up stories about being unable to deport foreign criminals because they had a pet cat; who, was part of a government that called disabled people on benefits scroungers, shirkers, and skivers.

“We will never use that language,” he said.

“It is this culture in which rising levels of hate crime have occurred. Far-right views are now being presented as part of the mainstream, egged on by sections of the media that publish the most hateful and dishonest bile on a routine basis.”

In a direct pitch to Brexit supporters fed up with the status quo, Corbyn echoed the leave campaign’s slogan, saying only Labour could “take back real control”.

“Politicians and political parties have a choice in this age of understandable cynicism,” he said. “Do we play on people’s fears and anxieties? Or do we take what might be the more difficult approach, to restore hope?

“We can see the choice taken by politicians on the hard right – to whip up division against migrants, Muslims, Mexicans, women, LGBT people, people with disabilities.

“The fake anti-elitism of rich white men like Nigel Farage and Donald Trump. It’s farcical at one level, but in reality it’s no joke at all,” he said.

“We’ve seen a similar phenomenon in the US since last week’s presidential election as we saw after Brexit: an appalling rise in hate crime. Saying anything to win a vote has consequences on the ground afterwards.”