People in East Aleppo are running out of time 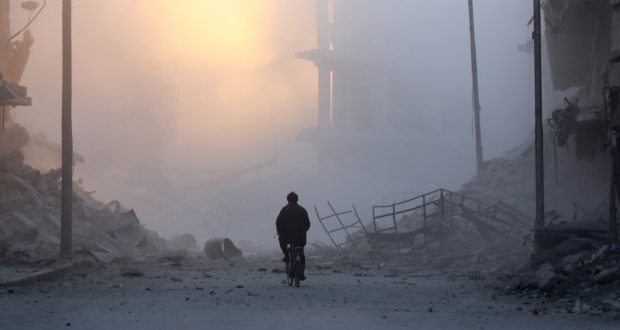 Hamza Abduljabbar’s gnarled hands wipe the dust off the dashboard of his white Isuzu minibus.

Back hunched from decades sitting behind the wheel, Abduljabbar still wakes up each morning at 6am to check on his vehicle – the windows of which have long since been blown out by nearby air strikes – when his rounds of east Aleppo’s Fardous neighbourhood would normally have begun.

“Everything is dusty these days. The bombing never stops,” he says. “Anyway, there’s no fuel, so the car just sits here.” Five years of war and five months of siege have aged the 45-year-old father of three well beyond his years. He hasn’t worked in months.

Government forces, backed by Russian air power and allied militias, began a new push last week to take control of the whole of Syria’s second city, the latest offensive in the uprising-turned-war that has killed more than 400,000 people and forced nearly five million Syrians out of the country in search of safety.

The renewed bombing campaign has killed more than 400 civilians and allowed the government to take over  the strategic Hanano housing district – which could effectively enable government troops to split the rebel-held east in two.

“The rebels have failed to break the siege and are losing territory, and the international community has failed to send in supplies or aid,” said Abduljabbar. “My family and I are surviving day to day here under the barrel bombs and the planes. There’s nowhere else to go.”

The situation in the besieged, rebel-held neighbourhoods of east Aleppo has “gone from terrible to terrifying to now barely survivable by human beings”, UN humanitarian chief Stephen O’Brien told the UN Security Council during his monthly briefing earlier this week.

Food rations pre-positioned in the city by the World Food Programme before UN access was cut off in July ran out on November 13, and aid workers have said that people in the city’s east are “just days” away from starvation.

Food in local markets is scarce and prices have skyrocketed. Fuel and cooking gas are hard to come by in most areas. “There’s no flour, no bread. Most of the bakeries have been destroyed and those that still stand are closed because there isn’t any supplies,” said Samah al-Ahmad.

The 32-year-old mother of four says that the only time she leaves her home in al-Ansari area is to scavenge for basics such as sugar and powdered milk.

Essentials such as salt, which three weeks ago cost 76 cents a kilo, now cost nearly $10 a kilo. The price of one kilo of sugar has jumped to well over $13. Baby formula, nearly impossible to find these days, is about $10 a package. Just three weeks ago the same package cost less than $2. One kilo of meat – a rare commodity – is upwards of $40.

All of the appliances in Samah’s home have been piled into a corner. There hasn’t been any electricity for months and every household chore is done by hand. “The latest bombing has been particularly cruel,” said Samah. “There is no safe place here any more.”

Samah’s husband, injured in an air strike last month, is bedridden. “I can’t go to the hospital to get medicine because most have been destroyed … Those that still function lack some of the most basic medicines.”

There are no fully functioning hospitals in east Aleppo. The last operating medical facility was partially destroyed by an air strike on November 19, leaving up to 275,000 people without access to surgery or specialised care.

The 30 doctors who remain in the city operate in underground facilities and are running low on even the most basic of supplies – including antibiotics, IV fluids and blood bags.

“They are rationing basic supplies … If someone comes in for emergency care after a bombing and [the doctors] fear that more serious patients might soon be arriving, they might hold off on using anesthesia and save it for a patient who is in greater need,” says Elise Baker, a Syria researcher with Physicians for Human Rights.

As supplies continue to dwindle, doctors have reportedly begun using half-doses of antibiotics in an effort to conserve what little resources they have left.

The government blockade on the city’s rebel-controlled eastern neighbourhoods, in place since July, has forced doctors to “cut corners that just shouldn’t be cut”, says Baker, the effects of which could have lasting implications.

“We’ve heard anecdotally that people are developing resistance to antibiotics … using half-doses increases antibiotic resistance, which is a problem that will extend well beyond the end of the conflict.”

As food and fuel quickly run out and winter weather sets in, Abduljabbar believes it’s only a matter of time before Aleppo becomes Syria’s next Daraya.

“There will be a solution in the regime’s favour and the city will be under the regime’s rule whether the rebels want it or not. But it won’t be easy,” he says.

Government forces and members of Lebanon’s Hezbollah armed group surrounded and blockaded Daraya, the rebel-held Damascus suburb, for four years until August when, due to increasing pressure on the ground – only one UN aid shipment had been let in since the beginning of the siege – rebel fighters agreed to give up their heavy weapons and be transferred to the opposition-held province of Idlib.

But while the government and its allies certainly have the upper hand in Aleppo, according to Sam Heller, Syria analyst and fellow with The Century Foundation, it’s not clear what the endgame will look like just yet.

“The regime will not accept a partially autonomous opposition zone in half of the city, and so it’s pushing for a conclusive victory. But the bussing evacuations that have taken place elsewhere have only been arranged on a much smaller scale, and in areas that were already mostly subdued militarily,” says Heller.

The UN estimates that there are nearly 8,000 rebel fighters in besieged east Aleppo, 900 of whom are members of Jabhat Fateh al-Sham – the al-Qaeda-affiliated group formerly known as al-Nusra Front.

“Nothing like this has happened in an area of the size and complexity of east Aleppo, and, with multiple major armed factions inside, it seems unlikely any deal will be coordinated easily or smoothly.”

By the time the Daraya deal took place in August, the suburb’s population – once nearly a quarter of a million – was down to 8,000 people. There were only 800 rebel fighters.

Both the Syrian government and its Russian and Iranian backers understand that waging an assault on an urban area the size of east Aleppo will be a long and bloody battle, according to Yezid Sayigh, a senior associate at the Carnegie Middle East Center. “It took them years to take Daraya,” says Sayigh. “East Aleppo is far bigger and far more difficult an area to take.”

“They’re going to focus on siege tactics to basically engineer a political deal in which the opposition agrees to surrender some of its heavy weapons, while certain categories of fighters are allowed safe passage to other rebel-controlled areas.”

With two months to go before US President Barack Obama hands over the reins to President-elect Donald Trump – and even then, there is a high likelihood that Trump’s Syria policy will play even more into the hands of Assad and Putin than Obama’s – Russia and Assad “aren’t pressed for time”.

“Why would they take high risks or risk high casualties?” asks Sayigh, if starve-or-surrender policies have already proved successful in places such as Daraya and Moadamiya.

“If there was a real desire by people to leave, more people would have crossed by now,” says Sayigh. “People may still be able to hold out for a while.”

Earlier this week, families attempting to escape form east Aleppo via the Kurdish-controlled neighbourhood of Sheikh Maqsoud were forced back by gun fire.

Whether it is by siege-and-starvation or military might, the loss of east Aleppo will come at a “terrible human cost”, according to Heller. But it will also be “a major symbolic defeat for the Syrian opposition”.

“A Syrian opposition that had lost its foothold in the country’s largest city will become a mostly rural insurgency, contesting Syria’s periphery instead of its main population centres and loci of control. But that’s pretty well where we are anyway. So the question is what’s next.”

Sitting in her first-storey apartment under a blanket to protect herself from the cold, Samah, frail and anxious, believes that the fall of east Aleppo is only a matter of time.

“The international community is witnessing massacre after massacre … the rebels are losing neighbourhoods … it’s only a matter of time before the regime takes the east,” she says.

Whether it is cleaning the house or fetching water from a mosque down the street, she works from the moment she wakes until the moment she goes to sleeps to keep herself from thinking.  She is worn to the bone. She is exhausted.

“In the meantime though, we’ll continue to suffer. It really doesn’t matter any more to me [who controls the area] as long as I can get food for my family and have a safe place to live. As long as the fear and the horror end.”