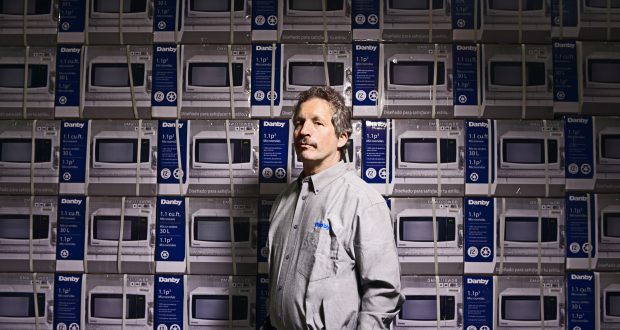 The inspiring story of the man who saved 200 Syrians

When Jim Estill decided to sponsor 50 Syrian refugee families, he didn’t tell anyone about it at first—not his accountant, not his friends, not even his wife. It was the summer of 2015, and the death toll in Syria had reached a quarter of a million people, while another four million had fled the country. All summer long, the news reported horror stories of Syrians drowning in the Mediterranean. Humanitarian aid programs were being cut across the Middle East.

As he watched the news, Estill got worked up. “I didn’t want to be 80 years old and know that I did nothing during the greatest humanitarian crisis of my time,” he says. Estill was disturbed by the wave of xenophobia that had emerged during the Harper administration. He wanted to demonstrate how refugees could help enrich our society. One of his best friends, Franz Hasenfratz, was a refugee who fled Communist Hungary. Hasenfratz went on to establish Linamar, a car-parts manufacturer, which is Guelph’s largest employer, with nearly 10,000 employees. “I was trying to drown out the xenophobes,” Estill says. “When we think of Italians or Irish, we don’t think of them as immigrants. They’re just people.”

So he did some math. He checked Kijiji to find out how much apartments in Guelph were renting for, googled child tax benefits and GST/HST rebates in Ontario, and formulated a monthly food budget. He estimated that $30,000 could support a family of five for one year. He multiplied that number by 50 and realized the total cost—$1.5 million—was one he could easily afford.

Estill is the CEO of Danby, an appliance company with annual sales of $400 million. He got his start reselling computers out of the trunk of his car in the late ’70s in Waterloo. He eventually took over as CEO of Synnex Canada, an information technology firm, where he grossed more than $2 billion in sales each year. In 2015, he came out of semi-retirement to take over as Danby’s CEO. Estill is both pragmatic and dogmatic, spreading his no-nonsense business gospel at every opportunity. He even has a Ted Talk—it’s called “From Zero to $2 Billion.”

At 59, he looks more like a cop than a flashy executive, with his spriggy grey moustache, dishevelled hair and winking grin. Instead of bespoke suits, he wears functional shoes and patterned shirts with the collar open. He and his wife, Elizabeth, a retired lawyer, live in a grey-brick Victorian hidden from the road by a thick wall of trees; his four grown children moved out years ago. He drives a red Prius, which he calls his mid-life-crisis car. “It’s red, isn’t it?” Estill is almost annoyingly disciplined: he doesn’t own a TV and spends his free time reading marketing books, which he reviews on his blog. He runs on a treadmill most mornings, often works 12-hour days and religiously tracks his steps on his FitBit; on a good day, he’ll do 20,000. Outside of work, his main passion is gardening. When we had lunch together, he served me a salad made with tomatoes, beans and beets that he grew himself, topped with salmon he’d caught on a fishing trip to B.C.

Estill has codified his life into a set of what he calls “success habits.” Some of them are very specific: spend 20 minutes outside every day, no matter the weather, and have a “creative oasis” where you can do your best thinking (one of his is a rocking chair by the fireplace in his basement). Other maxims are much broader, like do the right thing—a principle that figured prominently in his decision to sponsor Syrian refugees.

After Labour Day, Estill called a slew of local religious organizations—including three churches, a mosque, a Hindu temple and a synagogue—and aid agencies like the Salvation Army. On September 29, 10 civic leaders sat down in Estill’s boardroom at Danby. He’d made a PowerPoint presentation titled Refugees: The Right Thing to Do. Muhammed Sayyed, the president of the Muslim Society of Guelph, was amazed that so many faith groups were participating, even though most of the refugees would be Muslim. When he met Estill, he was filled with gratitude. “I thought, Wow, there are still people like him,” he said. An hour after the group sat down, the project was launched. The Muslim Society of Guelph would create the infrastructure, handle the paperwork and lead the volunteers. Estill would sustain the program with monthly donations. The group partnered with the Islamic Foundation of Toronto, which was a sponsorship agreement holder. This meant Estill could choose which refugees he wanted to sponsor.

On November 24, 2015, a story about Estill’s project appeared in the Guelph Mercury. Within days, the article had been translated into Arabic and circulated in the Middle East. Refugees who’d spent years trapped in limbo in Lebanon, Jordan and Turkey were suddenly seeing Estill’s face in their social media feeds, along with the promise of a quiet life and stable employment. Soon, they started emailing him directly, pleading with him to bring them and their families to Canada.

In the beginning, he received just a few scattered messages. “Let me introduce myself,” they wrote. “I lost everything…. I can work.” In the following months, the letters kept pouring in, first by the hundreds and then by the thousands. “Mr. Jim Estill,” one man began, “we are Syrian family now we are in Jordan as refugee we want help to get in Canada we have 2 cousin was killed by Syrian government and we have 1 brother missing and 2 brothers detained…please Help us.”

Estill is prototyping an ambitious sponsorship program that he hopes will grow into a full-scale humanitarian movement. He wants to show other wealthy businesspeople across the country how they can front the money, set volunteers in motion and use their professional networks to find jobs for refugees. “If you can run a company with 800 employees, then you can run an organization with 800 volunteers,” he says. He has a clear definition of success for the program: 50 families who work, pay taxes, buy their own groceries and speak English. “We’re not encouraging them to be dependent on us,” he told me. “You’re not doing anyone any favours if you just hand them cheques.”

Before he could bring anyone over, he needed to get many other Guelphites on board. Within a month, more than 800 people had flocked to the cause. There were teachers, doctors, warehouse managers, construction workers. Many Vietnamese boat people who’d arrived as refugees in the ’70s and ’80s showed up to repay the generosity they’d received. Jaya James, a Christian woman affiliated with the First Baptist Church, took six months off her job as a policy advisor with the Ministry of Agriculture to help organize the project. About half of the volunteers wanted to stay in the background—sorting through goods, canvassing for donations, securing accommodations—while others hoped to work directly with the refugees in settlement groups dedicated to each family.

Estill organized the volunteers into eight teams, each led by a director and an assistant director. Every team addressed a different aspect of the newcomers’ needs. A director of mentors would advise the people who’d be working with families. A director of finance would administer the budget for each group and hand out the monthly cheques, which varied from $1,100 to $1,500, depending on the size of the family and the cost of their accommodations. Other teams managed education, health, food, jobs, transportation and housing.

Estill’s most active partners were Muhammed Sayyed and his wife, Sara, from the Muslim Society of Guelph. Sara started out as Estill’s director of mentors, but, over time, she was promoted to be the hands-on leader of the entire operation. Her title is now director of directors, and she makes sure that all of the volunteers have the support they need. Her husband, Muhammed, a former immigration consultant, does the paperwork for the refugees before they arrive, and helps them find and settle into jobs. If Estill is the mover, Sara and Muhammed are the shakers.

One of the biggest challenges Estill encountered was finding places for the refugees to live. Most families find homes in university campus buildings, high-rise apartment buildings and low-income housing projects, but it isn’t always enough: Guelph’s vacancy rate is 0.6 per cent, lower than Toronto’s. Late last fall, Estill approached a local developer and offered to finance new housing. In March, he had an office building refurbished as eight residential units for refugee families, and he’s working on retrofitting other mid-rises across town.

While Estill was organizing housing, his team was receiving more donations than they knew what to do with. Estill relied on the Salvation Army to handle the contributions, but even they were overwhelmed by the sheer number of items. He eventually rented a warehouse space near Danby to store all of the furniture, dishes, car seats and clothes. It’s a large, windowless room that looks like the world’s messiest thrift store. The inventory changes constantly, but, at one point last spring, it included 295 comforters, 120 dish and cutlery sets, 77 electric kettles, 57 pillows, 56 irons, 28 coffee makers, 20 slow cookers and 18 toasters. One room at the back is filled with nothing but toys.

Choosing the first 100 refugees was the easy part: many Syrians who already lived in Guelph begged Estill to help them bring their families to Canada. Some of the other spots were taken by people lucky enough to email Estill soon after the Guelph Mercury story came out. As the requests continued to flood in, Estill was faced with an excruciating Sophie’s Choice, making life-and-death decisions about who he could save and who he couldn’t. “Their stories tugged at my heartstrings in every way,” he says.

He focused on applicants he thought were most likely to succeed in Canada: families with someone available to work and earn money. He was often forced to exclude seniors and singles. “I had to play God,” he told me, his voice cracking with emotion. “It was like encountering a thousand beggars. Who do you help? How do you choose who starves?”

After much deliberation and many sleepless nights, the final number came to 58 families, or about 220 individuals. As the refugees began to arrive, they told Estill about the relatives they wanted to bring to Canada. He could never bring himself to say “no.” He writes down every name he gets, hoping that, somehow, someday, he’ll find a way bring them all here. With each family that arrives, his list gets longer. Last time I checked, in late November, it contained more than 200 names. Everyone who comes to Canada has family members stuck in limbo, struggling to survive. Estill is their best hope.