What does Allah’s mercy offer me? 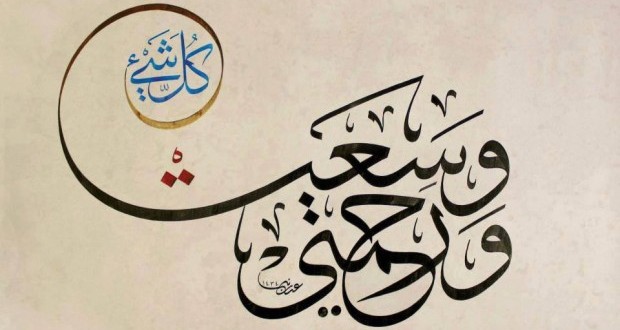 “When Allāh created Ādam and blew within him the soul, Ādam sneezed. He said, “Alhamdulillah” so His Lord said, “O Ādam, Allah has mercy upon you.” These were the first words which the ears of man heard from Āllah.”[1]

The name of Allāh, ArRaḥmān (The Most Merciful), must occupy a special status within the heart of every Muslim since it clearly occupies a special status in the Qur’ān. We have been given knowledge of no less than 99 names of Allāh, all of which are majestic, perfect and glorious. The name “ArRaḥmān” however is particularly unique to every other name, so unique that the only other name which it can be placed side by side with is the greatest of all of these names – “Allāh”.[2] This name, ArRaḥmān has characteristics which are not shared by any other name of our Creator except Allāh. What follows are six examples of its uniqueness and special status.

1 – The name ArRaḥmān never appears in the Qur’ān in the indefinite form (lam ya’ti munakkaran qatt), whilst other names of Allāh appear in both the definite and indefinite form. We find Al-Azīz (definite) and Azīz (indefinite), Al-Ghafūr and Ghafūr. The exception to this rule is the name “Allāh” and another; “ArRaḥmān” There is no “Rahman”.

3 – When Allāh speaks about his Istiwā’ (ascension) over His Throne, the only name that is used is “Allāh”. He says: إِنَّ رَبَّكُمُ اللَّهُ الَّذِي خَلَقَ السَّمَاوَاتِ وَالْأَرْضَ فِي سِتَّةِ أَيَّامٍ ثُمَّ اسْتَوَى

There is one exception to this rule. The only other name used in the Qur’ān when speaking about this is “ArRaḥmān”. Allāh says, الرَّحْمَنُ عَلَى الْعَرْشِ اسْتَوَى

4 – When speaking about the revelation of the Qur’ān, the name “Allāh” is used. He says,  اللَّهُ الَّذِي أَنْزَلَ الْكِتَابَ بِالْحَقِّ

There is one other name that is used in the Qur’ān when speaking about its revelation. That name is “ArRaḥmān”. Allah says, “ArRaḥmān. ʿalamal Qur’ān”

6 – When Allāh speaks about Shafāʿa (intercession) on the Day of Judgement, all the Āyāt in this regard use the name “Allāh”. Allāh says, قُلْ لِلَّهِ الشَّفَاعَةُ جَمِيعًا

What are the implications of this name on our lives? Both ArRaḥmān and ArRaḥīm are taken from the root word: Raḥma (mercy). Ibn Manthūr defines arRaḥma as: الرِّقَّةُ والتَّعَطُّفُ “a weakness in one’s heart and compassion”. Now, we have a problem here, for we can apply this definition to us human beings but can we apply it to Allāh? We cannot, because Allāh is not touched by any weakness and our Creator is not controlled by emotions like we are at times.

When we see a child suffering our hearts are torn to pieces and our eyes flood with tears. It is this feeling of sorrow which then pushes us to assist the child at hand. This is our Raḥma as humans, but can we say the exact same thing about Allāh? Of course not.

A second difference between our mercy and that of Allāh’s is that when we show mercy, it is a two-way benefit. You benefit the subject of mercy by assisting and benefit yourself by easing your sense of guilt and sorrow. As for Allāh’s mercy, it is most certainly not a two way benefit.

Therefore, though Allāh is “ArRaḥmān”, coming from the root word “mercy” and though there is resemblance in that sense, the definition of Allāh’s mercy is most definitely different to ours. Ibnul Qayyim solves the riddle and says, defining the mercy of Allāh and showing the difference between the two:

“The Raḥma of Allāh is a characteristic which entails that Allāh provides His servant with bounties and benefits even if he does not want it and hates it.”[3]

To bring the meaning closer, a parent may force his child to revise for an exam and thus ban him temporarily from seeing friends. The child hates this but the parent sees this as mercy and it surely is.

A mother may shout at her child and use harsh terms should her child cross the road without looking. Despite her harsh words, this is from her mercy. Similarly, Allāh may warn us using the toughest of words, but it is only for our welfare, not His (subḥānahu wa taʿālā). Thus, Allāh says, وَيُحَذِّرُكُمُ اللَّهُ نَفْسَهُ وَاللَّهُ رَءُوفٌ بِالْعِبَاد

Why is this definition given by Imām Ibnu Qayyim so important? We may hear people complaining for not having attained what they had planned for and blaming Allāh for missing out on things which they aspired for. This only happens when the individual in question has failed to understand the nature of Allāh’s mercy. Allāh knows that your pursuit for x,y or z would have harmed you. Thus the mercy of Allāh intervenes but, due to our short-sightedness, we blame Ar-Raḥmān. Just as the poet once said,

“The entrance to success and distinction is sometimes through the doors of sadness and pain.”

What does the Raḥma of Allāh actually offer me?

We often hear Imāms in their Duʿā’ imploring Allāh with heavy weeping for His mercy. We hear our teachers strongly encouraging us to beg Allāh for His mercy, and in our conversations we always hear people saying, “Allāh! Have mercy on us!” Although we know what mercy means as a term, in all honesty, many of us are pestered with a question which we are too shy to vocalise, namely: “If Allāh has mercy on me, what does that mean?” Consider the following carefully, for you will never see the Raḥma of Allāh the same way again.

1: When you beg Allāh, saying “Have mercy on me!” you are asking Allāh to give you knowledge of the Qur’ān. Allāh says,

“Ponder over how Allāh made one’s creation and his teaching a product of Allāh’s mercy, connected to His name, Ar-Raḥmān.”

2: When you cry for Allāh’s mercy, you are also asking Him to make you a successful Dā’iya (caller to Islām). Allāh says to His messenger (sall Allāhu ʿalayhi wa sallam),

Are you tired of being a normal Muslim and crave for the day when people turn to Allāh through you? For homes in Paradise to be built because of you? Do you not long for the skills needed to unlock the highest grades in Jannah? Then beg Allāh for His Raḥma,

“Your Lord has decreed upon Himself mercy: that any of you who does wrong out of ignorance and then repents after that and corrects himself – indeed, He is Forgiving and Merciful.”

If the mercy of Allāh touches you, your sins will forsake you.

4: When you ask for His mercy, you are asking for the easing and removal of every one of your difficulties in life. With the Raḥma of Allāh life becomes a dream come true and, without it, life becomes a long lasting nightmare. By Allāh, one may be sleeping on the softest of silk and eating from the finest of food, but if Allāh’s Raḥma is not existant, that silk will seem like thorns and that food will seem like poison. On the other hand, one may be sleeping on thorns and his income may be minimal, but if the Raḥma of Allāh is with him, those thorns will be made to seem softer than silk, his poverty will seem to be affluence and trauma will seem to be bliss.

Should Allāh accept your Duʿā’ for His Raḥma, you will be the happiest person in the world and no one can take away this Raḥma from you ever again. Allāh says,

“Whatever Allāh grants to people of mercy – none can withhold it; and whatever He withholds – none can release it thereafter. And He is the Exalted in Might, the Wise.”

5: Focus on this last one carefully: When you ask Allāh to give you from His Raḥma, you are asking Him to allow you to walk into Paradise. Our deeds cannot and will not give us access to Jannah on their own, for even the deeds of the Prophets do not qualify them for a moment in Paradise. People will only enter by Allāh’s Raḥma. The Prophet (sall Allāhu ʿalayhi wa sallam) said,

“Do your best in doing good deeds and come as close as you can to perfection, but know that none of you will enter paradise through his good deeds.” The companions asked: “Not even you, O messenger of Allāh?!” He said: “Not even me, unless Allāh showers me with His mercy and His kindness.”[4]

Beware of blocking yourself from Allāh’s mercy

There are still people, however, who block themselves from Allāh’s mercy; people who think wishfully, not knowing that Allāh’s mercy has missed them, simply because they did not expose themselves to His mercy. They do not realise that His mercy requires hard work, tears, effort and sacrifice. They did not read the Āyāt in which Allāh describes those who will earn His Raḥma. Allāh says

“My mercy encompasses all things.” So I will write it for those who fear Me and give Zakāh and those who believe in Our verses.”

“What about he who is devoutly obedient during periods of the night, prostrating and standing in prayer, fearing the Hereafter and hoping for the mercy of his Lord?”

“He (Sāliḥ) said, “O my people, why are you impatient for evil instead of good? Why do you not seek forgiveness of Allāh that you may receive mercy?”

“Establish prayer, give Zakāh and obey the messenger so that you may receive mercy.”

“Call upon Him in fear and aspiration. The mercy of Allāh is near to the doers of good.”

Access to this Raḥma is not through mere hopes and wishful thinking, it is through work, planning, giving up of sinful cravings. When Allāh sees that effort from you, even if it is small, His Raḥma will take you the full length.

Every one of us must have a cave which we retreat to, escaping both the environments and people of Ḥarām. For some, this is a literal cave, just as the youth of the cave said to one another after having found themselves surrounded by sin:

“Seek refuge in the cave; your Lord will open a way for you from His Mercy and will make easy for you your affair”

It was uncomfortable, lonely and dark, but they were certain that Allaāh’s Raḥma would be there and it was.