Summoned to the Final Court 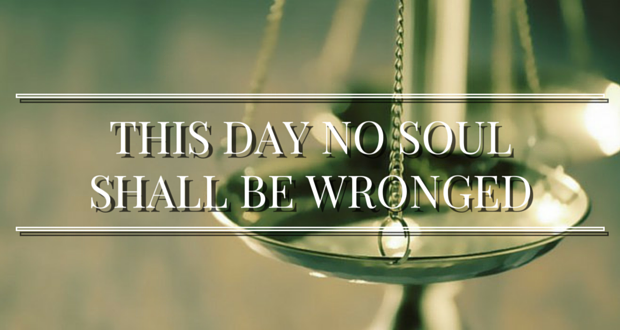 Perfect Justice is seldom achieved in this former life. This is because no matter how meticulously procedures are followed, in many cases, mistakes are made and flaws exist in man-made law itself. A natural consequence of this is that even after the best human endeavours, some injustice is inevitable. It is therefore no surprise that the Most Just, Allāh, will summon mankind, their first and last, on a single plane. A court of truth without error, and just accountability without a spectacle of error.

Part 26 – Summoned to the Final Court

53) It will be but one Great Blast, and they will all be summoned to Our presence.

Imam al-Tabari says regarding this verse that their return to life after their death is through one great blast, the third of three blows of the trumpet. They will all be thus summoned, witnessing the accountability, with none being left behind.[1] The statement ‘In kānat‘ is in the feminine form because it is about to further describe the second blowing or ‘Nafkhah‘, also in the feminine form, mentioned just before. This latter trumpet blow will only occur once without needing recurrence over and over, and by it life will strike into all dead beings.

‘Fa’ithā‘ ‘then all of a sudden’, denoting suddenness using the ‘Fā‘ of ‘Mufāja’ah‘ as if in the blinking of an eye they will all be summoned altogether[2] ‘Jamī’un‘ at the gathering place ‘al-Mahshar‘, meaning not a single person will escape being summoned to us ‘ladaynā‘ for accountability. Ibn ‘Ashur further adds that the implication of suddenness to describe the resurrection (Ba’th) in verse 51 and now here regarding the gathering (Jam’) in verse 53 shows us that the sequence of events will occur in very quick succession.2

“The Trumpet will be blown and at once they will be sliding from their graves towards their Lord.”[3]

“It will be but one Great Blast, and they will all be summoned to Our presence.”[4]

54) Today no soul will be wronged in any way. You will only be repaid for what you did.

Al-Yawm here according to Imam al-Tabari means Yawm al-Qiyāmah.1 Our Lord, Allāh ‘azza wa jal will not treat anyone unjustly in the slightest. He ‘azza wa jal will not put to waste anyone’s reward, or find it deficient[5] or burden anyone with the sins of others but rather every single soul shall be rewarded for what they did or punished for what they committed of sins and crimes.

Ibn ‘Āshūr further explains that the Fā’ of ‘fal-yawma‘ Fā of Faṣīḥa or of clarification to what was implied in the previous verse when the disbelievers asked: “‘Alas for us! Who has raised us from our resting-place?”[6] Now they stand, present before the One who caused them to emerge from their graves, the reason for this emergence being: “You will only be repaid for what you did.”[7]

Imam al-Razi mentions that the use of Fā of Ta’qīb (immediate succession) here is as if to say man will only be brought altogether for reckoning with justice. The absence of injustice is naturally implied by the purpose of their gathering being justice. A person may say to a governor or a judge: “I came to establish justice so (Fā) do not enact injustice;” in other words, the former necessitates the latter.[8]

1) Instead of ‘Indanā Allāh uses ladaynā. This imparts a sense of closeness that ‘Indanā does not. ‘Indanā contains the meaning of owning or belonging though perhaps not possessing at that moment in time. Ladaynā, however, necessarily contains the meaning of possessing there and then. So it is as if Allāh is saying that now they are in His presence.

3) In verse 54, notice the ‘Iltifāt‘ from the 3rd-person narrative (“no self will be wronged…”) to 1st-person narrative (“you will…”) which indicates that the address is moving from being general to being directed at the disbelievers.

These verses magnificently express the ease with which Allāh resurrects all beings, bringing them together in their billions to a single place for accountability, effortlessly. Just one single trumpet blow causes this great spectacle of resurrection as if to say no means, tools or resources are needed for Allāh to accomplish this amazing feat. This sends powerful, yet subtle message to the polytheists of Quraysh that resurrection is true and easy for Allāh.

Al-Razi explains that tucked away inside this verse is something for the believers to celebrate as the latter part of the verse: “You will only be repaid for what you did” is specific to the disbelievers; that they will be punished for the wrongs they did. Preceding the verse with “Today no self will be wronged” will naturally make the believers feel safe, and on top of this is the specific bounty that Allāh has prepared for the believers.

As a matter of fact, where all of humanity to be dealt with Allāh’s justice alone, none would attain salvation, let alone his reward. Rather, his reward is attained entirely through Allāh’s mercy, and His mercy overcomes His punishment. The Prophet sall Allāhu ‘alayhi wasallam says:

“When Allāh completed the creation, He wrote in His Book which is with Him on His Throne, “My Mercy overpowers My Anger”.”[9]

This meaning is further understood when we consider the simplicity of His injunctions. Coupled with this His infinitely wide door of forgiveness, forgiving and wiping away no matter how numerous, large or lengthy a sin was in a matter of a few moments of sincere regret. When the blazing fire, dragged by 70,000 angels was His punishment, a single tear after years of sin was enough to extinguish it with His mercy. When the Hellfire had seven doors, Paradise had eight. When we submitted to Him in our quick passing lives, offering anything but worthy actions, petty beside His majesty, and worthless beside His dominion, He rewarded with Paradise, eternal in its bliss and unimaginable in its beauty. Allāh ‘azza wa jal tells us:

After this realisation, the greatest loss is to be told of a Paradise, prepared such that its expanse is that of the heavens and the earth, yet not set foot in it.[11]

[9] Bukhari on the authority of Abu Hurairah