The Status of the Noble Companions – Part 1 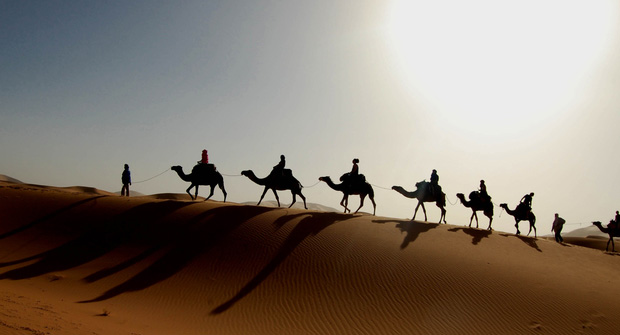 A manifestation of Allah’s mercy and favour upon His slaves is that He sent to them a Messenger to convey His message, guide them to all that is good and warn them from all that is harmful. The Prophet assumed this capacity and accomplished the trust borne on him in a perfect manner; he guided his nation [ummah] towards every good, warned them from every evil and advised them in a sincere and manifest way.

Allah selected a group of people to accompany the Prophet and receive the Shari’ah from him, they are held to be the best of his ummah, which in turn is the best of all ummahs. Allah honoured them with companionship of His Prophet and favoured them in this life by enabling them to see him and hear his speech directly from his noble mouth; that indeed is the favour of Allah, He gives it to whoever He wills and Allah is the Possessor of great bounty.

The Companions conveyed the light and guidance Allah had sent the Prophet with in an impeccable manner. They attained an immense reward for their companionship of the Messenger of Allah, for the jihad they engaged in alongside him and the great efforts they expended in spreading Islam. Even though they are a people who have passed away long ago, they remain in constant receipt of rewards for the Prophet has said, ‘Whosoever calls to guidance has a reward equal to the reward of one who acts upon the guidance without the latter’s own reward decreasing in any way’ as established from the Messenger in a hadith related by Muslim in his Sahih1.

Allah has praised them in His Honoured Book as has the Messenger and this suffices as a testament to their excellence and nobility. Allah says, ‘And the former, the first from amongst the migrants [muhajirun] and the helpers [ansar], and those who followed them in righteousness, Allah is pleased with them and they are pleased with Him. And He has prepared for them gardens of which rivers flow below, abiding therein forever, that is the great success.” Allah says, ‘Muhammad is the Messenger of Allah, and those with him are harsh against the disbelievers and merciful amongst themselves. You see them bowing and prostrating (in prayer), seeking bounty and pleasure from Allah. Their mark (of faith) is on their faces from the effect of prostration; that is their similitude in the Torah, and their similitude in the Gospel [Injil] is like that of a seed which sends forth it’s shoot, then makes it strong, then thick and then causing it to stand erect on it’s stem thereby delighting the sowers – that He may make the disbelievers enraged with them. Allah has promised those among them who believe and work righteous deeds, forgiveness and a great reward.” The clause, ‘that He may make the disbelievers enraged with them’ carries a grave judgement and harsh warning for one who is infuriated by the Companions or has in his heart any hatred for them. Allah also says, ‘…Not equal amongst you are those who spent and fought before al‑Fath2 (with those who did so later). Such are greater in rank than those who spent and fought afterwards; Allah has promised all of them the best (reward), and Allah is well aware of what you do.” Allah says, when specifying those eligible to receive booty, ‘(There is also a share in this booty) for the poor Muhajirun, who were expelled from their homes and wealth as a result of seeking the bounty and pleasure of Allah; they give aid to Allah and His Messenger. They are indeed the truthful ones. And those who lived in Ad-Dar (Madinah) and believed before them, love those who have emigrated to them and have no jealousy concealed in themselves to that which they (i.e., the Muhajirun) have been given. They give preferences to others over themselves even if they themselves are in need; and those protected from their own covetousness, they indeed are the successful ones. And those who come after them say, “Our Lord, forgive us and our brothers who have preceded us in faith [iman]; and do not place in our hearts any hatred for those who have believed. Our Lord, You are indeed, full of Kindness, Most-Merciful”.’

This last passage consists of three verses from Surah Al-Hashr: the first addresses the Muhajirun, the second the Ansar and the third are those who come after the Muhajirun and Ansar who seek forgiveness for them and ask Allah not to place any hatred for them in their hearts. Anyone not belonging to one of these three groups is wretched and entrapped by the snares of Shaytan; and this is why ‘A`ishah said to ‘Urwah Ibn Az-Zubayr in reference to some of these forsaken people, ‘They were ordered to seek forgiveness for the Companions of the Messenger of Allah and instead reviled them!’ Muslim related this towards the end of his Sahih3; and An-Nawawi on commenting on this hadith and referring to these verses states, ‘and with these verses, Imam Malik supported his judgment: that one who reviles the companions has no right to a share in the booty as Allah allowed it only to those who come after them who specifically seek forgiveness for them.’4 Ibn Kathir stated in his Tafsir5, ‘How excellent indeed is the finding derived by Imam Malik from this verse: that the Rafidhi6 who curses the companions has no share in the booty as he lacks the quality found in those whom Allah praises on account of their supplication…’

Jabir reported that it was said to ‘A`ishah, ‘There exists certain people who speak ill about the Companions of the Prophet, including Abu Bakr and ‘Umar!’ to which she replied, ‘And why are you so amazed at such a thing? Their deeds ceased13, so Allah desired that their reward should not.’ Ibn Al-Athir recorded this narration in his book Jami’ Al-Usul. A proof for this fact (mentioned by ‘A`ishah) is the saying of the Prophet in the authentic Hadith, ‘The bankrupt person from my ummah will be the one who will turn up on the Day of Resurrection having prayed, fasted and given zakah, but he comes having hurled abuse upon this one, slandered that one, unlawfully consumed the wealth of someone else, shed the blood of another and struck yet another; so his good deeds will be credited to this one, that one and so on. If however, his good deeds are depleted before his account is settled, then a compensatory amount of their sins will be cast upon him, and he will then be thrown into the Fire.’14

If the many deeds of Khalid Ibn Al-Walid, and others like him from amongst those who accepted Islam after Al‑Hudaybiyyah, are of no comparison with a few deeds of ‘Abdurrahman Ibn ‘Awf and others like him who accepted Islam early on, bearing in mind that all were honoured with having accompanied the Prophet, how will the comparison fare between those who did not accompany the Prophet at all and these exemplary people? The difference is without doubt enormous; and that indeed is the favour of Allah, He gives it to whoever He wills and Allah is the Possessor of great bounty.

These are some of the Qur’anic verses and prophetic narrations confirming the excellence of these virtuous people – the like of whom has never been and nor will there ever be. In our second part, we will relate statements from Muslim scholars that demonstrate their compliance and understanding of the aformentioned texts.