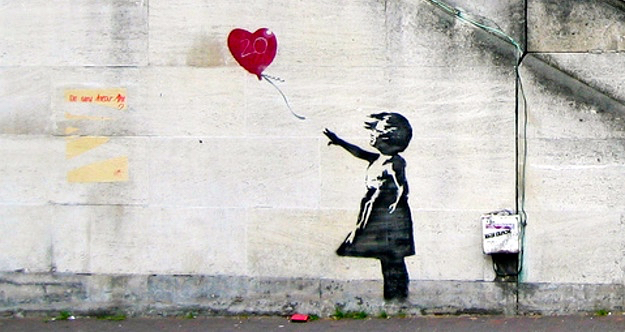 The work of mysterious British graffiti artist Banksy, who sneaked in to Gaza through an underground tunnel from Egypt earlier this year.

At the fall of the Umayyad dynasty in 422AH, the head of each province of Al Andalus (Islamic Spain) declared regional sovereignty, splitting apart what once was a unified, powerful entity. This carved the perfect opportunity for the previously incapable Christian armies to devour Al Andalus piece-meal. Province after province surrendered and Alphonso VI finally laid siege to Seville. Months into the military cordon, the conceited Alphonso, with aims to eradicate the remnants of Islām from Al Andalus, and to humiliate his anxious adversary, wrote:

“I have been irritated by the flies in your town, so if you like, send me a fan to blow them away…”

“In the name of Allāh the Most Gracious the Most Merciful” replied Al Mu’tamid ibn ‘Abbad, the Umayyad Governor of Saville,

“By Allāh, if you do not withdraw, I will waft on you with a fan composed of the army of the Murabiteen (Almoravids).”[1]

Alphonso, knowing well the deep-rooted bravery, staunchness and Īmān of the north-African soldiers, established at the hands of the great scholar ʿAbdullāh b. Yasin and led by the student and formidable warrior Yūsuf b. Tashfin, found no option but to drag his entire army in retreat. Fearing what was already impending, the Battle of al Zallaqa took place between Alphonso and the Murabiteen, and Alphonso at the head of 300,000 strong soldiers lost all but 100 of them.[2] The Islamic identity of Al Andalus was saved by Allāh through the Murabiteen.

On the back of Islam’s dignified history, replete with stories like the above, we once anticipated ‘Arab’ military intervention to save Palestine and our besieged families in Gaza. But after recognising that times had changed, we reduced our demands to just verbal condemnation and political pressure against the tiny Zionist entity. Today, we find ourselves imploring these dogs of regimes, spewed out from the sewage pipes of military coupes, to back off, mind their own business and stop colluding with Israel to destroy Palestine and all remnants of its resistance.

At a distance of zero km South-West of Gaza, there is Egypt, separated by the town of Rafah. The Rafah border crossing was only ever intended for the passage of people, with Israel refusing to allow it to be used for goods, stipulating that the ‘Karem Shalom’ crossing that borders ‘Israel’ be used instead. Following the democratic election of Hamas in June 2007, Egypt decided to close Rafah, its only land crossing with Palestine, permanently, except for sporadic openings which met just a tenth of Gaza residents’ travel needs. Between November 2012 and May 2013, the crossing operated to near full capacity, in parallel with President Morsi’s office. However, only three days after Egypt’s overrule by its military despot and dictator, travel across the border was restricted, shutting it down almost entirely in October 2014.[3]

The crippling siege on Gaza since 2007 had been imposed by land, air and sea, with the passage of goods at the perusal of an enemy, drafting a permitted calorie count,[4] and dictating the types of goods to the level of allowing shampoo but forbidding conditioner and barring (dangerous) ‘Hummus with pine nuts’. Then with the Rafah crossing at the disposal of a collusive tyrant, closing by the drafts of a coupe ‘government’ and ‘media’, intent on vilifying Palestinians,[5] nothing remained for Gazans but to dig tunnels into Egypt, a lifeline for food and vital resource. Thousands of tunnels, some tens of metres deep, constructed meticulously, ventilated and powered were since carved into Egypt, loosening the desperate economic bottleneck on the strangled strip.[6]

For years, Gazans were vindicated for building smuggling tunnels, with no one able to pinpoint where exactly the issue was. Understandably, it aggravated Israelis that the impoverished citizens of Gaza (the desert ‘Arabs’ in their view) proved intellectually, and determinedly light-years ahead of their rivals. Egypt, irritated by extension, justified its attempt to barricade tunnel access by building a steel underground wall on the pretext of ‘weapons smuggling’. But whether the world was brave enough to admit it or not, no one really saw much of a legitimately elected government importing military equipment for its organised army (regardless of what the status quo subjectively classifies them as), amidst three consecutive Israeli onslaughts (2008, 2012, and 2014).

It was never for the Gazans to weep at any of its five borders crossings. They had no choice but to make do with the disgraceful abandonment exhibited by a ‘neighbour’ that shares its religion, language, and (supposedly) its cause, privileged enough to share a border with Gaza, 100 times the length of a football pitch. It is the immeasurable extent of Egypt’s crime towards Gaza that we can never put in words. It is treachery, without borders… quite literally, as the buffoon called Sisi turns to drowning Gaza’s tunnels.

To eradicate the once lifeline of Gaza, essentially deleting what remains of a ‘border’, Egyptian military vehicles have turned to digging a crude canal to divert Mediterranean Sea water into the underground manned tunnels, already destroying, according to estimates, 90% of them.[7] In what intensifies the rate at which Gaza deteriorates, now, according to a UN report, expected to become uninhabitable by 2020,[8] experts believe that the salinity of Gaza’s water will increase twenty-fold as a result.[9] The betrayal of this stooge of a ‘Military Council’, that proponents claim, on national television will lead a people’s army into Jerusalem by way of astrological derivation[10] has further demolished thousands of homes on the Gazan-Sinai border to allow way for the alleged ‘fish farm’.[11] Civilians have been evicted without warning, and the militarily operation in tandem with this project in the Sinai Peninsula has killed over two-thousand of its residents.[12]

But who cares? Israel’s pawn in Ramallah, Abbas and the ‘Palestinian Authority’ who has always demanded that tunnels be destroyed by flooding them or by building an iron fence along the border anyway?[13] Or the ‘democratic’ world? Or the UK, that remains relentless on chasing ‘extremists’ and barring public institutions against quietly undefined ‘extremist entryism’[14], but extends a hand to the autocrat al Sisi, who has murdered thousands on the back of ideology,[15] to visit the UK Prime Minister this month?[16] Absurdly, the UK government claims that the result of an ‘extremist’ ideology is violence but fails to see, that the basis to violence is a violent ideology, such as that espoused by Sisi and his cronies whose rhetoric is cringingly similar to Theresa May’s.[17] Actually, we are not naive, but in Sisi’s case, the enemy is ‘right‘; it is the Gazans. So violence for him is justified. In other words, a violent ideology is actually acceptable, if the recipient of its result is a Muslim. In May’s case, disruption orders and mosque closures achieve ‘British Values’, and in Sisi’s case, his drowning of Gaza’s lifeline tunnels achieve Egyptian values, and on a podium in Westminster their values find poisonous matrimony.

But Gaza remains to stand on its feet, resolute on resistance and impenetrable by one of the most supported militaries in the world. Far from material means, Gaza is Gaza almost by miracle. When Allāh was with the believers of Gaza, the ‘impenetrable’, ‘bomb-proof’, super-strength steel, 18-metre deep underground wall, designed by ‘American army engineers’[18] to cut supply tunnels, was melted by a domestic blow-torch in five hours.[19] When Allāh was with them, inaccessible hard concrete was replaced with hardened wet clay, moulded into ‘artistic’ infrastructures, including houses, police stations and schools, some more than 550 square metres.[20] When Allāh was with them their fishermen, shot at by an Israeli naval vessel, farmed fish in-land, producing varieties and competing with the offshore market.[21] When Allāh was with them 170 twelve-volt hooked-up car batteries were enough to ‘black-start’ a 170MW power plant[22] shattered by the Israeli war machine.[23] When Allāh was with them, the tiny 360km strip’s civilian endured more bombardment than the explosive equivalent of the Nuclear bomb dropped on Hiroshima,[24] only to drive the savage attacker into military mayhem[25] and political disarray[26] for allowing the resistance to set its conditions for the ceasefire.

“If Allāh assists you, then there is none that can overcome you, and if He forsakes you, who is there then that can assist you after Him? And on Allāh should the believers rely.”[27]

Regardless of who opposes them of a plain enemy or lets them down of a patent hypocrite, with them is Allāh and thus they are unharmed, much in resemblance of, or maybe part of the notorious ‘victorious group’, prophesised by our Messenger (sall Allāhu ʿalayhi wa sallam) in numerous Aḥadīth:

“There will always be a group from my Ummah triumphant upon the truth, victorious over their enemies, there will not be affected by those who oppose them except by harm, for they will continue to be like a plate of food between many eaters until the command of Allāh arrives whilst they are like that (triumphant). They said, “O Messenger of Allah, where are they? He said, “In Jerusalem (Baytul-Maqdis) and the precincts of Jerusalem (Baytul-Maqdis).”[28]

Being with them, defending them in every way possible, and never letting them down is thus a privilege before an obligation, and an honour before an expectation. Regardless of who opposes them, they are unaffected but by temporary physical harm, martyrdom, reward and Paradise. So al Sisi can pump away at the same salt-water that drowned the Pharaoh, build buffers, and ‘impenetrable walls’ or sell his worthless soul to a miserable mention at the back of a lost history book, under the conclusive chapter of ‘Zionism’, and may Gaza remain a place for the righteous, a thorn in the neck of its adversaries and a may it pave the way to Jerusalem and its precincts. Amin.