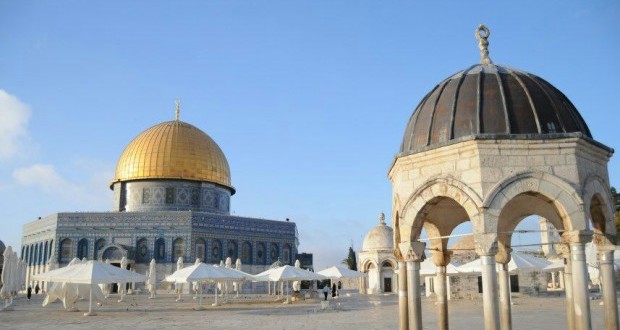 On the 14th of August, over 1,000 Zionists converged in occupied Jerusalem and around 400 of them stormed Masjid Al-Aqsa under the protection of armed Israeli soldiers. The raid coincided with the Jewish occasion of Tisha B’Av, which is believed to mark the destruction of the second Jewish temple in the year 70CE.  In recent years, the frequency of Zionists trespassing into the Holy Sanctuary has increased exponentially as has the number of illegal settlements around the West Bank and Jerusalem. The introduction of a train line linking illegal settlements to the main city has facilitated these worrying trends, which Palestinians see as part of a wider ethnic cleansing project.

Unfortunately, most Muslims are unaware of the on-going assaults on the Holy Sanctuary as well as the Zionist plan to destroy the third holiest site in Islam. With Allah’s permission, this article seeks to shed some light on the plots to destroy Masjid Al-Aqsa and rebuild the alleged ‘Solomon’s Temple’.

According to Zionists, the Temple of Solomon once stood in ancient Palestine and was destroyed by the Babylonians. The temple was later rebuilt and subsequently destroyed by the Romans. Since the establishment of Israel, the Zionists have sought to create an exclusively Jewish State from the Nile to the Euphrates, cleansed of the indigenous Palestinian people. Central to this endeavour is the incremental seizure of the city of Jerusalem, and more specifically Masjid Al-Aqsa, in the hopes of rebuilding the Temple of Solomon over the site where it mythically once stood. This would necessitate the destruction of the Aqsa sanctuary and the erection of a temple, an act which would not only desecrate the religious, universal and historic sanctity of al Aqsa but is in violation of multiple international laws.

These plans are troublingly close to fruition. According to the IMEMC, a Middle East based media centre, “Israeli institutions and organizations are preparing to build the so-called ‘Third Temple’ in place of Al-Aqsa Mosque” but anticipate a “political decision” before commencing the project. The IMEMC states that the scheme has “wide political and popular support” and that the project is expected to take three years to complete. Israeli television stations have reported readiness to begin the project once the political ‘OK’ is given. By all accounts, the plans for the destruction of Al Aqsa are very real. The only issue as far as Israel is concerned is a possible political fallout with some of its neighbours.

Despite the lack of coverage in western media, events on the ground confirm that the battle for Al-Aqsa has entered a dangerous new phase. Where previously the dispute was claimed to have been purely political, religious claims to the land are now dominating the discourse and are becoming louder than ever.

“We are here to announce that we’ve returned to Jerusalem and that we’re preparing our hearts to return to the Temple Mount and rebuild the Temple.”

“We’re not ashamed of this: we want to build the Third Temple on the Temple Mount.”

The ‘Temple Mount’, of course, is the site of the Noble Sanctuary of Al-Aqsa, home to the world famous Dome of the Rock and to Al-Aqsa Masjid; one of Islam’s holiest site; the gathering place of the Prophets, the first direction of prayer and the area where mankind will be resurrected.

The fanatic religious views of the Israeli minister are not in isolation or far from the mainstream. In fact, recent years have seen the prevailing narrative within the Israeli political establishment an extreme one as it views the Aqsa Sanctuary as a hindrance. In reality, the plans for the destruction of the holy site have been long in the making. The movement formally began in 1983 with the founding of the Temple Mount Fund which sought to raise funds from Europe and America to rebuild the Jewish temple. In 1987 the Temple Institute was founded stating that its “long-term goal is to do all in our limited power to bring about the building of the Holy Temple in our time.”1 They have since commissioned and produced pure gold relics with which they intend to decorate their third Temple.

However, it is only in recent years that this has become a politically sanctioned state effort. In September 2000, Ariel Sharon provocatively stormed into Al-Aqsa under the heavy guard of riot police, igniting the second intifada and the consequent slaughter of over 3,200 Palestinians.2 In the following six years, a policy of systematic harassment of worshipers was implemented and multiple restrictions were put in place. Israeli guards were stationed at each entrance into Al-Aqsa and all males under the age of 50 were denied entry into the sanctuary to worship. Since 2014, trespassing into the Al-Aqsa sanctuary has intensified with increasingly larger groups of daily visitors intruding under Israeli military protection. Right wing Israelis including many politicians have also since openly called for the forceful takeover of Al-Aqsa from its rightful people.

The Israelis have grown in confidence in vocalising their extreme views. The Arab League has regularly voiced concerns over Israel’s illegal activities in Jerusalem, while no solid action from its members or the international community has been taken in response. Jordan’s King Abdullah (who is the acclaimed custodian of Al-Aqsa) recently voiced his concern, yet this too has gone largely unnoticed. In a recent statement, the official spokesman of the PA government Yousef Al-Mahmoud called on Muslim countries to “urgently interfere” to save Al-Aqsa and Jerusalem from Israeli aggression, which he said had “become a massive danger on Jerusalem and its Arabic and Islamic identity.”

Muslims world-wide need to wake up to the gravity of this threat. Aside from the immense religious significance of Al-Aqsa, tensions are high in Palestine and further hostile action against the sanctuary is something which is very likely to escalate into a third intifada.  Attempts to destroy the sanctuary by Jewish extremists will see serious ramifications in the region for decades to come just as previous provocations on Al-Aqsa have led to widespread violence, the deaths of thousands and have taken years to quell.

It is almost futile to point out that governments across the globe need to accept their responsibility in the matter. Years of destabilisation and interference in the Middle East have come full circle to haunt western states in the form of newly created terrorist groups and the largest refugee crisis in the history of the world. Britain in particular, which is arguably responsible for the creation of Israel, can no long afford to turn a blind eye to the events unfolding in Jerusalem.

Muslim governments also need to take a stance and not normalise their relationship with Israel whilst the sanctity of Al-Aqsa is at risk. Rather than hollow political gestures, Muslim governments need to put pressure on Israel in order for it to realise that further transgressions will not come without consequence.

Ultimately, we cannot realistically await change and progress to come from the very centres of power which have allowed the situation to deteriorate to this point. Al-Aqsa is slipping out of the hands of the Palestinians and therefore the Muslim Ummah. As individuals, it is our duty to take whatever legitimate steps we can to defend the Holy Sanctuary. The only thing stopping Israel from commencing with its plans (as ever) is their fear of international condemnation and political blowback. Therefore, of our greatest weapons in this fight is the raising awareness about Israel’s crimes against humanity, as well as the raising of our hands in our Du’aa to Allah.