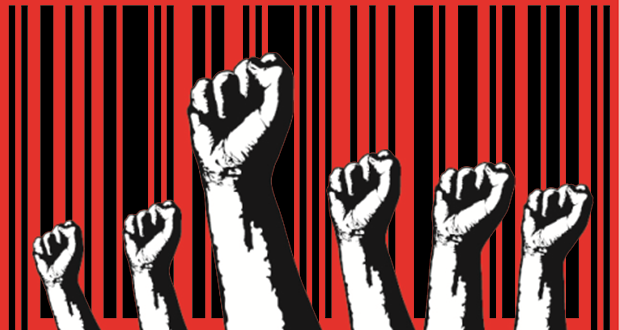 Recently there have been many media stories that may have led you to believe boycotting Israeli goods is illegal. Let us put this matter to rest. The British government has not banned neither is it calling for a ban on the British public to boycott Israel. In other words it is not illegal to boycott Israel.

So what is this talk about boycott? The Conservative government is trying to ban ‘public bodies’, such as city councils and universities, from boycotting products that originate from the West Bank that is occupied by Israel. This attempt by the government to ban city councils from boycotting products of Israeli settlements is not Law and, at present, only a recommendation.

The right to boycott is enshrined in our basic democratic freedom and can be argued as a freedom that marks Britishness. Further to this, the Palestinian BDS National Committee (BNC) responded to the procurement ban stating, “the new documents amount to an attempt to intimidate councils and universities but do not appear to introduce new legal obligations on public bodies.” They added, “it remains perfectly legal for councils and universities to take ethical stances that reflect the views of their communities and exclude companies that violate human rights or commit other forms of gross misconduct from tender exercises.”[1]

The Foreign Minister, while publicly endorsing the banning of boycott by councils and universities, is at odds with the official Foreign and Commonwealth Office (FCO) advice. The FCO website states that it does not encourage or support firms that trade with illegal settlements. It further states that settlements are illegal under international law and constitute an obstacle to peace. The government’s moves are self-contradictory and raise serious questions regarding the erosion of democratic values in the UK.

It is clear to campaigners that government ministers are creating a confusion which may deter some citizens from continuing with the Boycott. We at Friends of Al-Aqsa (FOA) call upon everyone to continue with the boycott of Israeli products and champion the cause for justice and freedom.

BDS activists should remain steadfast in their campaigning, and further lobby councillors, local authorities and universities to join them in the boycott and divest from companies complicit in violations of international law.

“It can be seen that boycott has successfully been a tool used to bring about change for many years throughout history. Most recently, boycotts of Israel across all sectors have been called for worldwide as a protest against their occupation and ill-treatment of the Palestinian people. While boycott can be considered a grassroots level initiative, it has garnered significant support over the years and is coming to impact Israel in various manners.”

Read: Boycott as a Tool for Change

FOA is continuing to build on its own BDS successes, with the current focus being #CheckTheLabel. Every year, Israel exports millions of pounds worth of dates around the world, which many Muslims unknowingly buy and eat when breaking their fast. These dates are often grown in illegal settlements in the Occupied West Bank and the Jordan Valley, on land that has been stolen from Palestinians.

FOA is raising awareness of the existence of these dates, and encouraging shoppers to buy ethically and boycott these dates. Buying these dates helps Israel continue its illegal occupation and oppression of the Palestinian people. The #CheckTheLabel campaign has grown significantly over the last 8 years alongside the growing support for BDS in the UK. The campaign has gone to the heart of the communities in cities and towns across the UK to ensure no one buys these dates.

“A staggering proportion of dates worldwide are stolen from innocent Palestinians ethnically cleansed from their own farms and forced to work as slaves.

Find out the dismal facts and what you can do to avoid supporting such savage behaviour.”

Read: Are you breaking your fasts with stolen dates?