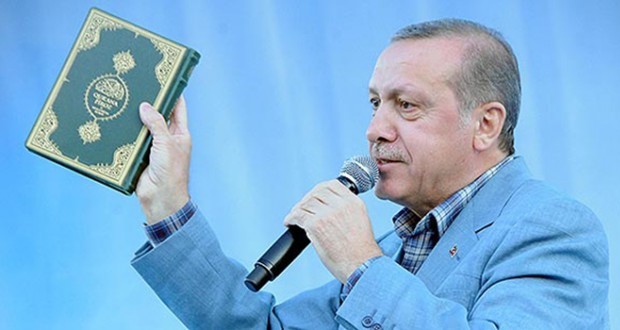 Dr Mohamed Soudan, Foreign Relations Secretary of Egypt’s democratically elected Freedom and Justice Party, led by President Mohammad Morsi, and one of five members of the Muslim Brotherhood’s Arbitration Committee that arbitrates between members of the MB at all levels of the organisation, discusses the remarkable story of Islamic Turkey. Follow this three-part series which explores the transitional era of Turkey, from the struggles of Professor Necmettin Erbakan in a staunchly secularised political climate through to President Erdogan and his path to excellence.

Erdoğan embarked on a slightly different path to his teacher. Excelling in football in his youth to the level of semi-professional, he maintained strong participation in political activism, ascending in areas of responsibility and demonstrating huge competence despite his young age. This included a strong ability to influence both the masses and young and enthused individuals. Along with his strong knowledge base and effective interpersonal abilities, Erdoğan possessed many of the mannerisms inspired by the Qur’ān and the Sunnah of the Prophet (sall Allāhu ʿalayhi wa sallam). Even though he led the largest political party in Turkey, he fervently managed and maintained an intimate relationship with the laypeople, upholding the slogan ‘serving people is a service to truth’. Much of his upbringing was inspired by Ikhwani (Muslim Brotherhood) type reform and activism, including the work of Sayyid Qutb, Hassan al-Banna, Abul A’la Maududi and other such ambassadors of moderate Islamic thought.

Erdoğan’s noticeable political vitality meant he would be elected the Head of the Salvation Party’s Beyoğlu Youth Branch in 1976 and Head of the İstanbul Youth Branch in the same year. By 1984, and now part of the Welfare Party, he was elected Head of the party in the Beyoğlu District, and Istanbul Provincial Head in the following year. Erdoğan believed that his party could increase the potential of success by eliminating the barriers that some of its members placed between themselves and the people.

In 1994, Erdoğan ran for Mayor of the Istanbul Municipality, paving a turning point in his journey, shaping his vision and transforming him from a local to an international figurehead. Erdoğan embarked on a campaign of substantial change in Istanbul, solving a multitude of issues including its water shortage, mounting street waste, environmental pollution, swelling debts, huge financial corruption and the neglect of the historical buildings and monuments that fill the legendary city. Erdoğan was thus able to achieve what others were not. The problem of contaminated water was solved through the laying of hundreds of kilometres of pipeline, a huge venture that sought to manage water and sewage. Moreover, Erdoğan directed the establishment of the first wastewater treatment plant. Another major issue facing Istanbul was the pollution that filled the Bosphorus. Ambitious projects that sought to purify the Bosphorus ensued, with magnificent results.

Erdoğan further embarked on an effort to highlight the historical significance and heritage of the city of Istanbul. He dedicated the required funds to revive all of its main historical attractions. This was a strategic decision in which the investment was replenished through the huge revenues generated by tourism. Istanbul is now one of the world’s main tourist destinations. These achievements were not to pass unhindered, for it enraged the totalitarian secular state that good results be accomplished at the hands of a man of Islamic leanings. Erdoğan was removed from the position of Mayor in 1998 through a court ruling. This was a decision born out of fear of Erdoğan’s increasing popularity, but attributed to his recital of a few couplets of poetry, allegedly inciting religious hatred (in a secular state). Erdoğan was sentenced to 10 months in prison of which he served four.

“The Masājid are our barracks, the domes our helmets, the minarets our bayonets and the faithful our soldiers….”[1]

Erdoğan knew this well, and would often affirm that “our competitors and those of vested interests have come to know that they will never beat us at the ballot boxes, and that they will not be able to kill our future. Thus they have done this, seeing no problem in utilising the law, something we are in need of, to serve their vested interests and despicable desires.”

The passage of time revealed this conspiracy starkly, paving a new era for this leader to become Prime Minister. Even Erdoğan’s dismissal from office was the beginning of a new chapter for him. Instead of making the plight of prison a period of grief, submissiveness and defeat, it became one of complete intellectual enlightenment. In prison, Erdoğan planned the future he envisaged for Turkey. He contemplated on how he would bring Turkey out from its retrogressive state to becoming on par with the world’s greatest nations. Expressing this on entering prison, he said:

“In the four months that I will enter jail, I will busy myself by evaluating the projects we have carried out to this date. All of these projects share a common goal; to excel our nation in the fields of the economy, health, education, science, local administration, sports, human rights, technology, defense and international relations, in a way that suits the third millennium.”

The Formation of the AK Party

Erdoğan’s entering of prison strengthened his relationship with the people, over 33,000 of whom visited him. Here he planned how to ascend to Prime Minister, then onto Presidency. This aspiration came at the same time the Welfare Party was closed and the Virtue Party established. The latter, was reluctant to include young politicians and relied more on its founders and the older generation, with Erbakan making most decisions. Erdoğan thus envisaged forming a new party, seeking to bring together all that youthful energy that struggled to achieve the change it hoped for within its respective parties in the midst of Turkey’s political crisis. This idea formed a distinctive milestone in his life as he began to plan the administration of the entire nation out of its gridlock. He thus turned to the most active and competent members of the general public, and indeed to women and the most astute of economic experts to deliver with him his vision for Turkey.

On the 14th of August 2001, the Justice and Development Party was formed, otherwise known as the AK Party. This was an historic event in Turkey’s modern history. It was the day that defined a new understanding to leadership, one entirely sincere to its nation and state. It was a mode of leadership far from monopolising power. The country’s economy was then in a dire state. Inflation rates were huge, the nation’s deficit was in the region of 50% of GDP and interest rates were soaring. The government turned to the International Monetary Fund and raised taxes. Crime was on the rise and the severe breakdown of security forced the government to call for early elections in June 2002.

Amidst these challenges, the AK Party led a highly professional and organised election campaign through the rhetoric it adopted and through its ability to penetrate all segments of society. Erdoğan laid out three promises: to end the economic crisis; to establish justice and apply punitive measures against corrupt government officials, and to end the period of instability resulting from concurrent coalition party politics. For the new AK Party to enter the elections race in less than a year was a considerable challenge. Erdoğan’s popularity and recognition as someone of sound thought and experience as Mayor of Istanbul, along with the reputation held by the members of the AK Party as being trustworthy and devout, gave them the upper hand in the elections. The AK Party formed the 58th parliament in Turkey’s history all alone, at the hands of Abdullah Gül, Erdoğan’s close friend.

The announcement of the results had a revolutionary effect on Turkish society. The political development of the new Turkey then began by gradually decentralising the state, thus moving away from the dictatorial model that had previously governed. Erdoğan, throughout his entire political career, aspired towards achieving reconciliation between the state and an ideology different to that of the republic and state nationalism. In the final article of this series, God willing, we will look at the long and patient transformation into the new Turkey.