Begging the Helpless for Help 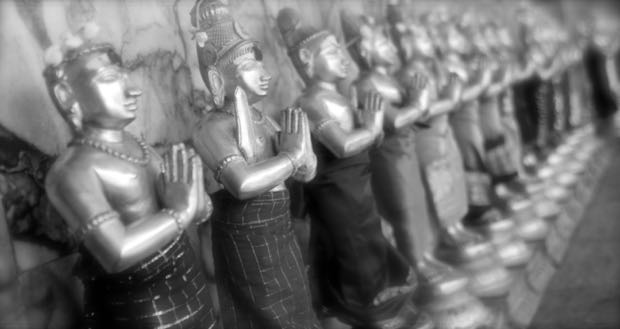 Man is innately coded desiring to submit to a grander entity. The religion-less or atheists are no exception to this, but rather, they look to satiate this innate craving by deifying other animate or inanimate entities by the dictates of servitude or what defines it. This ranges from excessive love to blind following, idolisation or boundless admiration that influences one’s heart and action. The ultimate heartbreaker is to be shunned by the one you expended a life admiring, or let down when you need them most…

Part 36 – Begging the Helpless for Help

74) They have taken gods besides Allah so that perhaps they may be helped.

Imam al-Tabari explains that the polytheists of Makkah took deities beneath Allah and worshiped them in the hope that they would save them from Allah’s punishment.[1] Ibn Kathir adds that they also hoped that these deities would be their intermediaries to Allah so they could draw closer to Him through them and believed that these idols would provide for them on some level.

Despite all of these signs that Allah listed, signifying His inimitable ability, as al-Qurtubi mentions, you still take lesser, incapable gods, recognising that they have no ability.[2]

Ibn ‘Āshūr mention in his Tafsir that after the previous verses that spoke about Allah’s great favours upon man, this verse speaks in amazement at the audacity of the Quraysh to do shirk with Him in spite of recognising how much Allah has given them. They saw the Signs pointing to Allah’s Oneness but acted in complete contradiction to them.[3] Much of this emanated from the bad suspicion they harboured about Allah.

75) They cannot help them even though they are an army mobilised in their support.

Al-Tabari states that had Allah wanted harm to come their way these deities could not help them nor repel harm away from them.[4] As such, these Mushrikūn will be brought together along with their idols like one army and this will happen during the accountability or on the Day of Hisāb.[5] Others said that these Mushrikūn act like a mobilised army (Jund) for them by protecting them, fighting for them and becoming enraged with anyone who speaks against them. Al-Tabari states that this latter view is more sound as in the Hereafter the Mushrikūn will want to flee from their idols (as Allah states in other places in the Qur’an) thus not becoming like a Jund on that day,[6] who otherwise stay together tightly.

The first view, however, can be understood in light of remembering how idols will be brought during the accountability of those who worshipped them, thus the polytheists will see them, serve as a clear evidence against them. It is also said that these idols will become a Jund for Allah in the fire and come back to exact punishment on those who worshipped them in order to prove that they had absolved themselves of the people’s polytheism.

Another view is that they will be brought altogether for accountability as one group or they will follow one another in a line, into the Fire of Hell. This is expounded upon in the Hadith of the Prophet sallAllahu ‘alayhi wasallam:

Ibn ‘Āshūr mentions that the fact these idols will be present during the accountability of those who worshipped them, yet incapable of helping them against Allah’s punishment should cause the Quraysh to lose hope in them.

76) So do not let their words distress you. We know what they keep secret and what they divulge.

Allah then consoles the Prophet sallAllahu ‘alayhi wasallam (Tasliyah), according to Imam al-Tabari by telling him not to grieve over what the polytheists say about him, sallAllahu ‘alayhi wasallam, being a poet or merely reciting poetry. Nor should he grieve over their belying the Ayat of Allah and rejection of his Prophethood.[9] Allah knows that the reason they are saying this is out of envy (Hasad), moreover knowing deep within themselves that the Qur’an is far from being poetry, or anything like it. They intrinsically know that you are not a liar. We know that they recognise and see the truth of what you call to and He also knows what they say in public, openly rejecting the call with their tongues.[10] Ibn Kathir adds that We know what they are up to and We will take them to task for that, bringing before their eyes every small and great misdeed they did.

Ibn ‘Āshūr explains that the request of Allah to not grieve; Lā Yahzunk was linked to the reason for his grievance; specifically his worry over them for rejecting the message and making themselves liable for punishment.[11] Allah then gives the ‘illah, or reasoning as to why the Prophet sallAllahu ‘alayhi wasallam, should not grieve: We will deal with them for everything they did against you.[12]

According to Imam al-Qurtubi, the Quraysh were like a force for their idols as they would actively protect them, ward off any harm coming to them and make a stand for them. It is as if Allah is saying to look at how they behave towards them in such a protective manner when they themselves cannot help you in the first place. You worship them in order to be helped but instead you are the ones helping them.

Reflecting over the incapacity of these idols, inanimate when they were worshipped, protected by their followers and incapable of providing any help on the Day of Judgement, one begins to appreciate the extent of the depression of their subjects. Today, many are less familiar with bowing and prostrating to stone sculptures, but idol-worship is rampant in less tangible ways. Religious figures and celebrities are idolised, many to the extent of worship with all its dictates. Depression is when those who humble their own honour and status to a deity find out that the deity is impoverished to the mercy of another, let alone able to help anyone else.

Even the great Prophet Jesus ‘alayhi al-Salām, one Day will himself long for Allah’s pleasure and mercy and will testify against those who deified him, and this comprises almost a third of humanity. Eventually, he will go to the highest abodes of Paradise, indifferent to the abode of those who devoted their lives to deifying him rather than obeying him. They will find themselves separated from him for flouting his command that they should worship Allah:

“I said to them nothing but what You ordered me to say: ‘Worship Allah, my Lord and your Lord.’ I was a witness against them as long as I remained among them, but when You took me back to You, You were the One watching over them. You are Witness of all things.”[14]

[7] Sunan al Tirmithi on the authority of Abu Hurairah