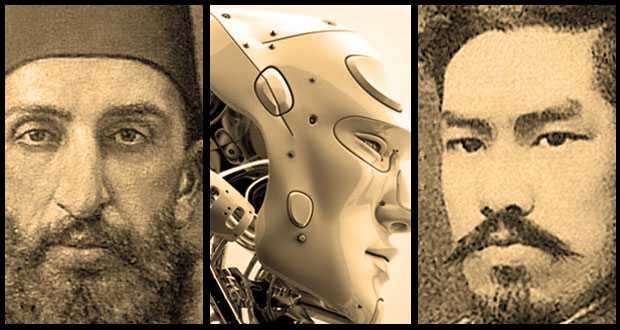 When the Rising Sun met the Crescent Moon

The history of robots has its origins in the ancient world. Even as early as the 12th Century, Muslims such as al-Jazari were making significant advances in the field of automata/automations which are self-operating machines, or machines or control mechanisms designed to automatically follow predetermined sequences of operations or respond to predetermined instructions. In short – robots.

Ibn Jazari built a number of automated objects such as the automated moving peacocks driven by hydropower. One of al-Jazari’s humanoid automata was a waitress that could serve water, tea or drinks. The drink was stored in a tank with a reservoir from where the drink drips into a bucket and, after seven minutes, into a cup, after which the waitress appears from behind automatic doors and serves the drink. In addition to this, the elephant clock described by al-Jazari in 1206 is notable for several innovations. It was the first clock in which an automaton reacted after certain intervals of time (in this case, a humanoid robot striking the cymbal and a mechanical robotic bird chirping) and the first water clock to accurately record the passage of the temporal hours to match the uneven length of days throughout the year.[1]

Fast forward six hundred years and Sultan Abdul Hamid II, who came to the throne in 1876, decided to develop Ottoman relations with the Empire of Japan, which was on the rise in the Far East. It was to be the start of a relationship of two states who were at the diametric extremes of Asia and status — one ultimately rising (Japan) and the other in decline (Ottoman Empire). Prompting the Ottoman goodwill mission to Japan, half a world away, was a sense of shared destiny. The Ottomans, like the Japanese, were a proud people. Also like the Japanese, they had lagged behind their Western counterparts in industrial and economic development and both had endured the humiliation of unequal treaties imposed by Western powers.

The relations were commenced when, in November 1878, the sloop Seiki of the Japanese Imperial Navy arrived in Istanbul en-route to a training mission in Europe. The envoy was received by Sultan Abdul Hamid II and honoured with various medals.[2]

In 1881, a mission led by diplomat Masaharu Yoshida came to the court Yıldız Palace in an effort to conclude agreements relating to trade and wartime status.[3] Upon the visit of Prince Komatsu Akihito to Istanbul in October 1887 and the presentation of Japan’s highest order from the Meiji emperor, the Order of the Chrysanthemum was presented to the Sultan.

The Ottomans continued the exchange by Sultan Abdul Hamid II sending a frigate, the Ertuğrul, on a goodwill visit to Japan in July 1889 with Commander Ali Uthman Pasha and his crew of 609 men. Osman Pasha was to represent the Sultan and was delegated with extraordinary powers.

Before the voyage, Sultan Abdul Hamid II is reported to have sought counsel from the chief cleric, referred to as Shaykhul Islam, Muhammad Cemaleddin Efendi as to what gifts to honour the Japanese with. It was decided that they would provide a number of gifts including the Qur’ān as well as something unique that would capture the imagination of the Japanese. As such, Sultan Abdul Hamid summoned clock master Musa Dede, a great in clock mechanics. Musa Dede was to gather a perfect team and build a unique technological clock.

Musa Dede built an automated clock with a human figure. Every hour the human figure would open up its arms, step half a meter and recite the Adhān (call to prayer). When the Adhān finished, the figure would revert back to its original position. The robotic clock was very large in size. When the robotic clock was presented to Sultan Abdul Hamid II, he was delighted and called it Alâmet as he considered it be a miracle.

After sailing in Asian waters for more than a year, the Ertuğrul finally arrived in Japan in June 1890. Uthman Pasha and his crew completed a successful visit with the Japanese authorities and the imperial family. While in Japan, the admiral received an audience with Emperor Meiji. He presented the monarch with gifts including the robotic clock and bestowed prestigious titles of the Ottoman Empire.

After a three-month stay, the Ertuğrul set sail on 16th September 1890 from Yokohama on its return voyage. The Ertuğrul encountered a typhoon a day out of Yokohama. Tossed by wind and waves throughout the night, the vessel ultimately broke up on rocks off the island of Kii Ōshima in the present-day town of Kushimoto, Wakayama Prefecture.

Five hundred and eighty-seven sailors and officers perished, including Admiral Uthman Pasha. Kii Ōshima islanders braved the typhoon, making frantic efforts to save 69 members of the vessel’s contingent. Word of their heroic deeds soon reached the seat of power of the Ottomans in Istanbul, where it elicited an effusion of pro-Japanese sentiment. The Ertuğrul’s survivors left Tokyo for Constantinople aboard the Japanese corvettes Hiei and Kongō in early October 1890. They arrived safely in January 1891, occasioning a public outpouring of gratitude towards Japan from the Ottomans.

Also arriving with the survivors on the ship from Japan was a young Japanese journalist by the name of Shotaro Noda who raised donations in Japan for the martyrs’ families. He handed these donations to Turkish authorities and even met Sultan Abdul Hamid II, who asked him to stay in Istanbul and teach Japanese to Ottoman officers. During his stay in Istanbul, he met Abdullah Quilliam, an English Muslim from Liverpool, Britain, who introduced Noda to Islam. Quite convinced after a lengthy discussion that Islām is the truth, Noda embraced Islām and chose to be named Abdul Haleem. In fact, Abdul Haleem Noda is considered by many to be the first Japanese Muslim.[4] Another Japanese by the name of Yamada Torajirō was also aboard the ship to Istanbul. Any Japanese tourist visiting the Topkapi Palace today may well be struck by a display of a samurai armour and helmet held there. It was presented, along with a sword, to the Sultan Abdul Hamid II by Yamada Torajirō. Yamada proved to be an important pioneer in the history of Turkish-Japanese relations and remained in the imperial capital for almost twenty years.[5]

Whilst the tragedy of the Ertuğrul has endured, the small matter of the robotic clock, the Alâmet, has been lost. In an age when Japan is considered the leader in the field of automated robotics, we can only wonder as to the impact Musa Dede’s invention had on the Japanese. Some scholars, such as the Turkish historian and author Oktan Keles, believe that there is every possibility that this could have been the spark of interest in the nation’s love affair with robots.[6] In reality, it is difficult to know whether it had any impact, at all. Whilst the first known robot to be made in Japan is believed to be ‘Lilliput’ in Japan in the 1930s,[7] it is known that one of Japan’s greatest inventors and craftsmen, Hisashige Tanaka (d. 1881), who is considered to be the founder of Toshiba, had by this time already created a number of complex mechanised clocks and other such objects. What is clear, however, is that the Alâmet is likely the first ever Adhān clock.

Also of note is the compassion demonstrated by the Japanese people in saving and helping return to Istanbul the survivors of the Frigate. It left a lasting memory of gratitude in the minds of the Turkish people. That sentiment has endured on both sides; today, atop a hill on Kii Ōshima, overlooking the site of the disaster, stands a monument to the lives lost there. The town of Kushimoto holds a memorial service there every five years in honour of the victims. The incident also remained in the memory of the Turks who, 95 years later, sought to repay the debt of gratitude to the Japanese. In 1985 an emergency Turkish Airlines flight was deployed to rescue 215 Japanese passengers stranded in Tehran during an aviation blockade during the Iraq-Iran war.

More recently, some 600 people from Turkey and Japan gathered at the monument for its 125th-anniversary ceremony in 2015.[8]

Thus, this tragic accident became a solemn symbol of friendship between the two nations that continues to today.

[5] Selçuk Esenbel, ‘A Japanese romantic in Istanbul: the life of Yamada Torajirō and his Toruko gakan’, Bulletin of the School of Oriental and African Studies, Volume 59, Issue 2 June 1996, pp. 237-252