Afghanistan a “testing ground for US mass killing weaponry” 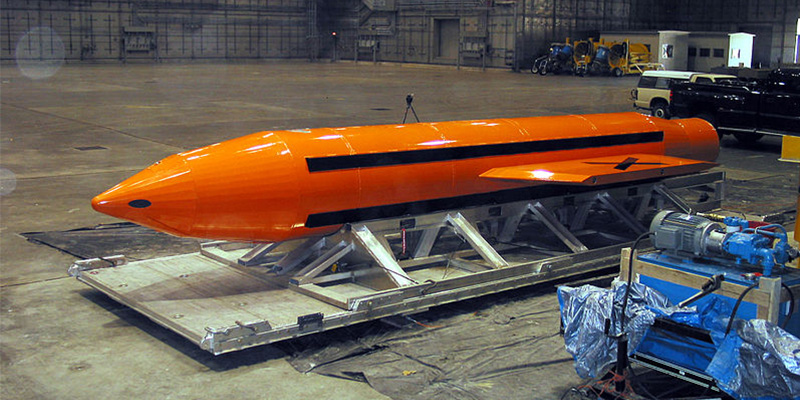 London – The dropping of a 21,600 pound bomb – the largest non-nuclear weapon – on Afghanistan by the United States is evidence that the Trump government is using Afghanistan as a live human experimental field for its weaponry.

The bomb, which has a mile-long radius and is capable of massive devastation including obliteration, crushed internal organs, bleeding ears and loss of hearing, massive shockwaves, and huge environmental and infrastructure damage, was dropped on the orders of Army Gen. John Nicholson in Afghanistan.

According to local reports, the bomb shook the entire district. There is not a single home without a broken window and shrapnel travelled as far as the district headquarters. A local villager said it “felt like doomsday”. Another added that he lost his livestock and described a panic with relatives checking on each other.

“This is not the first time the US has dropped the closest conventional bomb to nuclear weapons. I witnessed US planes drop 15,000lbs “daisy cutter” bombs in Afghanistan in 2001. It was mass killing mastered to an American art.”

“This bombing was ordered by an army general who did not need direct authorisation from the executive. With Trump also signing off responsibility for drone strikes to the CIA, and reducing the necessary checks to prevent civilian casualties, the United States is now openly bombing with no public oversight, a new level of arrogance as a military state. More of this will not bring peace.”

“We do not trust United States assurances that they have minimized civilian casualties. Already the US coalition has killed nearly 2000 civilians in Iraq and Syria. Such actions do nothing to win support and rather will perpetuate a cycle of violence that has now lasted 16 years and killed over 220,000 Afghans.”

Source: The Lexington Institute and Globalsecurity.org