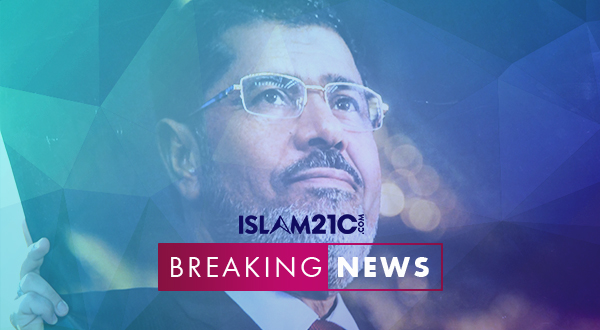 Whilst in prison Morsi was known to have had a history of several health issues. These included diabetes and liver and kidney disease.

Human Rights Watch said today that the death of Morsi was tragic however it was “predictable” given Egyptian authorities’ poor prison conditions and “failure” to allow him medical care.

The Middle East director of HRW, Sarah Leah Whitson, in a tweet stated that the news of the death of Morsi was “terrible but entirely predictable” given the government “failure to allow him adequate medical care, much less family visits.”

Muslims across the world including several scholars and activists took to social media to mourn the death of Mohamed Morsi.

Anas Altikriti, the CEO and founder of ‘The Cordoba Foundation’ said:

Make no mistake, he might have suffered a heart attack but the only freely fairly and democratically elected president of #Egypt was assassinated today.

His family have been appealing to the world to stand up for his rights as a political prisoner for over 2 years. #Morsi

Our heartfelt condolences for the tragic death of President Mohammed Morsi, elected by the people and overthrown by a bloody coup.

His memory will live on to carry the torch of justice, freedom and democracy.

The first world leader to respond in reaction to the news was Turkish President Recep Tayyip Erdogan who had very close ties with Morsi.

He paid tribute to Morsi and called him a “martyr.”

“May Allah rest our brother Morsi, our martyr’s soul in peace,”

The wife of Jamal Khashoggi tweeted:

May Allah bless #PresidentMohamedMorsi, the first ever elected president in #Egypt’s history.
Dear Martyr Morsi, please convey my salam to Jamal, my love.
You were all betrayed by your own people.
My condolences to president Morsi’s family. pic.twitter.com/67Zt51cNco

Also read: Morsi Smiles: what can my enemies do to me?