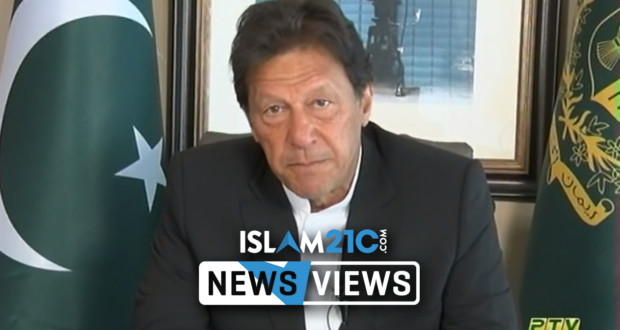 Pakistan PM Imran Khan issued an address to the Pakistani people and India in response to recent escalation by both sides.

In the name of Allāh, the Most Gracious, Most Merciful

My fellow Pakistanis, I wanted to talk in confidence about the situation that has been developing since yesterday morning.

After Pulwama we offered India [to have] any type of investigation whatsoever that they wanted to conduct. We are ready for this. In Pulwama they had causalities. I know the intensity of pain it must have caused to the victims and their survivors. During the last ten years we have suffered more than 70,000 casualties; during these last ten years, how many hospitals have I visited? I have seen bomb-blast victims who have lost their arms and legs, who cannot walk, those who have lost eyes… I strongly feel for those who have left this world and the survivors. This is the reason that we straightaway offered India that if they wanted to conduct an investigation of any type and if any Pakistani was found involved in this [attack] Pakistan will give full cooperation to them.

We made this offer because this is not in Pakistan’s interest that our land is used to launch terror attacks anywhere in the world. Nor will we allow anyone to use Pakistan’s land from outside. In that manner there was no dispute about this. Despite this, I had the fear that notwithstanding this offer India would take some action. That’s why I made it clear that if they acted like this, we would be forced to retaliate. No sovereign country in the world would allow its land to be attacked by another country. Nor would any allow another country to make unilateral decision that the country was guilty and also allow it to act as the judge, jury and executioner.

The reason why I had suspected this is that because India has elections coming up and because of this it would act.  That’s why I said to India [that if it made wreckless moves] we would have to retaliate.

Yesterday the army chief, air chief and I discussed the situation. We did not take any action yesterday morning because until then we did not have full information about the extent of damage [caused by India’s bombing].  This would have been extremely irresponsible of Pakistan to act and cause casualties on the Indian side while we had suffered no casualties. That’s why we waited and took action today.

We had planned our attacks making sure that there were no casualties or collateral damage. We only wanted to tell India that if they could violate our territories, we too had the capability to reach into their territory and take action. This is what our action was aimed at.

Two Indian MIG fighters crossed into Pakistani territory and they were shot down. The pilots [of these two planes] are with us. But where do we go now? I am now addressing India. The situation demands that we use intelligence and act wisely. In all the big wars ever fought in the world, miscalculation [about the consequences] was the prime reason. None of those who initiated those wars knew where those wars would lead.

The first world war was supposed to finish in months—it took six years to come to an end. In the second world war there came a time when Hitler thought to conquer Russia. He did not think that the war would be prolonged until winter and would lead to his destruction. Similarly, in its “war on terror” did America think that it would remain entangled for 17 years in Afghanistan? Did America think that the Vietnam war would last that long?

World history teaches us that wars are the results of miscalculations. I want to ask India, can we, with the [destructive] weapons that both of us have, afford miscalculation? Should we not ponder over where this war would lead to, should this be allowed to escalate?  Neither I nor will Narendra Modi be able to control it. That’s why I again invite you for negotiations. I have told you that [I can feel] the intense pain that you have suffered as a result of Pulwama. If you want to talk about terrorism we are ready for this. But I reiterate that better sense should prevail. We should sit down and talk and solve our problems through negotiations.