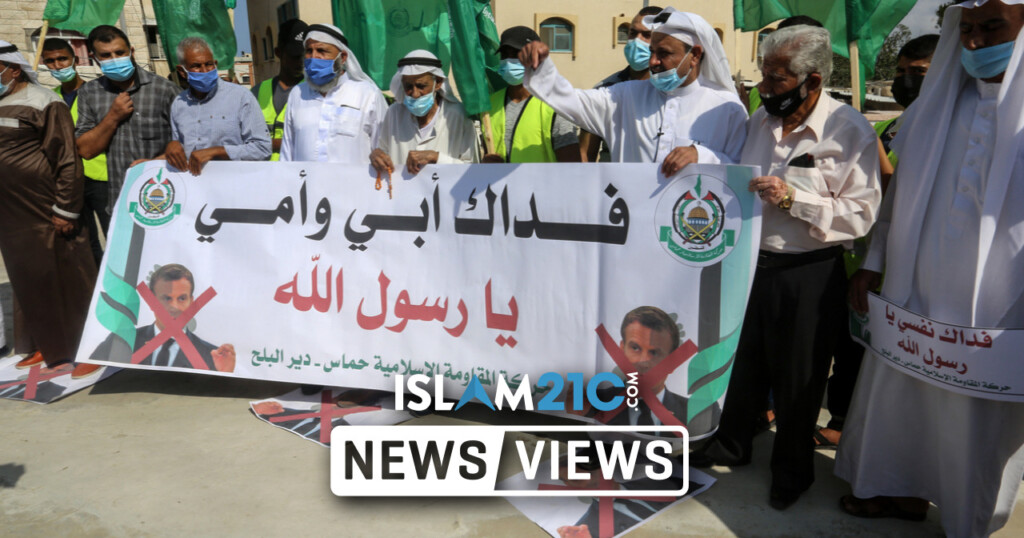 Protests against French President Emmanuel Macron are spreading across the world following his defence of caricatures against the Prophet Muhammad (sall Allāhu ‘alayhi wa sallam).

Tens of thousands of Muslims have taken part in demonstrations worldwide condemning the stance of the French government. This has been followed by a widespread boycott of French products and services.

Outrage against France has been spreading across the Muslim world following the French President’s remarks in defence of satirical cartoons attacking Islam and the Prophet Muhammad.

Macron’s statements led to a tidal wave of boycotts and protests across the Muslim world, with supermarkets and shopping centres removing French products from their shelves. As the embargo on France spreads, the French government has been scrambling to clean up Macron’s diplomatic disaster, pleading with Muslim countries to end the boycott.[1]

Protestors online and around the world have been campaigning under the slogan “Anyone but the Messenger of Allah”, making it clear that insulting the Prophet Muhammad is a red line that should not be crossed.

You are the light the guide of all life
You're the essence of beauty the best of mankind
Forever you'll be the source of all truth
Peace be upon you Oh Prophet Muhammadﷺ♥️#إلا_رسول_الله #OurProphetOurHonour #OneUmmahOneNation#boycottfrenchproduct #FranceShameOnYou pic.twitter.com/JZ7VgJMbIC

The backlash against France has spread across the diverse Muslim world with its varying cultures, languages, schools of thought, as well as social, economic, and political environments.

Palestinians in Gaza, the West Bank, and Tel-Aviv have gathered in protest against the French President.

One of the protesters said: “Our stand is to show our loyalty to the Prophet, and to show the French President and others that by his senseless statements, he was stripped of all attributes of responsibility.”

The protestor added that Macron’s comments had only served to unite “our hearts on the love of the Prophet peace be upon him” while “making his memory alive in every household” in spite of the COVID-19 lockdown. [2]

Hundreds gathered in protest in a separate demonstration on Saturday outside the residence of France’s ambassador to Israel. One of the protestors called out “the extreme right” political position of the French government, adding: “The Prophet Muhammad is the most sacred thing in Islam and whoever attacks his honour attacks an entire people.”[3]

In Bangladesh, Muslims joined the international boycott of France, which had already spread worldwide in Jordan, Kuwait, and Qatar.

Tens of thousands of protestors gathered in the streets of Dhaka on Tuesday, outraged at Macron’s comments and burning an effigy of the President.

Similar marches were also held Iraq, Turkey, and Pakistan. In the city of Karachi, another demonstration saw protestors burning images of Macron as well as French flags while promoting the boycott.

Hundreds of protestors held signs saying “I love the Prophet Muhammad” while printed images of Macron were laid on the ground for protestors to tread over.

Zahid Hafeez Chaudhri, the spokesman for the Pakistani Foreign Ministry, told the AFP news agency that the French ambassador to Pakistan was summoned “to express Pakistan’s concern about the systematic Islamophobic campaign under the guise of freedom of expression.”[4]

“It is regrettable that he chose to encourage Islamophobia by attacking Islam rather than the terrorists who practice violence, whether they are Muslims, white supremacists or Nazi ideologues.”

In Iran, the newspaper Vatan-e Emrooz published a caricature of Macron as Satan on its front page, which has since gone viral.[5]

Meanwhile, the Twitter account of the Saudi Arabian Foreign Ministry tweeted: “We reject any attempt to link Islam with terrorism”, referring to the beheading of Samuel Paty.

The tweet continued: “We denounce the offensive cartoons of the Prophet of Guidance and the Messenger of Peace, or any of the prophets and messengers, peace be upon them.”[6]

The Muslim Ummah undoubtedly remains vastly disunited on many key political and religious issues affecting Muslims today. While various Muslim countries have led the way in political and economic responses to these recent incidents, others have only offered token responses or compromised mixed messages.

However, on an individual level, the response of the average Muslim has been unanimous. No Muslim can accept an insult to the most beloved man in the history of humanity: Muhammad (sall Allāhu ‘alayhi wa sallam).

If you are considering joining the boycott, here is a list of some well-known French brands to avoid: 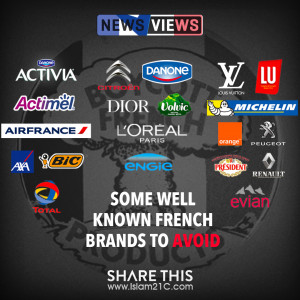