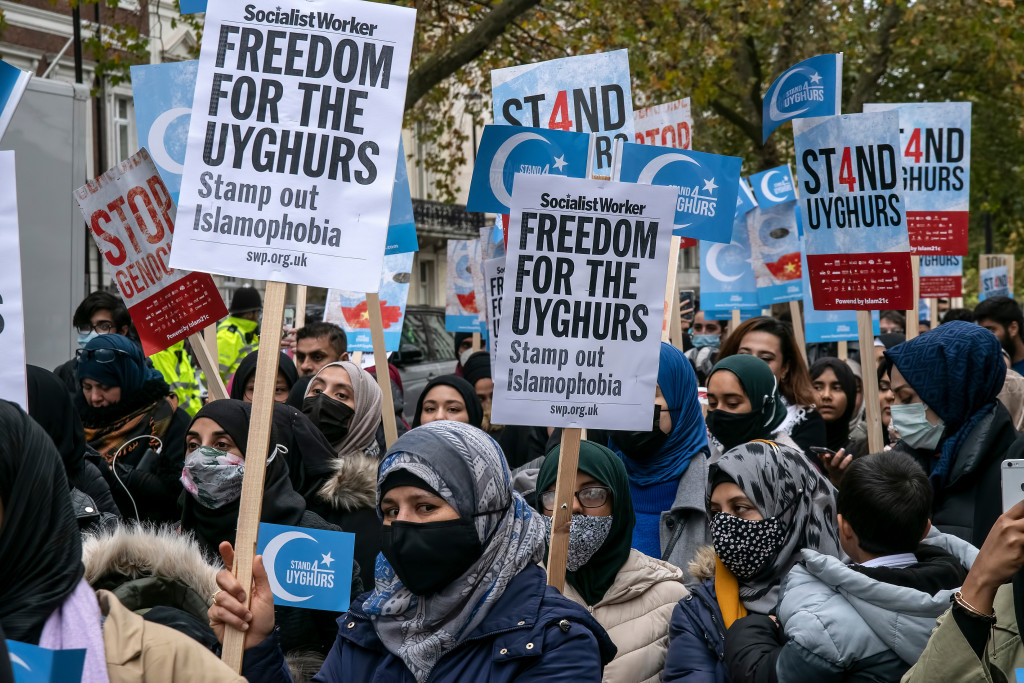 In a recent report published by The Times, China disclosed fears for its newly planned £750 million embassy in London by expressing anxieties that it might be “harassed”.[1] China urges the UK government to protect their proposed “700,000 square ft complex opposite the Tower of London”, which would make it “one of the largest embassies in the world”.[2]

On the 1st of July 2021, hundreds of people joined the Stand4Uyghurs campaign organised by Islam21c, and marched the streets of London outside the Chinese embassy, demanding the Chinese Communist Party (CCP) to ‘end it’s genocidal policies and close down the concentration camps immediately’ 3. This was followed by a demonstration on the 13th of November where thousands across both London and Manchester protested outside the London Chinese Embassy and Manchester Chinese Consulate . Could it be that the communities acts of solidarity with the Uyghurs is in fact putting pressure on the Chinese government?

“This is another huge victory for all activists campaigning against the Uyghur genocide. Islam21c have been raising awareness of their oppression for 8 years now but in 2021 we decided it was time to ramp up the pressure by setting up Stand4Uyghurs and organising the first demo of its kind outside the London and Manchester Chinese embassies. To find the Chinese embassy react in this way to the many protests going on is just great news for us all. It really exposes their vulnerability to grass roots pressure. But this wasn’t the only win. We witnessed a huge victory off the back of our demonstrations last year when reports reached us stating the CCP reacted by forcing open the mosques in Xinjiang for the Uyghurs to perform their Eid prayer. We hope the Uyghurs are feeling some relief in knowing there is a movement of solidarity growing across the world and they are not alone or forgotten.” Aman Dhaliwal, Managing Director of Islam21c

Ann Corbett, the director of community safety, reportedly told the local police and planning committee that “protests could cause significant disruption to roads, including on Tower Bridge”. She added that “there is growing local sentiment and concerns about ongoing human rights violations of the largely Muslim Uighur community”.1 The embassy reportedly claimed the following in a statement: “A handful of anti-China elements use so-called Xinjiang related issue to harass Chinese diplomatic mission in the UK and disrupt local public order. This must not be allowed.”1

Previously, the Tower Hamlets council already expressed its concerns about this new construction; it responded to this application by pushing to rename the roads surrounding the complex “Tibet Hill, Uyghur Court, and Hong Kong Square”, which are representative of the communities being oppressed by the Chinese government.[3]

This statement of ‘fear’ and ‘harassment’ ironically comes in the wake of substantial proofs of the Chinese government conducting mass imprisonment, torture, suppression of the Uyghur population, crimes against humanity, and cultural genocide![4] It was just in December 2021 when the People’s Tribunal confirmed without any reasonable doubt that a genocide is taking place.[5]

While the UK declared a diplomatic boycott of the Winter Beijing Olympics, they also have a responsibility to publicly call out the Chinese government for their crimes. Furthermore, they should oppose the extravagant construction of an embassy linked with what is described as being “the gravest human rights violations and international crimes”.4

Stand4Uyghurs is a campaign comprising of over 50 Muslim organisations across the UK, this coalition of partners aim to mobilise and channel the community towards effective action in solidarity with the millions of Uyghurs being oppressed and persecuted. Demonstrations are an integral aspect of the campaign which effectively puts pressure on those complicit in the genocide and holds such powers to account for their crimes. China’s fear for their new embassy being ‘harassed’ suggests that our actions DO have an impact and they ARE under pressure. We must not succumb to their warnings nor miscalculated efforts to protect their embassy from protestors who seek to stand against their heinous crimes. We must continue standing for Uyghurs.

Our beloved Prophet ﷺ reminded us that “the greatest sacred struggle (jihad) is to speak the truth in front of a tyrannical ruler”. This form of noble struggle was exemplified by the Prophet Mūsā عليه السلام when he challenged the tyrannical rule of Firʿawn. Whenever we face the Firʿawns of our time we must remind ourselves of the advice of our Prophet ﷺ.