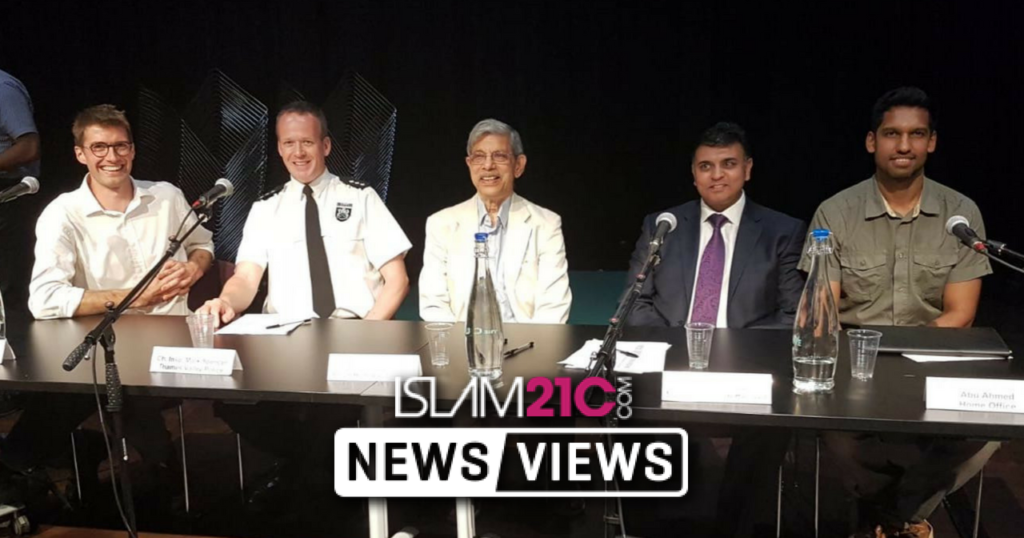 The Slough Prevent Advisory Group (SPAG) held yesterday a community event in partnership with Iqra Primary School and Slough Borough Council on the government’s controversial Prevent agenda. The event titled “Have Your Say on Prevent” hosted a number of speakers to discuss the contentious agenda and answer questions in relation to it.

The event comprised of audience members putting questions and comments to the panel, which was missing the Home Office panellist for the first half of the two-hour event. Once he did arrive, however, he was met with heckles and an audible frustration at his apparent reading of pre-prepared “answers” to criticism of the toxic Prevent policy. Frustration mounted as almost every statement or statistic Abu Ahmed gave in defence of Prevent, was corrected by the only academic and non-Prevent person on the panel, Rob Faure Walker, prompting accusations of lying and disingenuousness from the audience.

One of the audience members was Dr Tariq Yunus, a post-doctoral fellow at the British Academy based in UCL’s Psychiatry division. He told Islam21c:

“There was a lot of answer-evading, especially by the “Prevent lobby”. There was palpable anger and tension in the room that none of the Prevent people seemed to appreciate or take into account when they were answering. I thought it represented the lack of humanity behind current counter-terrorism legislation and Prevent especially. None of it dealt with the issues.”

“I think the Panel was very imbalanced with two Muslims (one from the Home Office and the local Prevent Officer) who are paid to sell and implement Prevent with the locals Chief Police Inspector supporting them; with Rob Faure Walker the sole anti Prevent voice. For me that was very, very disappointing and unacceptable. To make matters worse the Chairman did a poor job of chairing the event. There should have been an evenly balanced panel with at least one Muslim voice that was anti-Prevent from one of the well-known organisations to enable a fair and well informed and discussion.”

Prevent is one of the four stands of the government’s counter-terrorism strategy which is known as ‘Contest’. Unlike the other strands—which exist to deal with things related to actual terrorism—Prevent was created to combat “extremism”, which was defined as the opposition to “British values”. This was due to the misguided, ideologically-based belief—now rejected by the government—that something called “extremism” causes terrorism.[1] This underlying “radicalisation” theory still remains in Prevent vocabulary despite the government distancing itself from the refuted conveyor belt theory and the ERG22+ “extremism” risk factors that were once offered as justifications for the policy, before their “scientific” basis was condemned by 140 experts across the world,[2][3] off the back of a CAGE report exposing it as “pseudoscience”.[4]

Many have criticised, opposed and called for the repeal of the strategy. This ranges from the National Union of Students (NUS), Federation of Student Islamic Students (FOSIS), the University and College Union (UCU), National Union of Teachers (NUT), faith groups and activists. [9] As well as these groups, many cross-party MPs and even the Government’s own reviewer of terrorism legislation, Max Hill QC, have opposed the government’s strategy and even gone so far as saying terror laws in principle should be scrapped as they are “unnecessary”. [10]

When one considers that Muslims comprise approximately 5% of the United Kingdom,[13] and less than 5% of the perpetrators of “successful and foiled” terror plots,[14] yet are vastly overrepresented in the counter terrorism matrix—from Prevent referrals to Schedule 7 stops and searches to “terrorism” convictions—not only does this lead to unjustified fear and panic from the broader population, but contributes to the alienation and disenfranchisement of many young or mentally vulnerable Muslims. [15]

The failure of previous theories to justify Prevent (conveyor belt theory, ERG22+) has led to the language of “safeguarding” children to be adopted instead. However, as Rob Faure Walker mentioned in the panel, echoing what teachers up and down the country have been saying, Prevent being forced on schools has actively undermined safeguarding procedures in school, stifling debate (due to the compulsory duty on teachers to “report” students) and discussions that students need to get their grievances and frustrations heard.

After the event, Rob Faure Walker, told Islam21c that:

“This was quite an interesting event where the community raised their concerns—as was the name of the event, “have your say”. I didn’t get the impression that anyone was actually listened to. That’s why I pushed Abu Ahmed to take the official minutes of this meeting and ask for an official, written response from the Home Office.”

A member of SPAG, the organising group, said:

“Slough Prevent Advisory Group was formed solely for the purpose of providing the community with a platform and communication bridge to allow their voices and opinions to be acknowledged and for the authorities to fix the gaps in their policies. This was the first event of its kind and for the purpose of engagement it was very successful. The majority of the feedback received was positive irrespective of individuals being pro or anti prevent. We hope to continue building our trust with the community by facilitating more engagements and debates addressing issues with Prevent, as well as strengthening the Community from within. We truly believe that only when follow up actions are made by way of change in policies and strategies, will the community feel that their concerns have been addressed. We sincerely hope to continue our work as SPAG to improve and further tackle concerns in the community.