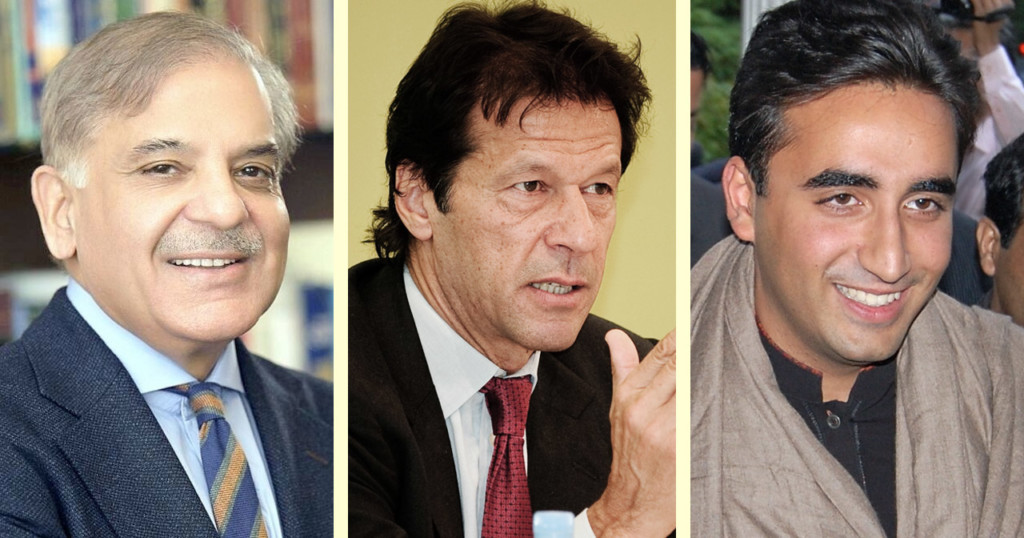 On the 25th of July Pakistan is all set to witness only its second democratic transition of power in 60-years of sovereignty, as the country goes to election with an expected turnout of 106 million voters.(1) True to form, these elections come in the wake of huge political drama unfolding over the last few months and will deliver one of the most important leadership outcomes for Pakistan since its independence in 1947.

The Story so Far

As a country, on paper, Pakistan stands as a giant amongst the Muslim world with immense potential to make its mark globally (one of only nine nuclear states; second largest Muslim population and army; abundance of natural resources, 60% young population, etc.) Despite all this it is commonly mentioned as a failing state in global geopolitical circles.

An overriding factor  that has stalled Pakistan’s progress is the toxic combination of corruption with zero accountability of its leadership, which has trickled down into most, if not all, sections of society.(2) The last 50 years have largely seen civilian governments change hands between political families as opposed to parties, namely the Bhutto-Zardari’s of the Pakistan People’s Party (PPP) and their rivals, the Sharif’s of the Pakistan Muslim League (PML–N). Multiple tenures for both of these dynasties have been marred by widespread allegations of sophisticated corruption, each learning from the other how best to conceal it, minimise paperwork and juggle swindled cash and assets through recondite accounts.

However, this has started to change. In a landmark ruling last year, the Supreme Court of Pakistan ousted Nawaz Sharif, the sitting Prime Minister and leader of the PML – N party, from office on charges of corruption related to overseas properties he had amassed illegally while in office (revealed as part of the ‘Panama Papers’ leak).(3) To top this, earlier this month anti-corruption courts slapped Sharif with a 10-year custodial prison sentence with hard labour, and an £8 million fine.(4) This was no mere gesture; he is currently serving the sentence as we speak, pending an appeal. That effectively rules a disqualified and incarcerated Nawaz Sharif out of the impending election and without their figure-head of at least three decades in charge, has significantly weakened a rudderless PML-N.

Who That Leaves Behind

The remaining options are the PPP led by Bilawal Bhutto-Zardari. The Oxford-educated young pretender is trying to follow in his late mother’s footsteps (Benazir Bhutto) by becoming the Prime Minister. However, his scripted, almost comical political performances suggest he has inherited little political nous from those before him, and by his own admission he does not want to be at the helm (proving this by at least once escaping to the UK).(5) His father, Asif Ali Zardari is widely known to be playing the obscured puppet master and pulling the party strings, hence Bilawal seems to have little choice but to comply and stay put. Regardless of this reluctant dynamic, the PPP is mired in complacency and corruption charges and is not the national force it once used to be.

That leaves the Pakistan Tehreek-e-Insaf (PTI, Movement for Justice) led by the people’s favourite, Imran Khan, a.k.a ‘Kaptaan’ (Captain) Khan. Over the last 30 years he has transitioned from the nations most revered cricketer, to philanthropist, and now politician. The politics of Imran Khan has long been seen as refreshing and honest versus all other alternatives available to the electorate. He has mobilised previously docile sections of society (quote: “only animals should be apolitical”) and caught the imagination of the youth with his vision of good governance and accountability driving social and economic justice, all overseen by a truly independent judiciary. Unlike his adversaries, he is untainted in terms of corruption allegations and is largely seen as the protagonist to unravelling Nawaz’s incrimination and subsequent prosecution. In spite of this, he has never made the cut in more than two decades of politics. What is different this time?

The Reasons for Optimism

Imran Khan and the PTI this time need only win, and he is prepared to do what it takes to get there. The politics of Pakistan has never entirely been about what you are offering as policy, but arguably even more about who you have to offer to the people. While Imran may have been saying the right things in previous elections, the PTI was widely perceived as a one-man outfit. His party was full of candidates who, although most likely competent, were political unknowns and that cost him badly at the ballot box in 2013.(6) This time round he has taken on a considerable number of defectors from other mainstream parties, who may bring with themselves the unsavoury baggage of corruption but will likely also guarantee votes and seats.(7) Naturally this has brought criticism from his own party, along with ‘purist’ PTI supporters who see it as Imran Khan compromising his principles. But the overall vote impact of this will undoubtedly be net positive, and the general notion is that once in power he will ensure zero-tolerance to corruption especially throughout his ranks, so all is directionally in order.

Similarly, he has been demonstrating ideological malleability by swaying between liberal and conservative political stances to win favour on both sides. While holding a leftist position on many national issues, last week he vowed to protect Pakistan’s much scrutinised blasphemy laws in their current form, in a move seen to appease the religious right and win their backing.(8) He has also strategically kept Jamaat-e-Islami, PTI’s religious coalition partner in the Khyber Pakhtoon Khawa province (KPK), onside by observing leniency in allowing them to implement their conservative agenda, e.g. removal of pictures in textbooks of women without a veil, amongst other measures.

From a foreign policy perspective, he is aligned with the masses. As a harsh critic of America’s war in Afghanistan and Pakistan’s tribal areas, he actively speaks out against drone strikes on Pakistani soil and civilian deaths, pledging to take back access from American troops once in power and restore damage to the nations sovereignty.(9) Similarly, he is not seen as a leader who will schmooze neighbouring India’s much despised Prime Minister Narendra Modi, a move which also contributed to Nawaz’s downfall.

From a results and delivery perspective, Imran Khan now has something tangible to present to the nation versus previous campaigns. After forming his government in the KPK province post the 2013 elections, he has delivered (or is on the way to delivering) on two of his main election pledges; a clean government and transformation of hospitals and schools.(10) Corruption and nepotism are markedly lower amongst government officials and institutions (police). Trust is building in government educational institutions with the same standards increasingly being offered to all social classes. Roughly 100,000 students have moved from private to public education, and as for health, the number of available doctors per person is on the rise. Hence, while untested on a national scale, PTI have certainly made headway on a provincial level.

Perhaps most crucially, there are widespread claims that the establishment, a.k.a. the army and security services are backing Imran Khan after their recent fallout with Nawaz Sharif and the PML-N.(11) Allegations are being made in some quarters of largescale army-led media censorship and intimidation in favour of PTI. Imran Khan, of course denies this and emphasises his independence from the Army. However, if there is any truth in the accusations, either intentionally or inadvertently, this could easily be a defining factor on who gets into power as we have seen in previous elections.

Hence with the competition well and truly side-lined and PTI growing in strength, the election might almost be seen as a formality before Imran Khan forms his first majority government.

Anyone who knows the history of Pakistani politics can tell you the result is anything but a done deal. For starters, Imran Khan’s PTI has to generate a colossal vote swing to attain a majority. They are currently sitting on 32 seats and require 137 out of the 342 available to form a simple majority. That equates to a 400% increase on current numbers. This will not be helped by the dynastical nature of Pakistan’s politics and voting patterns. Regardless of political performance or competence, people often vote for whom their forefathers have historically supported, either due to localised coercion or simply blind loyalty. This is also what thwarted the ‘Tsunami of Change’ that Imran Khan had promised in the 2013 election, as he achieved markedly less seats than polls suggested. Despite onboarding ‘turncoats’ from other parties to mitigate this, he may still be left short.

From a results perspective, while the aforementioned progress has been made in KPK under his leadership, there is also a feeling of over-promising and under-delivering. Khan himself is accused of neglecting matters of his mandated province (KPK) due to his fixation on disrupting the central government and constant eye on the ultimate prize (somewhat justified now with the ousting and conviction of Sharif). Questions are being raised around whether he would really be able to deliver on his bold manifesto at the national level or if he would become distracted once more.

Lastly, and probably most insignificantly, there are the traditionalists who just cannot get over Imran Khan’s personal life, which by his own admission has not been perfect in the past. Couple that with colourful allegations made against him by his ex-wife Reham Khan in a recently published ‘tell-all’ book and it only makes matters worse.(12) The majority of people can see through this issue as peripheral and know that it is only pushed out for political points scoring by the opposition who themselves need to introspect. As one commentator said, if it was a genuine requirement for every Pakistani politician to be ‘honest and sincere’ as per the constitution, then the National Assembly would be permanently empty.(13)

Where Does that Leave Us?

When all is said and done, things are still looking up for PTI. While a majority government looks unlikely, polls are suggesting a hung parliament to be the most realistic outcome, with the largest number of seats going to PTI and Imran Khan becoming the Prime Minister. If that happens, and he stays true to his word, then this could truly spell an era of new politics in Pakistan which will drag the country in the right direction, and indeed would be beneficial for the larger Muslim world. The electorate once again have an opportunity to make a change for the better as opposed to recycling the same old failed options, but it is yet to be seen if they will take it. Khan is a promising option who, in theory, offers tangible solutions to Pakistan’s longstanding problems both domestically and internationally. But there seems a long journey before we discover whether he will be given the mandate to put these into practice. Victory in the election is not a foregone conclusion for PTI, but if the polls are to be believed, then this time it finally might just be the Captain’s turn to come in and bat.