I was wrong; the government’s definition of ‘Extremism’ is genius 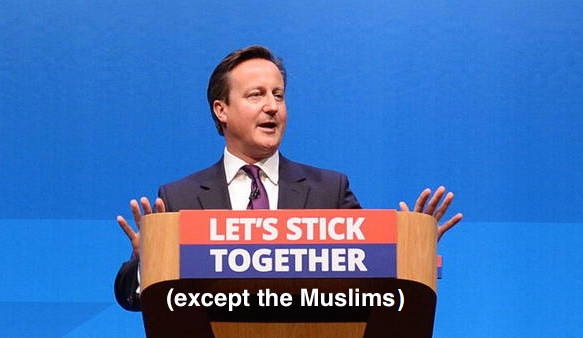 Reflections on yet another Counter-Extremism Strategy – Part 1

The government’s new Counter-Extremism Strategy[1] released in a report yesterday has already provoked a barrage of criticism and ridicule. Again. As expected, numerous rational people have been criticising not only its paradoxical and draconian nature, but the increasingly embarrassing lack of any cogent definition of ‘Extremism’ that the entire thing really depends on.

“Do such mosques really exist and by whose definition are they deemed to be extremist? We cannot help but also detect the McCarthyist undertones in the proposal to create blacklists and exclude and ban people deemed to be extremist. If we are to have such lists at all, they should be determined through a transparent process and subject to judicial oversight…”[2]

Many other Muslim organisations slammed the “counter-productive” strategy “based on flawed analysis”,[3] including one scathing attack accusing the PM of treating Muslims as “aliens to be bashed from time to time for political gains.”[4]

The criticisms are now not only from the grassroots Muslim community and general public, but—encouragingly—even from within the security establishment itself. Greater Manchester Police chief constable Sir Peter Fahy, who speaks for the police on the government’s failed PREVENT strategy, told the Guardian:

He added that there is a danger that the plan would turn officers into “thought police”, and another Greater Manchester Police chief slated the government’s damaging strategy: “I’m not sure [this has] been thought through at all.”

Even the normally servile broadcasters and journalists have felt the need to question and challenge the Home Secretary Theresa May, who apparently drew the short straw and had to defend the indefensible.[6] Many interviewers trying to tie down government representatives to give an actual definition of ‘extremist’ consistently failed to get a straight answer as they continually skilfully got out of answering with the useful appeals to fear and menacing references to ISIS.

Indeed we have criticised and ridiculed the government’s irrational, self-contradictory and counterproductive approach to so-called “extremism” for literally years,[7][8][9] but I think we might have made a mistake. The government’s incompetent attempt at a definition for ‘extremist’—upon which obviously their entire strategy depends—may actually be a stroke of genius.

The reason nobody is properly defining ‘extremism’, is because it does not matter. The target of ridicule itself, the government’s so-called ‘definition’ of extremism, is as:

“Extremism is the vocal or active opposition to our fundamental values, including democracy, the rule of law, individual liberty and the mutual respect and tolerance of different faiths and beliefs. We also regard calls for the death of members of our armed forces as extremist.”[10]

The almost criminal genius of this definition is that it is just about scary enough to frighten the ignorant to part with their liberties, whilst being just about vague and malleable enough to apply to literally anyone.

As a friend who had received PREVENT training at his workplace had told me once the penny dropped and he realised the reality behind what he initially thought of as harmless safeguarding training: they do not tell you exactly what you are supposed to be preventing. When you are not told what you are supposed to look for exactly, you will look for anything. And that is far more useful for those in power; a heightened state of fear, suspicion and widespread surveillance. Big brother style. Perhaps it is just a coincidence that the Snoopers’ Charter is being revived, to give the security services even more of the power they need to “protect us.”[11]

Throughout the 39-page report, the reader is treated to the words extreme/extremist/extremism an impressive 324 times. Any curiosity that arises in the reader at the repeated use of the word without guidance to interpret who or what exactly it refers to, is swiftly dealt with by a well-timed mention of ISIS or some kind of violence. The fear and false vividness then takes care of the annoying voice of reason that asks such awkward questions.

There is an impressive diversity of fiery rhetoric and sensationalist scaremongering throughout the report, warning us of the “destructive consequences” of “terrorism and murderous hate crime attacks”, with copious quotes from some apparently unsavoury characters that want to strike “terror into the hearts of the kufaar.” The unsuspecting reader is inadvertently given an impression of what an “extremist” actually is.

Then comes a barrage of disparate, cherry-picked anecdotes featuring “extremists” who have absolutely nothing to do with the above, “taking over” our schools, charities, universities, and so on. Voila, the perfect formula. Sandwiched between vivid descriptions of violent ISIS psychopathy, are handy statistics, like 70 so-called “extremist” events happening last year in UK universities. Naturally, the reader should agree they must be banned, their rights taken away, their voices silenced and their Amazon shopping lists spied on.

Never mind that those secret statistics bear an uncanny resemblance to a scaremongering report by a disgraced neocon thinktank, as has been pointed out.[12][13] Never mind that most of those so-called “extremists” that have been named happen to be mainstream Muslim speakers and activists, who incidentally are some of the most vocal in opposing ISIS privately and publicly. Never mind that the word “extremist” here—instead of ISIS or anything violent—now appears to refer merely to religious piety and conservatism.

None of that matters, as they all now share the special title of “extremist”, no need for facts that get in the way of the state increasing its power. That is the genius behind the incompetence.