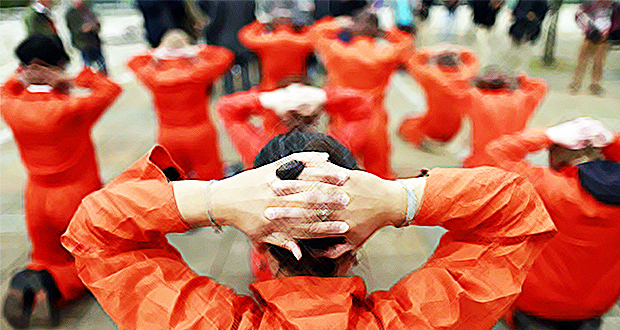 On Monday 3 August, the BBC’s flagship current affairs programme Panorama broadcast Panorama: Fighting Terror with Torture.[1] The documentary looked at the CIA’s torture programme used on detainees during the War on Terror. I watched the programme because it is an area of interest which I developed during my years at university. However, I was appalled by what had just been broadcast and watched it a second time, this time with a notepad and pen in hand.

Why was I appalled? Well, the programme highlights the torture of Mohammad El-Shari’ya, Khalid Sheikh Mohammad and Abu Zubaydah at the hands of the CIA. Rather than inform the audience about the wrongfulness of the atrocities that had been committed on these individuals, the debate was framed around the efficacy and value of torture. The illegality of torture was never explained to the audience in clear terms. I am sure the BBC, and the producers of the Panorama piece agree that torture is illegal and would have no reservations in highlighting their disgust at the practice and justification of its use. However, during this piece they did not.

Torture is illegal in any and all circumstances. Torture has been made illegal in international law;[2] in various regional treaties,[3] the laws of war[4] and transnational treaties.[5] The prohibition on torture can never be derogated from; it is an absolute right and this prohibition is codified in such terms. For example, Article 7 of the International Covenant for Civil and Political Rights states “No one shall be subjected to torture or to inhuman or degrading treatment or punishment.”

The presenter explains that the torture programme was the “cornerstone of America’s War on Terror during the Bush years” and was developed in the aftermath of 9/11 which she described as “the most lethal terror attack in history has been committed right in the heart of America” and that “fearing another attack, Washington wanted a new interrogation model to break the fanatics.”

The logical inference that an audience member could conclude is that America had no choice but to develop and use abhorrent and egregious interrogation methods, because they had to stop an event like 9/11 happening again. The UN Convention against Torture[6] provides a framework on the abolition of torture as it outlines a state’s obligations. Article 2 (1) of CAT states there are “no exceptional circumstances whatsoever, whether a state of war or a threat or war, internal political instability or any other public emergency, may be invoked as a justification for torture.”[7] This was never explained to the audience.

As George Orwell wrote “Political language has to consist largely of euphemism, question-begging and sheer cloudy vagueness. Defenseless villages are bombarded from the air, the inhabitants driven out into the countryside, the cattle machine-gunned, the huts set on fire with incendiary bullets: this is called pacification […] Such phraseology is needed if one wants to name things without calling up mental pictures of them.”[8]

Euphemisms are used to veil the truth of what something is. Torture illustrates the brutality of what America and her allies did to detainees, the term is an honest and merciless depiction of what actually happened. Enhanced interrogation on the other hand seeks to cloak the unpalatable truth and the callousness of the techniques used, because torture is illegal by any and all norms in international society.

Alvin Bernard Krongard, the CIA’s executive director from 2001 to 2004 was interviewed for the documentary and was asked if he thought waterboarding and putting a detainee in painful stress positions amounted to torture. He replies “So I assume for, without getting into semantics, that’s torture. I’m comfortable with saying that.” He says “we had to do something.” Again, he reiterates that America had no choice but to use torture in the aftermath of 9/11.

At this point of the documentary, the presenter could have said that regardless of the circumstances, torture can never be justified. Yet, they did not. Additionally, could you imagine if a state official from another country defended the use of torture in such a brazen manner what the reaction would be? There would be an outcry by large sections of the public and media for accountability of the perpetrators and architects of the use of torture.

In December 2014, the Senate Intelligence Committee released their Committee Study of the Central Intelligence Agency’s Detention and Interrogation Programme, colloquially known as the “The CIA Torture Report”. While there have been admissions of the use of torture, no-one has been brought to account. However, CAT obligates states to prosecute crimes of torture. If countries sincerely believe that torture is wrong, they would seek to hold to account those that designed the CIA’s programme of torture, the people who used the methods on detainees and the people in power who sanctioned its use.

And what of Britain’s role in torture? Mr. Kongrad was asked whether British intelligence knew torture was going to be used in interrogations. He comments “It’s hard for me to think that they didn’t, they’re professional intelligence people, I mean obviously.” The Foreign Office was requested by Panorama to take part in the programme, which they refused. Instead they provided a comment where they said “we stand firmly against torture and cruel, inhuman and degrading treatment or punishment. We do not condone nor do we ask others to do it on our behalf.”

The words of the Foreign Office are a hollow inanity, because the reality is, the UK has been complicit in torture. The brilliant investigation conducted by advocacy group CAGE of the UK’s collusion with the Americans concerning torture highlights the nature of the UK’s involvement in this “special relationship.”[9]

The presenter asks the question “Was it necessary to torture?” and “It is an uncomfortable truth that the torture programme did reveal a large web of detail, but was it worth it?” The answers to these questions are irrelevant. Instead, I proffer a different question, would the British and American government and the audience watching the programme tolerate the use of such interrogation techniques on their military service personnel and defend such methods as legitimate?

[5] Convention against Torture and Other Cruel, Inhuman or Degrading Treatment of Punishment [1984]