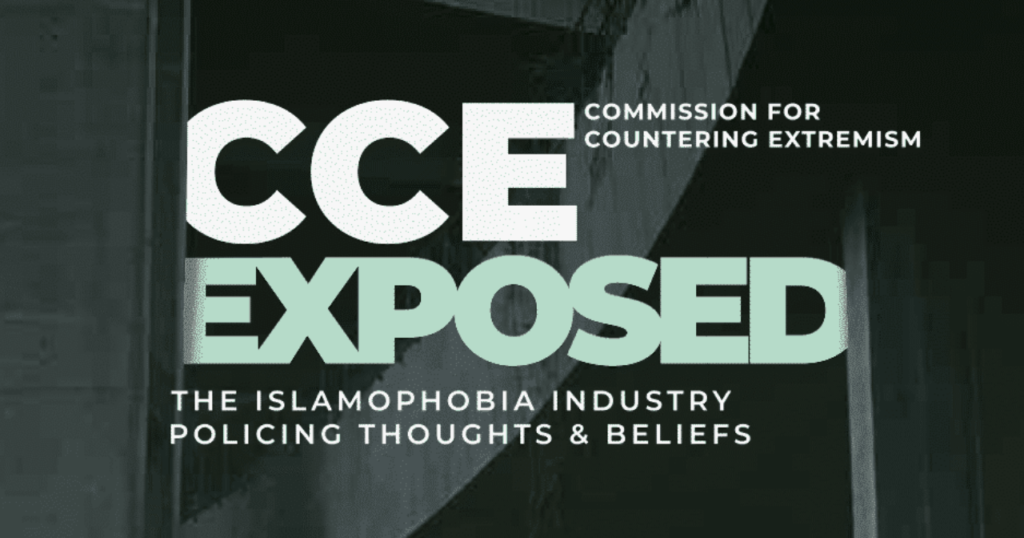 Advocacy group CAGE have today revealed details of the networks and organisations that have engrained themselves within the Commission for Countering Extremism (CCE).

CAGE has published a detailed report entitled ‘The CCE Exposed’ where it presents evidence of those networks that are closely tied to the global industry of Islamophobia.

The report critically analyses the theoretical foundations of the CCE and how the latter has damaging effects and consequences on the freedom of speech, academic freedom and importantly the beliefs of Muslims.

The in-depth analysis reveals the close links between “experts” within the CCE and the Islamophobic Henry Jackson Society, the Tony Blair Institute for Global Change and the Quilliam Foundation.

The neoconservative think tank, Henry Jackson Society (HJS) is well known for writing reports attacking Muslim activists, in particular those campaigning against Islamophobia and for wider public participation of Muslims in the UK. [1]

It is funded by far right organisations and individuals from overseas, such as Nina Rosenwald, dubbed “the sugar mama of anti-Muslim hate”, [2] and its Associate Director, Douglas Murray regularly praises far right Islamophobes, including Robert Spencer and Geert Wilders. [3]

The HJS’s routine attacks on Muslim organisations are thought to be a result of the likes of Murray’s expressed desire that “Conditions for Muslims in Europe must be made harder across the board.” [4] It has, as a result, little credibility outside of Islamophobic circles, with even Theresa May’s cabinet members “scrambling” to disassociate with them. [5] Their reports attacking Muslim speakers have little credibility and have often provoked widespread ridicule being turned into a “Premier League” table of Muslim speakers most hated by Islamophobes. [6]

These latest revelations presenting the relationship between the “experts” in the CCE and the Islamophobic organisations and think tanks has raised many questions regarding the long-term impact on the freedom of speech, academic freedom and the value of individual beliefs and privacy.

“We are proud to have produced this report which unravels the CCE from the roots up in detail. It is a crucial resource for all civil society groups, and a cause to support our calls to boycott the CCE.”

“What is particularly striking about the members of the so-called Expert Group is their disturbing links to the security industry, their neo-conservative funding sources as well as their clear anti-Muslim bias.”

Qureshi also said that many of these experts have a lot to gain politically and that there is significant evidence that the CCE is “utterly disingenuous and only seeks to bolster state rhetoric around the War on Terror and Prevent”.

The report, according to CAGE, will also be of great importance to other segments of civil society such as human rights organisations, charities and activist groups whom the state may deem extreme for having a narrative that would be different to that of the state’s.

The CCE was introduced in the Conservative party’s manifesto during the 2017 general election and announced that its aim was to “identify examples of extremism and expose them, to support the public sector and civil society, and help the government to identify policies to defeat extremism and promote pluralistic values”. [7]

In January 2018, Sara Khan was appointed the lead commissioner of the CCE and the Commission was formally established in March the same year.

Khan is a divisive figure among the Muslim community and is seen by many as a mouth piece for the government as she has previously supported and promoted the flawed, unpopular and toxic Prevent programme. [8]

Khan’s Inspire was implicated in a report published by CAGE in 2016 which revealed that a secretive government department called the Research, Information and Communication Unit (RICU) had been creating a network of supposed “grass-roots” Muslim voices to promote “counter-narratives” on behalf of the UK government, without any public debate or oversight. [9]

The Commission has long been seen as an alternative plan to the Extremism Bill that the government has been failing for many years to pass through parliament as it struggled to give a definitive definition of extremism. [10]

In August 2018, a number of academics including Rob Faure Walker (University College London and PREVENT Digest) launched a joint statement expressing their concern with the Commission for Countering Extremism.