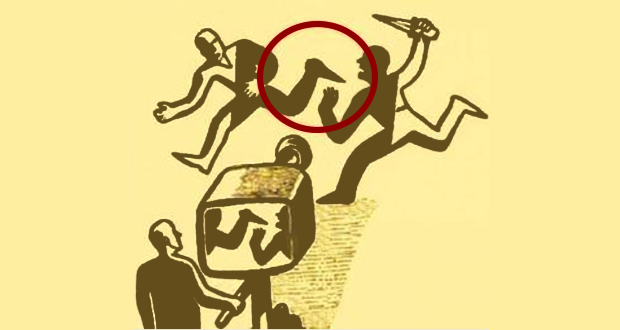 Alleged Denial of ‘Jewish Links’- Only a Media Spin!

The UNESCO Resolution on “Occupied Palestine” was endorsed recently by its Executive Board which comprised of representatives from 58 states. It was approved by 24 votes to 6, with 26 abstentions and two absentees. And, already, it has raised a hornet’s nest. The UK was among those countries which voted against. The situation stems from a well-orchestrated Zionist media spin which misrepresented the very purpose of this Resolution and has been painted misleadingly by several news outlets over the past weeks. The issue is that UNESCO has allegedly given short shrift to the Temple Mount, the most holy site in Jerusalem, and has denied that the Temple Mount was ever the home of Jewish temples. An unwary world was therefore misled to believe that the crux of the Resolution was to deny Jewish ties to this historic site – which was far from the truth.

A cursory glance at the results of a Google search on this subject will prove this contention. The Guardian UK, for example, even changed the headline of one of its articles on the subject from ‘Israeli Anger at UNESCO Motion condemning ‘aggressions’ at Holy Site’ to ‘Israeli Anger at UNESCO Motion’s Failure to Link Holy Site to Judaism.’ However, any rational and objective reading of the Resolution will indicate that the version rolled out by the biased media was not exactly the case.

Undeniably, Temple Mount is equally as important to the Jews as it is to the Muslims and Christians. As a matter of fact, denying Jewish rights to the place is also disrespectful to the clear meaning of the Qur’ān itself. Nowhere in the UNESCO Resolution is there any statement invalidating or denying the Jewish connection to Temple Mount. In fact, the Jewish connection is not discussed in any way, either positively or negatively. It was not mentioned because the Resolution was about Israeli damage to a Muslim holy site – Al-Aqsa Mosque. There is no general assessment or rejection of any religion’s connection to the site; rather, the Resolution affirmed “the importance of the Old City of Jerusalem and its Walls for the three monotheistic religions.”

However, when writing the Resolution, the Board seems to have referred to the Mount only by its Islamic name “Al-Haram al-Sharif” and not the words “Temple Mount”. PM Netanyahu produced the spin and Israeli journalists of all stripes were eager to spread it. This news was then parroted without due verification by global media outlets. The main focus of the Resolution, on closer inspection, was clearly very different. The entire media discussion focused on something UNESCO has no power to do. It does not have any power to nullify the Jewish connection to Jerusalem or any holy site, even if it wanted to. The real-world power to shape the status quo in Jerusalem rests solely in the hands of Israel, not UNESCO. It is what Israel does with said power that we should be focusing on. Besides, this Resolution was only a further affirmation of an earlier similar Resolution adopted in April 2016, over which the UK cast an abstention vote along with the US.

The Resolution clearly notes that Israel is violating Muslims’ freedom of worship by hindering and preventing their access to the Aqsa Mosque. It states that it “deplores the continuous storming” of the mosque compound by Israeli right-wing extremists and uniformed forces; decries arrests and injuries of Muslim worshippers in the mosque; and

“[r]egrets the damage caused by the Israeli forces, especially since 23 August 2015, to the historic gates and windows of the al-Qibli Mosque inside Al-Aqṣa Mosque/Al-Ḥaram Al-Sharif, and reaffirms, in this regard, the obligation of Israel as an “occupying power,” to respect the integrity, authenticity and cultural heritage of Al-Aqṣa Mosque/Al-Ḥaram Al-Sharif, as reflected in the historic status quo, as a Muslim holy site of worship and as an integral part of a world cultural heritage site.”

The Israeli paper, Haaretz report, also assumed the Resolution made reference to the Western Wall when it only discusses the “Western Wall Plaza”, which was built in 1967 by cleansing the residents of what had been the Mughrabi Quarter for almost eight centuries.

The prevailing status quo has been that the site of the Dome of the Rock and Al-Aqsa Mosque is officially under Muslim administration and under Israeli law. While Jews are allowed to enter the site, their worship there is banned under arrangements instituted by Israel when it captured the area from Jordan in 1967. Since that time, many illegal Israeli settlements have sprung up in the West Bank and Jewish neighbourhoods have appeared in East Jerusalem (an area previously predominantly inhabited by Muslims) under orchestration by the Israeli Government. There has thus been a surge in private settlement activity in the heart of occupied East Jerusalem. For example, new data shows that the number of Jewish settlers in the area surrounding the al-Aqsa compound has increased by 70 percent since 2009. During that same time period, 60 Palestinian families have been evicted; 55 of them in the last two years alone, according to the Israeli NGO ‘Ir -Amim’.

In a parallel universe, the Israeli PM could have promised to do more to uphold Muslims’ freedom of worship and to reassure the Muslim world that Israel is not trying to damage the mosque. Those are real and important issues. It is, therefore, regrettable that the Israeli diplomatic ploy to shift the focus from its illegal actions “to issues irrelevant to the content and objectives of the Resolution, which aims to put an end to Israel’s dangerous and illegal actions against holy sites in Jerusalem” has been allowed to prevail.

Is there a moral to this story? Perhaps the lesson is that we have a choice. We really need not click on a link that helps propagate media spins of this nature. They are usually designed to draw attention away from the real, physical harm and issues that the Occupation is causing.