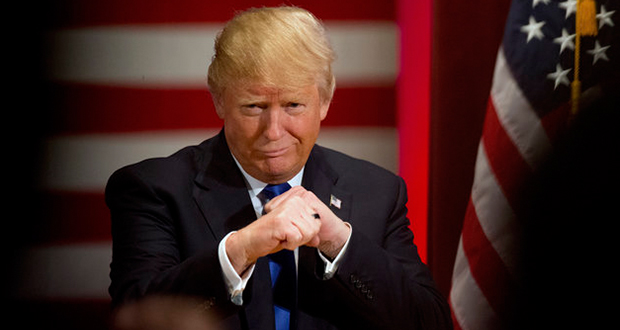 Hours before President Trump enforces a Muslim ban and hours after he ordered federal agents to start building the wall along the Mexican border, Muslim leaders held an emergency rally to protest the executive orders.

In Washington Square Park, hundreds of people held signs, with “No human is illegal” and “Every Muslim I’ve ever known is a better American than Donald Trump”. At least five helicopters swirled overhead, and hundreds of cell phones, lit up, created a white wall opposite the iconic arch in the park.

“No bans, no walls, this is our New York!” they shouted.

The march was organised with just a few hours’ notice by the Council on American-Islamic Relations. CAIR’s national executive director, Nihad Awad, said the executive orders were a “disturbing confirmation of Islamophobic and un-American policy proposals made during the presidential election campaign.”

“This ban does not make our country safer. Instead, it serves to stigmatizes Muslim refugees and the entire American Muslim community,” he said.

“It will hand a propaganda tool to our enemies who promote the false narrative of an American war on Islam.”

New York is one of several cities in the US that has pledged not to cooperate with federal immigration officials and has vowed to remain a sanctuary city. Mr Trump has promised to scrap federal funding for sanctuary cities, putting thousands of immigrant families at risk.

Around 40 per cent of New York City’s population is foreign born.

City controller Scott Stringer estimated that the President could risk $7 billion that the city relies on from the federal government.

Most of that money goes to the police’s counterterrorism efforts and welfare services such as child protection, affordable housing and HIV/AIDS prevention.

“This city is and always will be a sanctuary city,” said Mr Stringer at the rally.

Within hours of Mr Trump’s executive order, Steven Choi, executive director of the New York Immigration Coalition, said that the orders were an “affront to America’s basic values of dignity, liberty and justice”.

“He has made a clear choice to turn the hateful rhetoric of his campaign into action, taking directives straight from the anti-immigrant playbook,” he said.

At the back of the crowds, two friends of Iranian-Indian and Afghan background were huddling against the cold and holding up signs. They came to New York when they were three years old.

“Symbols matter,” said Kayhar, who did not want to give her last name. “We are here, we are visible, we are not going away.”