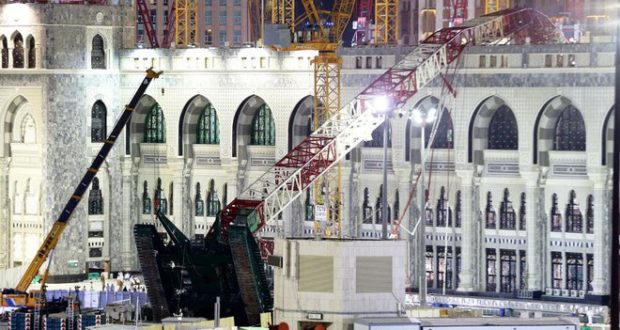 Makkah Criminal Court on Thursday said it was dropping the case of the crane that collapsed in Makkah in September 2015 due to lack of jurisdiction over the case.

The accident resulted in 110 deaths and 209 injuries.

The court issued its ruling in the presence of the defendants on trial and the prosecutor; it came after several sessions of deliberations.

The prosecutor interrogated the defendants before the judge decided to drop the case due to an issue of jurisdiction.

The court informed the defense team of the 13 people on trial, consisting of Ahmed Al-Qurashi, Attorney Hassan Jomaan Al-Zahrani and Abdullah Bin Laden, that it will inform them later of the date the legal decision will be formally issued.

Reports presented by the Bin Laden Group during the investigation and court sessions had shown that sudden changes in weather conditions, difficult to forecast, resulted in unusual winds, which in turn caused the collapse of the crane.

The company made a point of mentioning the fact that 50 thunderbolts were recorded on the day in Makkah within a period of only one hour due to the inclement weather conditions.

The storm was accompanied by heavy rain and thunder, as well as drop in temperature from 45 degrees to 21 degrees Celsius, the company said.

The Civil Defense Department spokesman said that the heavy rain that fell over Makkah on that day reached 40 millimeters within a very short period of time.

The 13 defendants on trial gave their affidavits to the court. They were absolved of responsibility for the collapse of the crane and the consequent damage due to insufficient evidence.

Of the three judges, two decided to drop the case; the third maintained that the court has jurisdiction over the case.

The prosecutor also insisted that the court had jurisdiction and legal competency to look into the case, based on the royal decree issued following the incident, including into charges of loss of life, property damage and negligence.

The Bureau of Investigation and Public Prosecution relied on the results of the investigation, which were submitted to higher authorities, and indicated that the main cause of the accident was the fact that the crane was subjected to heavy winds and had been kept idle in the wrong position, in violation of the operation instructions issued by the manufacturer.

According to the instructions, the crane’s main arm should have been lowered when not in use or during instances of heavy winds.

The bureau also pointed to the lack of compliance with safety standards in the operating procedures, no respect for the safety requirements, and poor communication and monitoring by safety officials responsible for the project during the poor weather conditions, despite warnings by the Presidency of Meteorology and Environmental Protection.

The defendants were also accused of failing to measure the speed of the wind and to respond to a number of letters from concerned authorities to review the condition of the several cranes at the site, especially the crane that fell.

The bureau called for holding the contractor, Saudi Bin Laden Group, partially responsibility for the accident, due to these reasons, as well as for reexamining the contract of Kansas Advisory Company and all cranes involved in the project, and to make sure that all safety and security conditions are met.