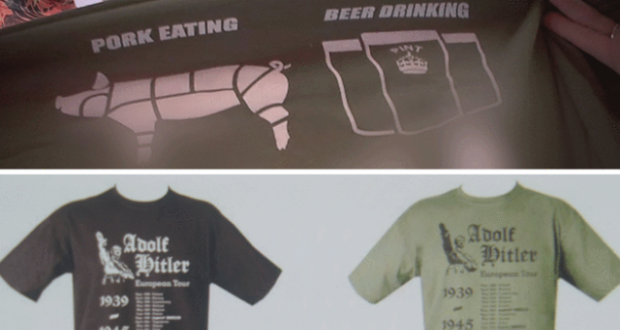 Whilst the charity commission has had its spotlight disproportionately on Muslim charities, a military charity has been selling Nazi anti-Islamic T-shirts to raise funds.

An undercover investigation by BBC Scotland has discovered a military charity is selling anti-Islamic and Nazi-themed clothing to raise funds.

It is registered with the Charity Commission and has signed up to the industry Code of Fundraising Practice.

1st Knight told the BBC it had now withdrawn the merchandise from sale.

In a statement, the charity said it should not have been selling this type of merchandise and was grateful for the BBC’s intervention.

1st Knight raises funds through selling prize draw tickets across Scotland and the rest of the UK, as well as selling military-style merchandise from its headquarters in Blackpool, which also doubles as the charity’s shop.

In a documentary, The Great Military Charity Scandal, to be broadcast on Tuesday, volunteers for the charity can be seen mocking Muslims and some Islamic beliefs.

Caught on secret camera, the founder of 1st Knight Military Charity, Andy Linihan, was selling a Velcro badge which is designed to be placed on uniforms or baseball caps. Underneath the picture of an assault rifle were the words “72 Virgins Express”.

When asked by an undercover journalist what it meant, Mr Linihan told her it referred to the shooting of suicide bombers.

He said: “When they supposedly go up to heaven or wherever they go to, there are 72 virgins waiting for them.”

A volunteer for the charity then told the BBC investigator: “We shoot them and they get the virgins.”

Anti-Islamic themed clothing was also being sold by the military charity. One T-shirt had a picture of two naked women, a pint of beer and a pig. It read: ‘Pork-eating, beer-drinking, womanising infidel’.

Some of them were emblazoned with neo-Nazi emblems. One – the skull and bones emblem – is also used by the far-right groups Combat 18 and Blood and Honour.

All the money raised from the sales of this merchandise has gone directly to the military charity.

After seeing examples of the merchandise, he said: “That is not respectful and ethical fundraising. We would not expect a professional fundraiser to engage in that sort of thing and would certainly be ready to investigate.”

They were caught on camera claiming they were unpaid volunteers and telling members of the public that 100% of public donations would go to helping veterans.

However, Support the Heroes confirmed in a statement to the BBC that their fundraisers were paid commission. They said it would be wrong for them to tell the public that all the donations went on helping ex-forces, when fundraiser commission, payments to a management company and running costs still had to be deducted.