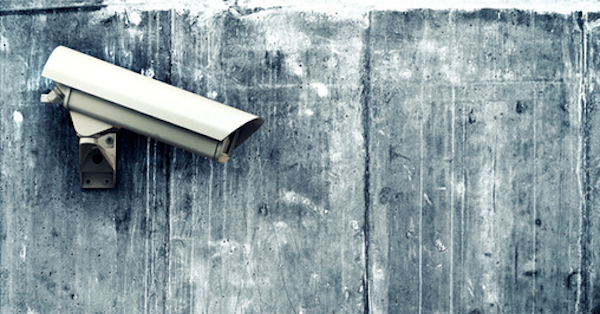 WHILE MOST EYES ARE FOCUSED on the presidential race between Hillary Clinton and Donald Trump, three major events prove how widespread, and dangerous, mass surveillance has become in the west. Standing alone, each event highlights exactly the severe threats which motivated Edward Snowden to blow his whistle; taken together, they constitute full-scale vindication of everything he’s done.

Earlier this month, a special British court that rules on secret spying activities issued an emphatic denunciation of the nation’s domestic mass surveillance programs. The court found that “British security agencies have secretly and unlawfully collected massive volumes of confidential personal data, including financial information, on citizens for more than a decade.” Those agencies, the court found, “operated an illegal regime to collect vast amounts of communications data, tracking individual phone and web use and other confidential personal information, without adequate safeguards or supervision for 17 years.”

On Thursday, an even more scathing condemnation of mass surveillance was issued by the Federal Court of Canada. The ruling “faulted Canada’s domestic spy agency for unlawfully retaining data and for not being truthful with judges who authorize its intelligence programs.” Most remarkable was that these domestic, mass surveillance activities were not only illegal, but completely unknown to virtually the entire population in Canadian democracy, even though their scope has indescribable implications for core liberties: “the centre in question appears to be the Canadian Security Intelligence Service’s equivalent of a crystal ball – a place where intelligence analysts attempt to deduce future threats by examining, and re-examining, volumes of data.” 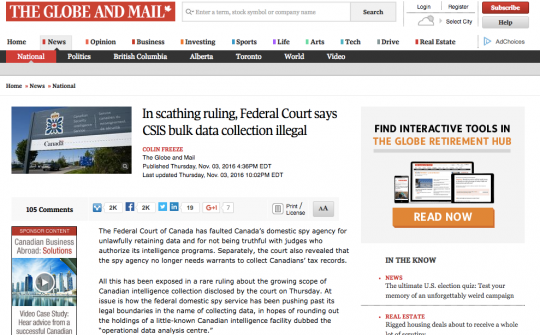 The third scandal also comes from Canada – a critical partner in the Five Eyes spying alliance along with the U.S. and UK – where law enforcement officials in Montreal are now defending “a highly controversial decision to spy on a La Presse columnist [Patrick Lagacé] by tracking his cellphone calls and texts and monitoring his whereabouts as part of a necessary internal police investigation.” The targeted journalist, Lagacé, had enraged police officials by investigating their abusive conduct, and they then used surveillance technology to track his calls and movements to unearth the identity of his sources. Just as that scandal was exploding, it went, in the words of the Montreal Gazette, “from bad to worse” as the ensuing scrutiny revealed that police had actually “tracked the calls and movements of six journalists that year after news reports based on leaks revealed Michel Arsenault, then president of Quebec’s largest labour federation, had his phone tapped.”

Speaking this week at Montreal’s McGill University, Snowden called for the resignation of Montreal’s police chief and denounced the spying as a “radical attack on the operations of the free press.” Canadian Prime Minister Justin Trudeau said “obviously I think that the troubling stories – troubling for all Canadians – coming out of Québec,” adding: “we must and can continue to ensure protection of the press and their rights.” The Canadian Journalists for Free Expression’s Tom Henheffer made the key point – about this specific abuse but also mass surveillance systems generally:

You can’t even make the argument that this is just a few bad apples because it was authorised by a justice of the peace. This is the system as it’s supposed to work. Which just goes to show that the whole system is broken.

So just this month alone, two key members of the Five Eyes alliance have been found by courts and formal investigations to be engaged in mass surveillance that was both illegal and pervasive, as well as, in the case of Canada, abusing surveillance powers to track journalists to uncover their sources. When Snowden first spoke publicly, these were exactly the abuses and crimes he insisted were being committed by the mass surveillance regime these nations had secretly erected and installed, claims which were vehemently denied by the officials in charge of those systems.

Yet with each new investigation and judicial inquiry, and as more evidence is unearthed, Snowden’s core claims are increasingly vindicated. Western officials are indeed addicted to unaccountable, secretive, abusive systems of mass surveillance used against their own citizens and foreigners alike, and the more those systems take root, the more core liberties are eroded.