“Please keep your American flags off my hijab” 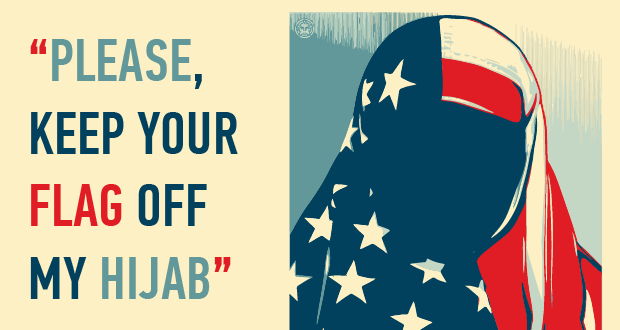 Preface: To be honest with you, I was having trouble putting this piece into words just because I haven’t been able to sit with my thoughts since the inauguration. Everything seems to have hit me at once and I’m still working through processing the madness.
So please bear with me through this mess of jumbled thoughts.

From all the photos these past few days filling our social media feeds of white people with red hats and white women with pink beanies with ears (p.s. don’t forget more white women voted for Trump than any other racial group), people holding signs of cheetos, and enough pro-Hillary slogans to make this Muslim woman of color uncomfortable, there was one particularly striking image that was consistently shared and re-shared and praised by the “left.”

The American-flag-clad Hijabi woman illustrated in the trademark style of of Obama’s “hope” poster is not short of striking.

But maybe not for the right reasons.

As this is a fashion blog of sorts, let’s dissect this #ootd.

Never forget that fashion is inherently and deeply political, that symbols are infinitely meaningful, and that harm can occur through both.

How are we able to hold up signs of Muslim women wearing the American flag and chant slogans of supposed solidarity while drones carrying the same flag killed our Muslim family in Yemen at the exact same moment and we said nothing?

While the women’s march was making history, the new administration was already repeating it.

Did you even know that Trump has already administered drone strikes? Of course not.

You were not supposed to know.

You are only supposed to hold our silent faces wrapped in the cloth that has suffocated our voices. Anyway, it’s more peaceful that way, isn’t it?

Next time you are thinking about sharing this image, wheat-pasting it on an old wall, saving it as your desktop background, or waving it above your head and pledging your solidarity:

1. Know that a hijab-wearing Muslim woman did not make this image. Actually, a woman didn’t make this image at all. It was created by a white man: Shepard Fairey, artist & founder of the clothing brand OBEY, created this image from a photograph taken by Muslim-American photographer Ridwan Adhami. Were we unable to uplift the work of Muslim women instead? Are our images only able to be consumed when they are white-washed and sanitized?

2. Know that the hijab–for *me* at least–represents a rejection of materialism, of capitalism, of euro-centric beauty standards (among other significance) and draping an American flag over it erases almost everything the hijab means to me.

3. Know the American flag represents oppression, torture, sexual violence, slavery, patriarchy, and military & cultural hegemony for people of color around the world whose homes and families have been destroyed and drone-striked by the very person/former president whose campaign images this one seeks to replicate.

4. Know that the 50 stars represent 50 states where indigenous people were forcibly removed and systematically cleansed and assimilated — and that you cannot hold this flag in one hand and tweet #NoDAPL with the other.

5. Know that patriotism is not a form of liberation, but is inherently oppressive. Especially given the violent history of the birth of this country–and all others like it–on the backs of Black slaves (many of whom were Muslim) and indigenous genocide. Trump’s presidency is the logical outcome of the racist systems and institutions of white supremacy that this country was built on and this flag represents.

6. Know that Muslims are tired of having to “prove” they are American. But also, know that one does not need to be American to deserve respect, humanity, dignity, equality, rights, and freedom from hate and bigotry. An over-emphasis on being American as a prerequisite of deserving respect is harmful for immigrants and refugees. Especially under the new administration that already has plans of “extreme vetting” to prove American-ness. This is only pushing their agenda further. Also, see number 5.

7. Know that if the only time you are comfortable uplifting Muslim woman is when her image has been crafted by a white man and is draped in the American flag, I cannot call you my ally.

I understand the good intentions, but my liberation will not come from framing my body with a flag that has flown every time my people have fallen.
And I hope yours will not either.

quick note I: please know that Muslim women also have different relationships to symbols (be it a hijab or flag) and that I do not want to shame any Muslim woman for draping an American flag over her head or take that choice away for her to do so. Your bodies are your own, although your choices may still have an effect on a larger community. (See point 6).

quick note II: while I did not walk in the women’s march, I do think it was very important, despite having massive valid critiques. I encourage everyone who marched to do so again for Black lives and for Indigenous resistance and for immigrant justice and for trans rights and for international solidarity.
Please continue to stay engaged. Please continue to learn and grow, as we all have so much room to do so. Please do not let it be your last act of resistance. Please feel comfortable reaching out