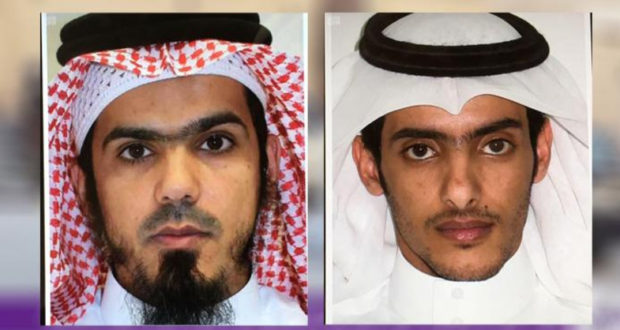 One of the two extremists killed in Saturday’s attack in Riyadh has been identified as Tayea Salem Yaslam al-Sayari, who has been wanted to plotting the attack on the Prophet’s Mosque last year.

Al-Sayari was said to have designed the explosive belts and other devices that were used in the attack on the Prophet’s Mosque in July 2016 as well as the attack on a mosque used by Saudi special forces in the southern Saudi city of Abha a month later.

Saudi security forces killed another wanted extremist named Talal Samran al-Saadi during the security operation in the Yasmeen district on Saturday, north of the capital Riyadh.

The security services had received information on the presence of the wanted men, carrying weapons and explosive belts in a house north of Riyadh.

The two dead fugitives were using the house in Riyadh to build explosive devices and suicide belts.

“They tried to escape from capture by exchanging fire with security forces that injured one officer. The two were also wearing suicide explosive belts,” Saudi Ministry of Interior Spokesman Maj. Gen. Mansour Al-Turki said during a press conference on Saturday night.

Several guns, one home-made hand grenade and suicide belts were confiscated from the house after the operation was completed.

Another Saudi ministry official confirmed more details behind Al-Sayari’s past.

“Tayea al-Sayari was a scholarship student in New Zealand in the past where he majored in engineering. He had gone to Syria to join ISIS fighters. Later on, he made his way to Turkey and then to Sudan and then to Yemen before coming back to Saudi Arabia to plot and design explosive devices that were used in two terror attacks last year,” the official said.