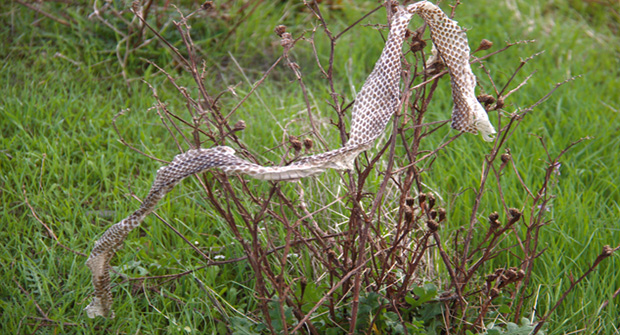 Balʿām changed from being a righteous man whose supplications were accepted into an iniquitous heretic who reneged on his faith. He was an individual who altered his righteous ways for a small stake of the worldly life, discarding and forsaking the āyāt (proofs and signs) of Allāh just as a snake sheds and discards its skin. It was an affair whereby the Shaytān pursued him until he was misled; Balʿām knew the truth but acted on the contrary. Allāh the Most High said,

And recite [O Muḥammad (sall Allāhu ʿalayhi wa sallam)] to them the story of him to whom We gave Our āyāt (proofs) but he threw them away, so Shaytān followed him up, and he became of those who went astray. And had We willed, We would surely have elevated him therewith but he clung to the earth and followed his own vain desire. So his description is the description of a dog: if you drive him away, he lolls his tongue out, or if you leave him alone, he [still] lolls his tongue out. Such is the description of the people who reject Our āyāt (proofs, evidences, verses, lessons, signs, revelations). So relate the stories, perhaps they may reflect.[1]

Thus it is evident that the following of hawā’ (desires), love of the world and an inclination to shahawāt (physical pleasures) is a cause for dissatisfaction and failure, with such love for worldly attributes being the means by which a scholar reneges on his faith.

Ibn al-Qayyim said in an explanation of the aforementioned verses: “There is a wonderful secret in resembling the one who chooses the fleeting world over the hereafter to a dog with its tongue out. The one who left Allāh’s signs and followed his desires did so because of his strong yearning (panting) for the world due to the disconnection of his heart with the hereafter. His yearning (panting) is like the incessant panting of the dog whether he is disturbed or left alone’. In continuance he said: ‘Allāh tells us in the verse ‘And had We willed, We would surely have elevated him’ that elevation is not merely with knowledge as is evident through the fact that this person was a scholar. Elevation is through following the truth, preferring it and seeking the pleasure of Allāh. This person was the most knowledgeable man of his time, yet Allāh did not elevate him with this knowledge, which in effect did not benefit him. We seek refuge from knowledge that does not benefit.”[2]

The disciples of Balʿām are indeed on this path. Ibn al-Rawandi (d.298), whom Ibn al-Jawzi named as the authority of heretics and apostates,[3] was paid four hundred dirhams by the Jews to compile a book which supposedly refuted Islām. He intended thereafter to produce a rebuttal once payment had been received. However, he desisted from doing so on sum of another hundred dirhams, rewarded on the condition that no such refutation be written.[4] Additionally, ʿAbdulllah b. ʿAli Al-Qusaymi (d. 1416) authored many works in support of Islām and the Sunnah but abandoned it all instead to become a preacher of apostasy and heretical doctrine. Some of his contemporaries noted the motivation for his abandonment of the truth as being his acceptance of bribes from the various warring religious factions,[5] and more significantly his austere living conditions in the past which impacted on his desire for wealth thereafter.[6]

The new followers of Balʿām are supported by foreign embassies and other factions either directly or via external agents, whereby they used the lure and adornment of the worldly life to transform a righteous individual into a malevolent being. Allāh says,

That is because they loved and preferred the life of this world over that of the Hereafter. And Allāh guides not the people who disbelieve.[7]

In addition, apostasy may also be caused by extreme passion and obsession with women. For this reason the Prophet (sall Allāhu ʿalayhi wa sallam) warned against the temptation of wealth and women: “The world is green and sweet. Allāh will give you succession therein and see what you do. Therefore beware of the Dunya (world) and beware of women. The first trial for Banu Isrāīl (Jews) was over women.”[8] It is reported that there was a pious man known for his righteousness named Sāliḥ who held the office of the mu’adhin (caller to prayer). Due to a momentary lapse in lowering his gaze, he briefly glanced at a Christian woman. This consequently led to him reneging on his faith and dying a Christian.[9] Furthermore, a warrior against the Crusaders, ʿAbduh b. ʿAbdur Rahīm, abandoned Islām, the Sunnah and jihād, and died a Christian due to his infatuation and intense love for a Christian woman.[10] Similarly, Ibn Hazm cited the story of An-Nazhām, one of the leaders of the Mutazilites who was obsessed and besotted with a Christian boy. As a result of this, he authored a treatise on the alleged superiority of the principles of Trinity over Tawḥīd (Islamic monotheism).[11]

Acquiescence to dubious matters and engulfing oneself in doubts results in apostasy and the abandonment of Islām.  As such, Al-Jahm b. Safwān met some polytheists known as the Sumaniyyah. They caused him to doubt his religion through a process of confusion, until he came to the point where for forty days it was unbeknownst to him as to who he worshipped. Subsequently, he declared his rejection of the names and attributes of Allāh (subḥānahu wa taʿālā).[12] As we also see in the case of Ibn Al-Rawandi, he used to keep the company of heretics claiming when reprimanded that: “I want to know their views”. However, as a result of such company, he manifested his heresy and took to attacking Allāh and the Qur’ān.[13]

Thus, as has been evidently demonstrated, it is incumbent to avoid places of apostasy and heresy whether this happens to be in the form of people, magazines, satellite channels, websites, conferences or symposiums. The exception is for those of qualification and knowledge who are determined to either expose such people or cause them to renounce their hypocrisy and disbelief. Imrān b. Ḥussain narrated that the Prophet (sall Allāhu ʿalayhi wa sallam) said, “Whoever hears about ad-Dajjāl must go away from him. By Allāh, a man thinking himself a believer will come to ad-Dajjāl and follow him because of the doubts he is sent with’.[14]

The new followers of Balʿām wander in the depths of doubt, the abyss of uncertainty, the gorges of confusion. Al-Qusaymi, before his admission of heresy, confessed that confusion and doubt unnerved him causing him to be physically restless and heated. In addition, the author of ‘the modern scientific revolution’ was overcome by the misery of scholastic theology which led to the utterance of heresy and doubt regarding Allāh the Mighty and Majestic. A third person, or type, regards doubt as a correct course while accusing Allāh with false claims concerning His decree and measures. Others embrace confusion and doubt, fervently following the Al maʿarrah dog, ʿAbul ‘Ala Al-Maʿarri, the author of suspicion and the conniver who attacked Allāh’s Deen.

The Deen necessitates submission and compliance to the revealed texts (Qur’ān and Sunnah) with a lack of opposition to them. Opposition is built upon proclivity, intellect or personal opinion, and none are safe in their religion except those who are delivered by Allāh from misguidance. It also necessitates secure and grounded knowledge of the Sharīʿah.

For even if the one grounded in knowledge were to be exposed to doubtful matters, the number of which is akin to the waves in the sea would still neither remove his certainty nor impair him with doubt. This is indeed because he is established in knowledge which quells the provocative ability of doubtful matters. Instead of overcoming him, such doubtful matters are repelled as they are surmounted by the custodian of knowledge.[15]

Decay of the inner self, and inward ruin lead to apostasy and a wicked demise. ʿAbdul Haqq Al-Ishbīli said ‘know that an evil end (we seek protection in Allāh from it) does not befall one who is outwardly upright and is internally correct. It only occurs to one who has a corrupted aqīdah (creed or belief) or persistently commits major and greatly depraved sinful acts, which may as a result overcome him until he dies unrepentantly.’[16] The epidemic of inner corruption is what has overcome the heretics over time. Al-Qusaymi, for example, was extremely arrogant and conceited. Such arrogance was found in his work al-Buruq an-Najdiyyah which began with flattering poetry and excessive praise for his own self, even though he was still occupied with Islām and knowledge at this stage in his life. Thus, when Sheikh ʿAbdul ʿAziz b. Bishr (d. 1359) came to know about the book he sensed in the author heresy and deviation from Islʿm (a process which unfortunately did occur).[17] However, this book is not the only example of his ghastly arrogance, for Al-Qusaymi wrote abhorrent verses praising his knowledge, some of which claimed that if his knowledge were to be distributed it would be just as adequate and sufficient as the knowledge of the Messengers.[18]

It is almost impossible to differentiate between Balʿām’s progeny and crooked individuals who write articles and theses which manifest their delusion and egotism, as well as other similar traits. They brag using complex terms and fervently express their ardour of foreign and unfamiliar expressions. This is so that they may hide behind ambiguous and deceptive arguments which reflect arrogance and conceit, things which reside in a ruined soul. The average reader may be intimidated by such ambiguous terms and difficult phrases, and they are in effect, as Ibn Taymiyyah said: ‘from the type of clattered [and nonsensical] speech of young boys and those similar to them for those who find them scary.’[19]

In conclusion, our pious predecessors from the first three righteous generations as well as those after them unrelentingly continued to battle against the heretics, exposing their secrets, revealing their hypocrisy and true colours. They warned the Ummah against these heretics while also elucidating and announcing Allāh’s judgment upon them in respect to their apostasy and abandonment of the faith. They established the evidence against them and executed the punishment for their apostasy. Thus, the least that can be done is to issue the correct ruling about them in accordance with Allāh’s ḥukm (law or judgement) clarifying their hypocrisy.

Nevertheless, we caution against haste and emotional impetuosity in responding to these heretics as this may result in negative consequences. Conversely, we also caution against being steeped into what is called ‘self-control’ which results in placating ones ardour for the faith and pacification of the heart in eagerness for the Deen. Never did the scholars of Islām detract a fiery and blazing passion, zeal and fervour of the faith from their understanding of being established in knowledge, having a wise character or even self-control!

[14] Reported by Aḥmad, Abū Dāwūd and Ḥākim who authenticated it.