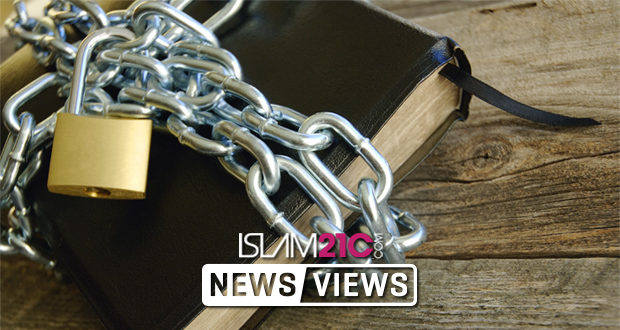 Communist China has once again exerted its authoritarian influence depriving the Chinese Muslims their rights. In the latest of a slew of prohibitions in a single year, including the ban on naming children with “overtly” Muslim sounding names, barring Muslims from the household registration system governing access to healthcare and education,[1] banning “abnormal beards”, forbidding parents to organise religious events for their children, prohibiting children from engaging in any religious activity,[2] Chinese officials in the Xinjiang Province have ordered every single ethnic Uyghur Muslim to turn in all religious items in their homes including prayer mats, copies of the Qur’ān and all other religious reading matter, including anything with the crescent moon and star symbol on it.[3]

Police made the announcements on the social media service WeChat instructing people to hand over these items voluntarily or else face punishment. This comes after Xinjiang officials began confiscating all copies of the Qur’ān published more than five years ago under the grounds of “extremist content.”[4]

Only a few months ago, a Muslim woman was arrested and detained for sharing a passage from the Qur’ān on Twitter.[5] According to an employee at a government-backed extremism watchdog, posting quotations from the Qur’ān or about God is “against the law”.[6]

The Uyghur Human Rights Project has asked China to respect international human rights standards on freedom of religion and to end the targeting of Uyghurs. However, the Muslims in China face harsh punishments if they do not comply.

The persecution the Uyghur Muslims are undergoing is appalling. In the face of such overt and visual persecution and genocide as experienced by the Rohingya Muslims and Syrian Muslims, it can be easy to look past the ‘soft’ oppression and dehumanisation of these Chinese Muslims; but oppression is oppression in all its forms.

“And they, to what they were doing against the believers, were witnesses. And they resented them not except because they believed in Allah, the Exalted in Might, the Praiseworthy, To whom belongs the dominion of the heavens and the earth. And Allah, over all things, is Witness.”[7]

What the Chinese Muslims experience today is reminiscent of the centuries of systematic Russian repression of Muslims between 1552 and 1762 through policies of exclusion and discrimination – as well as the destruction of Muslim culture by the elimination of outward manifestations of Islām such as mosques.[8] However, even then, the oppressors were surprised to find that the knowledge of the Qur’ān and the heritage of Islām could not be eradicated, for the Qur’ān was alive in the hearts of the scholars and those who learnt from them.

Their bullish attempts to dissolve the Muslim identity in China will not go unchecked either in this world or the Hereafter. And their attempts to destroy the existence of the Qur’ān is in vain as Allāh (subḥānahu wa taʿālā) says,

“But this is an honoured Qur’an

[Inscribed] in a Preserved Slate.”[9]

Previous: When to Fast the day of ʿĀshūra
Next: Five Spiritual Gems Muhammad Rabbani Taught us from Court