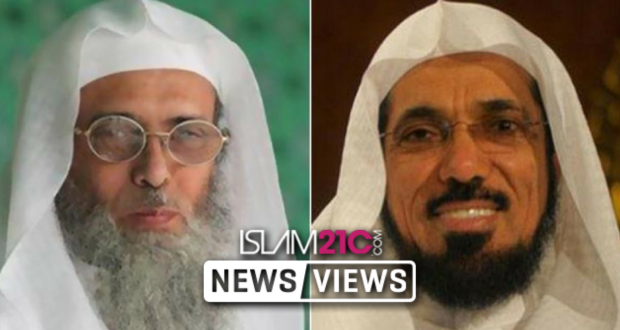 Reports have emerged suggesting that the medical condition of Sheikh Safar al-Hawali and Sheikh Salman al-Awda is deteriorating due to medical negligence according to the advocacy group ‘Mu’taqilī al-Ra’ī‘ or ‘Prisoners of Conscious’. [1]

In a tweet the group claimed that Sheikh Safar al-Hawali and his children have been pressured to disavow themselves from his book “Muslims and Western civilization”, and to claim that the book was not written by the Sheikh, in return for their release.[2]

Sheikh Safar al-Hawali and three of his sons were arrested on July 12th, a few days after the publication of the book attributed to the Sheikh, in which he imparts advice to the ruling family and the Council of Senior Scholars close to the monarchy.

In his book, the Sheikh criticises the ruling family in Saudi Arabia and the Crown Prince of Abu Dhabi, Mohammed bin Zayed. [3] The prominent Sheikh criticises the ruling family’s over-sized expenditure, saying it: “has been wasting funds on fake projects” and calling the Crown Prince’s cosy relationship with Israel a “betrayal”.

Human Rights activists have stressed that this form of blackmail is a “humanitarian crime and a blatant exploitation of the Sheikh’s deteriorating health.”

A previous report by Al Jazeera suggested that the arrest of Sheikh Safar al-Hawali was because of what was contained of advice directed at the Saudi Arabian ruling family, scholars and activists.

The ‘Prisoners of Conscious’ also reported that a number of scholars have been transferred from al-Zahaban prison to al-Ha’ir prison in preparation for their ‘trials’. [4] Many have expressed concern and fear that such trials may be conducted in secret and in accordance with the Saudi authorities Terrorism Act, inevitably resulting in hefty prison sentences.

The Saudi authorities have arrested scores of scholars and activists in what is seen as a significant shift in internal policy led by Crown-Prince Mohammad bin Salman. The measures have been dubbed by some as a precursor to introducing more secular-leaning laws. [5]

Sheikh Salman al-Awda was arrested in September 2017, because of what was allegedly a gleeful remark in which he invoked Allah to bring together the hearts of Muslims after the news of a telephone call between the Emir of Qatar Sheikh Tamim bin Hamad al-Thani and Saudi Crown-Prince Mohammed bin Salman. The Sheikh believed that the call would trigger reconciliation, only for the crisis to deepen further. [6]