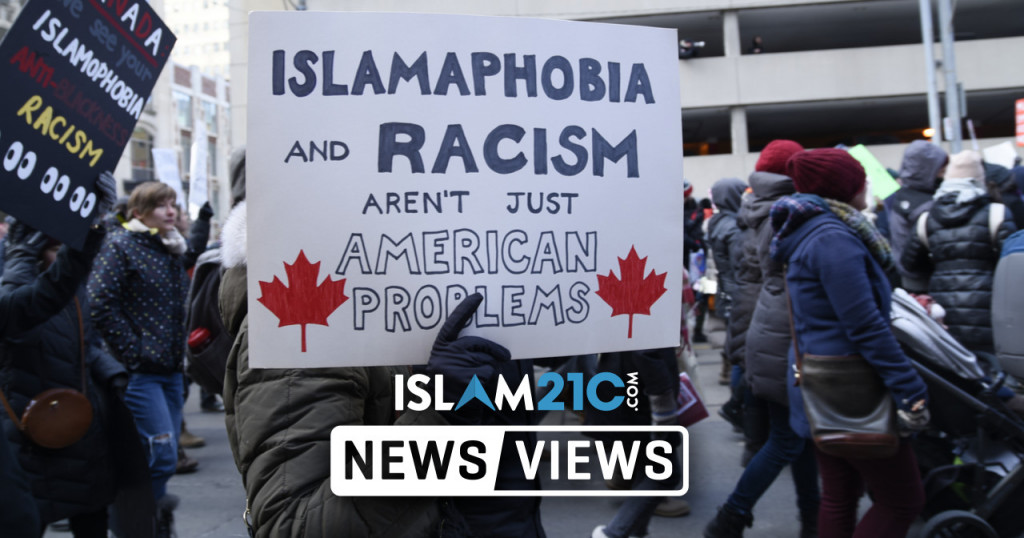 An anti-Islamophobia rally in the city of Toronto, Ontario. Photograph credit: arindambanerjee / shutterstock.com

Canada was considered to be the world’s most tolerant country in a comprehensive study conducted in 2015, which assessed 142 nations based on eight different indicators. However, it now finds itself in a serious downward spiral of violence against Muslims. The country has witnessed a sharp upsurge in Islamophobic attacks in the last few weeks. While Canada is often deemed to be the “freest country in the world” for its acceptance of immigrants and openness towards other faiths and beliefs, the reality now is beginning to look quite different. The country has now been rocked by cases of blatant Islamophobia, such as vandalism against places of worship, the slaughter of an entire Muslim family, and threats of violence against Muslim women. [1] [2] [3] [4]

After the tragic June 2021 case of a single Muslim family being mowed down by a terrorist in London, Ontario, [5] a new wave of chilling hate crimes is further increasing the fears of Muslims across the country. In the city of Surrey, British Columbia, the Royal Canadian Mounted Police (RCMP) began an investigation on Wednesday. This was after multiple hate messages had been found scrawled in various public areas, including a particular message left on a utility pole near a masjid. The despicable notes targeting Muslims were first spotted on July 5, and have begun multiplying in a number of locations since. Surrey RCMP Constable Sarbjit Sangha said that police suspect that the graffiti was drawn by either a single person or a small group of people. [6]

Sangha warned that the notes are unacceptable and pose as a challenge to the safety of the Muslim community:

“There is no room for anti-Muslim graffiti in our city…These types of incidents have a significant impact on the feeling of safety and security for members of our Muslim community.” [6]

“Hate crimes and hate-motivated criminal activity has no place in Surrey, and our officers are working diligently to identify those responsible for these incidents.” [7]

A volunteer with the Surrey Crime Prevention Society was flabbergasted as he supported the clean-up effort in the area. Jaspreet Jandu likened the situation to a dystopian reality. They argued that such acts of vandalism and expressions of hatred are unwelcome in the city of Surrey, which is located in the westernmost province of Canada, British Columbia.

“These are weird times we live in, and I honestly think the last thing we need is all this hatred and racism around the city.” [6]

“When we get these calls we try to respond as fast as we can, especially in an area like this. There’s a grocery store here, a dentist, an animal hospital — this is a family area and the last thing we really want is for people of the community seeing this sort of stuff.” [6]

In addition to the series of hate messages being investigated in Surrey, there has also been the shocking attack on the Baitul Kareem Mosque in the city of Cambridge, Ontario. On Wednesday, vandals ransacked the place of worship in broad daylight. Severe damage was reportedly inflicted, amounting to tens of thousands of dollars. The main entrance had been broken into, with the intruders destroying surveillance equipment and breaking kitchen appliances. [8]

A spokesperson representing the place of worship issued the following statement to reporters:

“We don’t know 100 per cent for sure what the motivation was behind the people who did this, but needless to say, as you can see from around us here, there was an element of hate for sure…

“We’ve had some great outreach by all of our neighbours and Canadians, people just dropping by today saying we heard about it, we support you and we agree with what they’re telling us, which is that this is just an act of a minority but something we need to address.” [8]

In addition to the vandalism at the mentioned place of worship and the numerous incidents of graffiti expressing hatred against Muslims, there has also been a horrendous incident in the city of Hamilton, Ontario.

On Monday earlier this week, a 26-year-old Muslim woman and her 62-year-old mother had been walking through a parking lot in the Ancaster Meadowlands neighbourhood, which is situated in Ontario. It was at this point when a vehicle reportedly pulled out of a bay and nearly ran over one of the women. The driver allegedly uttered Islamophobic slurs, which resulted in the traumatised women fleeing across the road and hiding behind some nearby bushes. The driver chased after them and issued death threats against them. One of the women screamed and ran for help, which caused the the man to drive away. [9]

I’m deeply disturbed by reports of an Islamophobic attack on Muslim women in Hamilton yesterday – and I strongly condemn this violent, hateful, and abhorrent behaviour. It has no place in our country or any of our communities. We will continue to stand together and take action.

A day later it emerged that the mother and daughter were family members of Kamal Gurgi, the Imam of Hamilton Downtown Mosque. A 40-year-old man by the name of Vince Licata was arrested on Tuesday, in connection with the crime. He faces numerous charges, which include the utterance of death threats, violating probation, and assault with a weapon. [9]

Immediately after the incident occurred, the local Muslim community expressed fear for the safety of their masjid leader and his family. The Hamilton Downtown Mosque’s president, Murshid Abdallah, issued the following formal statement:

“We are gravely concerned for the safety of our Imam’s family and the whole community in light of continuing social media threats.” [9]

In a statement shared with CBC News, the family involved in the shocking incident expressed an exceptional level of steadfastness and strength:

“We are shaken but unbroken after the attack on our family. Let us be clear: this individual attempted to terrorize our family…In light of the London attack, this is incredibly terrifying for our family. Enough is enough. The government must commit to taking stronger action. Our family could have been seriously hurt — and we cannot allow these things to keep happening.” [10]

These recent anti-Muslim attacks and expressions of hate reflect a generally increasing level of Islamophobic sentiments. UN Special Rapporteur on Freedom of Religion or Belief Ahmed Shaheed argued in March of this year that the amount of hostile feelings against Muslims has risen to “epidemic proportions”.  [11] [12]

Nevertheless, support for Muslims is still strong in Canada, with thousands having rallied in support of the four family members that were murdered in London’s hit-and-run case in June. Moreover, in early July the federal government announced that an emergency national summit on Islamophobia would be convened following the London terror attacks. The summit is scheduled to take place on July 22. [13]

Bardish Chagger, the Canadian Minister of Diversity, Inclusion, and Youth, noted the following in a statement issued on July 9:

“We must actively listen to the voices of communities directly affected by racism.” [13]