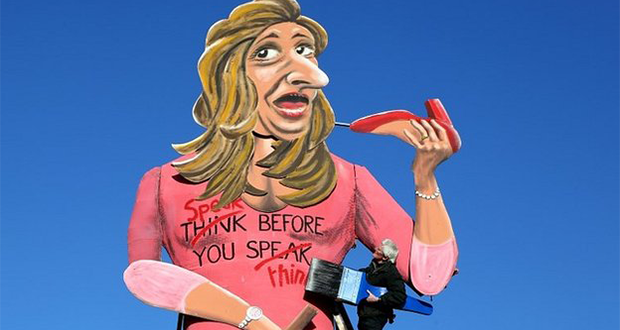 Yesterday Katie Hopkins let loose a barrage of Tweets which disseminated some of the most vulgar, ill-founded, openly abusive, and unprovoked commentary a public personality ever has. Though one may try to argue freedom of expression in her defence, it is important to remember that such a freedom is not an absolute right and definitely has its limits on the fringes of what constitutes criminal conduct.

In addressing the first allegation, it is fair to draw attention to recent events in Israel:

These are only a few of the atrocities committed by Israel within the restrained time-period of the past month. They do not justify the stabbing, however it is important to differentiate between individual actions attributed to an individual and actions committed by State actors. The first would under no circumstances warrant a sweeping generalisation, but the latter could arguably be constituted as an action condoned by said State or its people.

Clearly, Katie’s referenced event is an individual’s crime, whether provoked or not. Can the same be said for the institutional violence indiscriminately witnessed by, and targeted at Palestinians in that same time-frame (from apartheid, to disenfranchisement)?[5] [6]

With regard to the two-state solution and its relationship to Katie Hopkins’ backside, it would be reasonable to conclude that Israel has treated it with the same respect. The UN General Assembly, Security Council, International Court of Justice, High Contracting Parties of the Geneva Convention, and the Red Cross all consider that the Israeli settlements in the West Bank and East Jerusalem are illegal under international law; they are in direct contravention to the two-state solution set out by the United Nations, and the Fourth Geneva Convention.

Hence, we see a clear and unfortunate correlation between the parameters of Katie’s backside, and Israel’s.

The “filthy rodents” comment comes not only as an appalling insult to a method of living in strenuous conditions (contrary to popular belief, Hamas are not the only ones who use the tunnels), an inaccurate perception of their geography (the tunnels are in fact predominantly under Gaza), and a racially discriminant remark, but it is also quite easily an anti-Semitic remark as it deems the celebrated Polish Jews of the Warsaw Ghetto uprising who built tunnels and used the sewer system in order to smuggle food and weapons as “filthy rodents” within the same context- in fact, Palestinians are Semitic people, so it seems Hopkins herself fits quite well into any of either a modern or historic anti-Semitic outfit.

The closing sentence is an unfortunate public incitement of violent and potentially lethal action to thousands (as I am sure is Katie’s goal). Unfortunately, under International law, restarting a “bombing campaign” in response to an individual act by a non-State agent would be grossly and blatantly disproportionate (with no route for justification) and would see Katie’s favourite country on a swift road down a multitude of international sanctions.

“The police are singing down the same hymn sheet. Mohammed is going DAAAAAN. Allahu Akbar.”

In deciphering this tweet, and I hope I have done so correctly, I am assuming the police (in a certain TV show) had made a possibly fortunate move, and Hopkins is celebrating by proclaiming the criminal is going “down”. The flagrant offence she attempts to cause, and active partisanship shown through a mere 89 characters is not only in contravention to basic moral conduct, but also various UK laws, with particular regard to harassment, discrimination, hate speech, and abuse, especially when balanced in proportion to her celebrity platform and foreseeable reach.

However, to facilitate Katie with a feeling of success in such a contrived attempt at this point would be an insult to any conception of avid responsibility. In the end, I can only praise Katie’s attempt at Arabic by declaring her belief that “God is great”- maybe we can expect the Shahādah next?

“Father beats his daughter with an iron bar. But he is a good Muslim, prays in his cell & attends mosque. So that’s all happy days then.”

The deep-rooted sarcasm and implicit nature of this tweet on the other hand, when read in relation to her snub remarks in The Sun, cannot be overlooked. Katie seems to think that:

1. The pretext for inciting hatred here is ridiculous. If anything, the assertion is a paradox within itself; claiming to be a “good/ devout Muslim” in the current climate of affairs is more likely to be interpreted as “bad behaviour” than any mitigating factor for public opinion.

2. Alcohol is a factor in 40% of all crimes in the UK – alcohol faces a blanket prohibition in Islām;[8] of course this in no way contends that those who drink are a criminal threat nor that all “Muslims” do not drink, but it does immediately rule out a large statistical possibility of criminal cases having any real relevance to “Islamist” involvement.

Mathematically, the world’s latest poster-boys for “Islamist extremism”, ISIS, number at a generously estimated 31,500 members.[9] Compared to 1.5 billion Muslims worldwide, this does not equate to even a mere 0.001% of the global Muslim community, so to perpetuate the notion that Islām is a violent collection of sworn enemies to the West by utilising baseless generalisations is nothing more than a sad display of bigotry.

3. This view seems to be quite popular among those like Katie. It is as if reading any of the UK’s consistently employed terrorism legislationand reforms would be far too intelligent to be practical.[10] In a nutshell, it is legislation with an extremely low threshold for powers of detention, conviction, or deportation, even occasionally resulting in miscarriages of justice or prolonged detentions with no charge.[11]

Also escaping notice is the number of cases brought by the UK government in tackling extremism,[12] with a contentious number of Muslims, mosques, and Islamic schools targeted on a daily basis. Perhaps the fact that innocent Muslims are 42 times more likely to be stopped for a ‘stop and search’ under counter-terrorism measures in an airport is not enough for Katie Hopkins,[13] her satisfaction would probably require prescribing a new set of Nuremberg Laws for Muslims in Britain.[14]

In conclusion, though Katie’s views are eloquently put, grammatically coherent, and substantially humanitarian, there seems to be some gaps in factual validity. I would recommend education outside the scope of a television set; actually going out and meeting or talking to a real-life Muslim would be a good start – in an airport perhaps, where we have all already been thoroughly searched and declared safe for human interaction.