One month on: reflecting on the Chapel Hill shootings 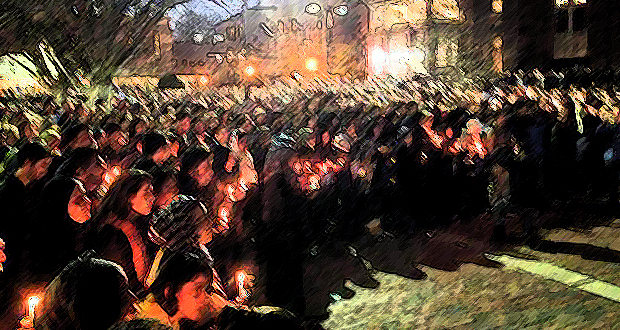 One month ago today, the utterly ghastly and fatal terrorist attack on three young and dynamic American Muslims in a quiet college town in North Carolina was met by an almost freakish silence on mainstream media.

Before their promising young lives were tragically ended by a gun-wielding Islamophobe, they were raising funds via a web page to provide free dental care to refugee children in Syria. Deah had also previously worked voluntarily with a charity providing emergency dental aid to children with special needs in Palestine.

Their killer, who brutally shot each of them execution-style in the head, was Stephen Hicks, a 46 year old white American male and a self-confessed religion hating atheist.[2] Pictures on his Facebook profile included many snaps of him showcasing his revolver. In the aftermath of Hicks’ deranged and demonic attack and arrest, his wife defensively labelled this inhumane act a reactionary response to a random parking dispute.

On the other hand; while maintaining utmost dignity and composure in the face of such a senseless and mind-numbing tragedy, the victims’ families dismissed this “parking dispute” theory and said that their inconsolable personal loss was the result of a “hate crime”. [3] According to them Hicks had targetted this young family before and his gun-toting demeanor had made the three innocent victims uncomfortable and fearful. Compare the culture of mitigation [4] in the mainstream media when Muslims are the victims of crimes—which attempted to turn this murder into a parking “dispute”; to the hysteria and misrepresentation when advocacy group CAGE suggested that the British security services should be held accountable for their hand in harassing disenfranchised Muslims. [5]

It is not surprising to note that this violent wave of Islamophobia sweeping across North America and Europe is only gaining in momentum. Hollywood movies like the recently released “American sniper” are not helping matters either. The generalisation of Muslims as “savages” and “vermin scum” that must be maimed and murdered as a playful hobby is a dangerous ploy to incite violence and reactionary behaviour.[6]

Let us visualise this utterly senseless tragedy in a different context. Had the killer belonged to an Islamic background, the first breaking news aired would have merged the two words “Muslim” and “terrorist” together to market the incident as a well-planned terror attack that was perpetrated by a group of ideologically driven extremists.

In a profound highlighting of their ever-persisting hypocritical behavior, some of the most globally well-known media outlets provided minimal coverage to the “Chapel Hill” incident and it was only after social media erupted in a hashtag protest that they began to wake up from their slumber.

World leaders who had so vehemently condemned the preceding Charlie Hebdo murders and marched arm in arm to vouch support for freedom of expression, displayed minimum resolve to eliminate the root causes behind such savage attacks. Where were their messages of assurance and support to the bereaved families and the wider community? Where was that overwhelming sense of urgency to make an example out of the killer and countless others who may share his demented ideology?

Targeting of innocent civilians, irrespective of the religion or ethnicity of the perpetrator, is an indefensible act of terror that deserves no justification. Islām, as a religion, clearly condemns any such act and has laid down noble rules and regulations both for times of peace and war.

However, despite these noble teachings that are attracting countless new reverts to Islām annually, we are faced by an increasingly two-faced global phenomenon. Any act of criminality committed by an individual or a minority group of Muslims is blamed on the fundamental teachings of Islām. Resultantly, Muslims invited on mainstream media in the wake of any such event are expected to react apologetically and condemn the actions of a minority.

Yet, if one may ask, which religion or crazed ideology has been blamed for the hundreds of thousands of civilians killed as part of the “collateral damage” rhetoric in Iraq? Sophisticated killer drones murder more innocent civilians than militant targets, yet have we ever heard a religion or an ideology being blamed for their unabated killing spree? Does the regular and inhumane bombing of Gaza and the cold-blooded, mass murder and incarceration of its citizens find its moral basis in some religious doctrine?

Similarly the continued violence against the minority Muslim Rohingya people at the hands of the Burmese junta has never been related to Buddhism as a faith nor was the murder of thousands of Muslims in Gujrat pinned on Hinduism for promoting a fanatic ideology amongst its followers.

Sensibly so, actions of a minority must not be generalised to make sweeping statements. But why is the same treatment not accorded to Islām and its adherents? Why are we expected to wear tags labeled “moderate Muslim”? Why should we be shunning the fundamentals of our faith in the name of integration and wider communal acceptance?

These are some thought provoking and pertinent issues that arise out of the aftermath of this extremely disturbing tragedy.  Bigotry, intolerance and double standards in the dissemination and reporting of information and war-laden foreign policies will continue to exacerbate this cycle of senseless violence that consumes such valuable and precious lives as that of this selfless young family in Chapel Hill, North Carolina.